Stephany Wilkes shears a 150-lb Targhee-Columbia ewe at Hopland Research and Extension Center.
It's May in Hopland, and the sparse winter rains are nothing more than a memory. Sharpened shears at the ready, Stephany Wilkes, an information science Ph.D. who works for Mozilla, walks a 150-pound sheep into the shearing area. Under the watchful eye of expert instructors, she flips the sheep on its side and starts methodically removing the fleece, smoothing the skin with her left hand, clippers in her right, moving the sheep with her legs.

“It's like a dance,” she says. “Once you have it right (and I mean, really have it), suddenly the whole method makes sense. You expend much less energy. You're controlling the sheep with your legs, which leaves your hands free, one to hold the shearing hand piece and the other to smooth out the skin so you don't nick the sheep.”

Since there are 400 ewes whose fleeces must be shorn before the hot summer months, that's important for her and her classmates.

The University of California Cooperative Extension Sheep Shearing School is the only program of its kind in California. It has been run in Mendocino County since at least 1990, but in 2009, it moved to the Hopland Research and Extension Center south of Ukiah.

Students are taught the New Zealand method of shearing, where the entire fleece is cut from the sheep as a single unit so it can be sorted and graded according to micron count. The method is designed to be comfortable for both shearer and sheep.

John Harper, UCCE natural resources advisor for Mendocino County, has been running this program for more than 20 years. Although these sheep weigh enough to make handling them a workout, he says that hip flexibility is more important than upper body strength. Since this is something women tend to have more of than men, they are often successful students.

More than 250 students from across the western U.S. as well as Canada and Mexico and have graduated from the program. Many come back year after year to practice under supervision, but also to connect with each other.

This year, a wool grading section was added to the course, taught by Ron Cole and Rodney Kott. Sheep have recently been bred much more for meat than wool in the region but there is a growing demand for high quality fleeces. The finest merino sheep do not do well in damp North Coast conditions but thrive in the dryer Central Valley and foothills, and there is a need for trained graders. Only 3 percent of California's 5 million pounds of wool is currently being processed within the state, and yet California remains a net importer of wool goods, while falling second only to Texas in sheep production. California fleeces are either composted or sent to China for processing, something another graduate of Shearing Class, Matt Gilbert, is keen to avoid.

“There used to be lots of mills in the U.S. to process our wool,” he said. “Now there are hardly any. That's why I wanted to start my own mill to process fine wool. We will be selling to handspinners and knitters and to commercial textile manufacturers. It's about trying to keep the product of this place in the region.”

Gilbert was inspired by the Fibershed movement started by Rebecca Burgess in 2010. Drawing on the locavore movement, Burgess committed to clothing herself for an entire year with textiles grown and produced within 200 miles of her house in Fairfax. The movement is gaining adherents across the country and beyond.

Wilkes says the Fibershed movement is what got her interested in learning to shear, too.

“Eight years ago, I walked into a yarn store in San Francisco and asked where the local yarn was. I knew California was a major producer of wool. I was told there wasn't any. I was curious about why, and became involved with Fibershed and attended their first symposium in October 2012. During a panel involving shearers [one of whom was Matt Gilbert], I found out that small flock owners had a hard time finding people to shear their sheep. That got me thinking that I could learn to do the work," Wilkes said.

The UC certificate really means something to ranchers and farmers. As a woman who provided a Shearing School scholarship put it recently, “When I see UC Certification, I know I'm not going to have butchered animals.”

Harper explains that the North Coast sheep herding trends have changed over time – from large producers to smaller flocks – but now there is a move back to some larger flocks, driven in part by the Vines and Ovines project established in Mendocino County by UCCE advisor Morgan Doran with help from UCCE advisor Roger Ingram of Placer and Nevada counties, UCCE advisor Stephanie Larson of Sonoma County and UCCE specialist emeritus Mel George. The sheep were subjected to aversion training so they would not eat grape leaves. Now they browse through vineyards, conducting weed control and fertilization without harming the vines. One vintner, Clay Shannon, has 1,500 ewes. He pairs premium lamb with his wines in sales to niche markets. The idea is catching on.

Meanwhile, Wilkes is shearing sheep across Northern California on weekends or before work.

“I can't express how much Shearing School means to me and to California,” she says. “There's almost no way to break into agriculture if you didn't inherit land here. I found my calling late ... I love developing open source software and working on information privacy, but shearing is my passion. Shearing School is one of the few feasible avenues into agriculture in the state.” 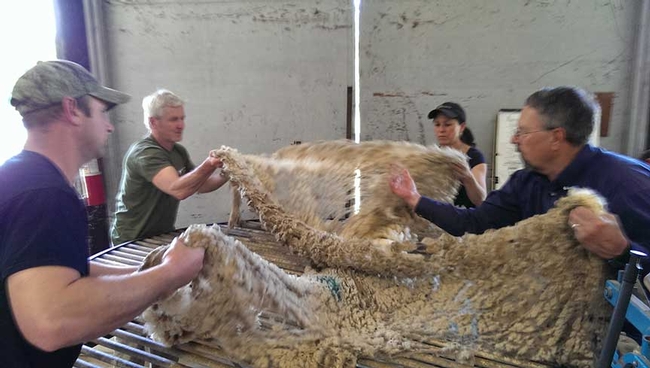 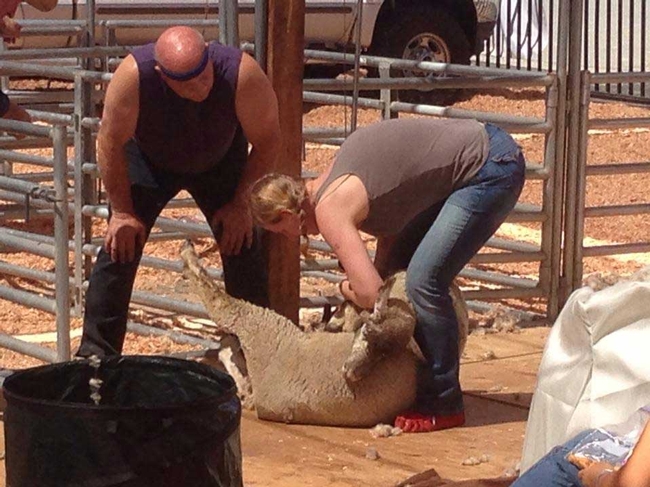 Wondering when your next sheering class? How early can we sign up?
How long is the course and is room and board included in the fee?
by John M Harper
on August 19, 2015 at 9:35 AM
Tommy, thanks for your interest in the shearing school. To get information on the school go to: http://cemendocino.ucanr.edu/Sheep_Shearing_School_/.

Fill out the survey and then when registration starts around the first of the year we contact you. The course is 5 days. Room & board is not included. We provide lists of local hotels and restaurants. Some students have camped at one of the campgrounds near Hopland but most want a hot shower and a good bed after shearing all day.
Leave a Reply: