Figure 1. Oozing produced by fungal infection of a cherry branch pruned during a previous cool season.
Most people think about pruning fruit trees during the winter since the branch structure is most visible and winter is considered the traditional time to prune deciduous trees. Actually, pruning fruit trees mainly during the growing season is a good practice and with some species such as apricots and cherries, pruning between September and March in northern California could lead to detrimental canker diseases.

Cherries, apricots, and a few related species are particularly susceptible to fungal and bacterial canker diseases, including Eutypa dieback, Botryosphaeria canker, and bacterial canker. Pathogens can be spread by rain or tree wounds – such as pruning wounds – during wet weather; subsequent infections spread through the wood for several years and may eventually kill the tree. When trees are infected, limbs or twigs may wilt and die suddenly in late spring or summer with the leaves still attached. Bark may be darkly discolored and amber-colored gumming may ooze (Figure 1). Infected areas in the interior of the wood are discolored brown (Figure 2) sometimes in wedge shapes; with bacterial canker the cambial area will turn red or speckled red and then brown. To remove such infections, cut infected limbs at least one foot below any internal symptom of the disease, preferably during the dry season when infection risk is lowest.

The best practice is to avoid pruning these susceptible species during the typical rainy period from September through mid-March. Rains after March can still lead to infections although tissue susceptibility to disease decreases with warmer weather. However, it is best to avoid pruning altogether until at least late spring.

If growth is very vigorous, the first summer pruning can be done in late May or June, at which time many strong upright shoots can be removed to allow sunlight to reach lower fruiting branches. Doing the final pruning in July leads to excessive regrowth later that summer. The main or final pruning should be in August, but heavy pruning, especially at that time of year, may lead to sunburned branches, so leave spurs and some other shoots to provide some shade. Alternatively, whitewash west- and south-facing branches with a 50:50 mixture of interior, white latex paint and water to prevent sunburn. 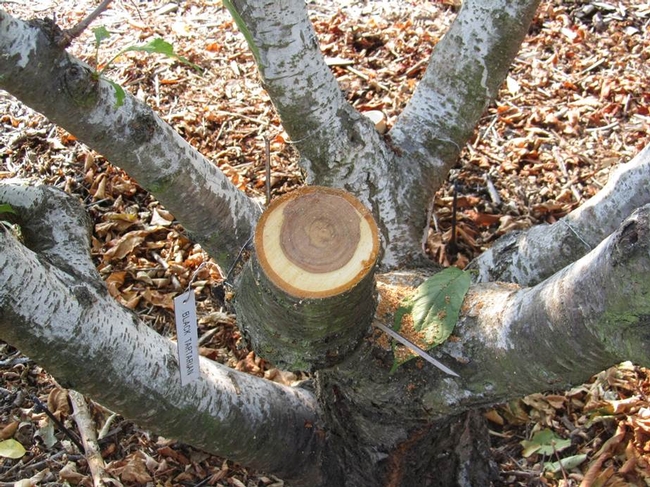 Figure 2. A cross-cut into the infected branch reveals a large fungal canker in the wood; the infection continues into the trunk.
Tags: apricot (4), canker (4), cherry (6), pruning (7)
Comments: 0
No Comments Posted.
Login to leave a comment.