"I don't think there's been another case where I've seen him so really ticked off," said insect pathologist Brian Federici of his colleague plant biotechnologist Alan McHughen.

Federici said he was also annoyed by the article, which he called "bad science."

The scientists' frustration led to the creation of a rebuttal letter that was eventually signed by the duo and 10 other scientists and published in the January 2008 edition of PNAS. This letter and other dissent from scientists around the country is still fresh enough to elicit a detailed account of the controversy in the current issue of Nature.

The article in question, "Toxins in transgenic crop byproducts may affect headwater stream ecosystems," said that, in laboratory studies, caddis-fly larvae that fed only on Bt maize debris grew half as fast and died at more than twice the rate as those that ate debris from conventional maize.

"The work is so bad an undergrad would have done a better job. I'm convinced the authors knew it had flaws." - University of Georgia crop geneticist Wayne Parrott

The author's use of evidence "arguably amounts to investigator misconduct." - Henry Miller, research fellow at the Hoover Institution in Stanford, Calif.

"They absolutely went too far." - Randy Schekman, editor-in-chief of PNAS.

"When bad science is used to justify bad public policies, we all lose." -UCR's McHughen.

The authors of the PNAS article stand by their work. "We believe our study was scientifically sound although many questions on the topic remain to be answered," they wrote in an e-mail to Nature. 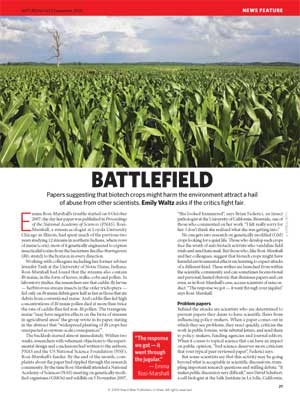