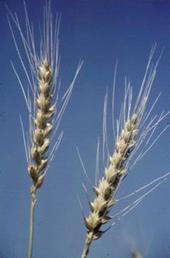 A ballot measure approved by voters in a single southern Oregon county to ban genetically modified crops is expected to have far-reaching impacts on agriculture, reported Mateusez Perkowski in Capital Press. The new law is expected to spur lawsuits against growers of conventional crops, court cases that will be closely watched by scientists trying to solve farm problems with genetic modification.

"We could do millions of things with transgenics, but we have our hands tied," a story in

Size comparison of an AquAdvantage Salmon (background) vs. a non-transgenic Atlantic salmon sibling (foreground) of the same age.

Scientists have been breeding genetically modified animals for decades, and assert they are perfectly safe, but to date none has been admitted into the U.S. food supply, reported Jef Akst on The Scientist.

The article reviewed the case of Enviropig, which was modified to produce lower levels of phosphorus in its manure, an environmental benefit because phosphorus can leach into groundwater beneath pig farms. The transgene also eliminates the cost of adding phosphorus to the animals' feed. Anti-GMO activists voiced loud opposition.

"They really targeted it and made it a bad thing," said

The New York Times reported on a heated debate on the Big Island of Hawaii late last year about a proposed law that would ban the production of genetically modified organisms by farmers in that part of the island state.

The story describes a lone councilman's effort to get science-based information in face of vocal opposition to GMOs among advocacy groups. The lack of input from farmers and scientists on policy issues that affect food and farming has rankled many agircultural scientists, including Pamela Ronald, professor in the Department of Plant Pathology at...

“The beauty of our proposal is that carbon dioxide emitted into the atmosphere as a byproduct of combustion of these bio-fuels would be captured again by tobacco plants and, through the natural process of photosynthesis, be converted back into fuel," said Anastasios Melis, professor in the Department of Plant and Microbial Biology at UC Berkeley.

Some bacteria and algae turn sunlight...