The following is a summary of further comparisons of baiting techniques for the spotted wing drosophila Drosophila suzukii.  Previous posts have evaluated the use of various fruit purees and other mixes and these have determined that a mixture of one 2.5 oz packet of yeast + 4 teaspoons sugar + 12 ounces of water distributed in four or five Mason jars were very effective in monitoring and evaluating infestation levels of spotted wing drosophila.

Another test of baits was run last week.  Traps (a 500 ml Nalgene bottle with 4 holes in the lid) containing one pellet torula yeast (see photo below) dissolved in 100 ml water, the yeast + water + sugar bait mixture mentioned above and finally a commercial “filth fly mix” called Yellow Muse (AgBio Corporation) allowed to cure for several weeks (the fermentation process of this material may be important) were placed November 3, evaluated November 6 and then again evaluated November 9.

The results are shown below (numbers in columns refer to average numbers of flies captured in each trap):

From the chart above, it is apparent that the torula yeast is not very attractive to spotted wing drosophila, while yeast + sugar + water continues to be, along with well cured Yellow Muse filth fly mix, the most useful. 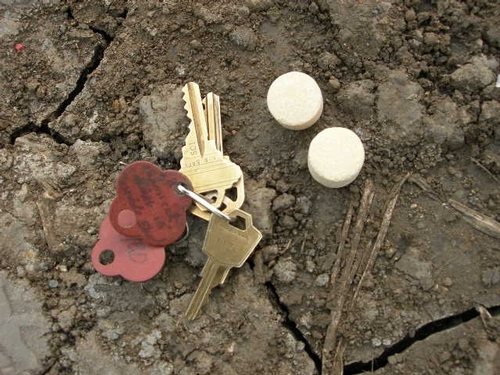 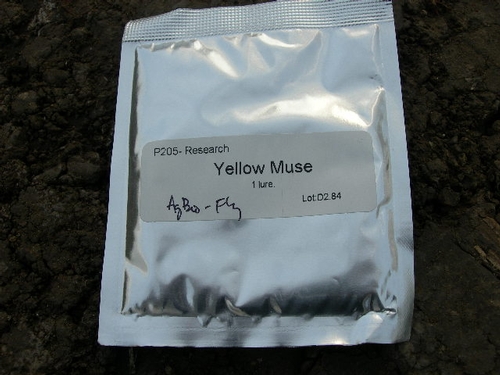 Never did try that specific combination, but bananas (fermented with beer) were uninspiring. Remember too that this mixture could be a chore to service and find flies in. Do you have any results with that? Well aged Yellow Muse or the yeast, sugar + water worked very well through the summer. Reading the translations of the original Japanese work done in 1936 and 1939 indicate good rates of capture with red wine or sake, depending on the season.
by Mark Shimozaki
on February 10, 2010 at 11:02 PM
I have used apple cider with banana slices placed in a fly trap. Caught many fruit flies but no SWD. These traps were placed in winegrape vineyards near known SWD infested cherry orchards. Placement was in the month of July and August in Lodi. The concern of course was SWD infesting winegrapes but no problems in 2009. Now 2010 and we are very concerned with this years cherry crop. As you know, Cherries were infested late in the season. The battle plan is multiple sprays with malathion and or Delegate . OUCH !!!
Any other ideas ?? HELP
by Mark Bolda
on February 11, 2010 at 10:35 AM
Hi Mark,

The person to speak with would be Bob Vansteenwyk at UC Berkeley who has taken the lead on SWD management in cherries. My understanding is that sprays would be initiated at first fruit color or first detected fly, but it is best to check with him or your local farm advisor to make sure.
by James Finley
on April 5, 2010 at 12:18 PM
Hi Mark,

Does the torula + sugar + water mix use the same torula yeast tabs you pictured? Or is it a different kind of yeast?
by Mark Bolda
on April 7, 2010 at 8:51 AM
James it's a different kind of yeast. We use the Fleischmann's baker's yeast you can get in the store. Be sure to give it some space when you ferment it, the amount of yeast plus sugar in the mix sets off a powerful fermentation process which lasts about 24 hours. After that, it is ready to be used.
Mark
by david tarver
on November 7, 2010 at 9:28 PM
I would like to try your torula pellets(yeast) Please contact me at the above address
Leave a Reply:

Hot on the Trail of Zythia in Strawberry
December 23, 2020