Avocado is a tree that has a good ability to respond to fire damage, if it is not too extensive. However, often a tree will recover only to collapse later on in the year or years because of the damage. So a tree may appear to do well and then suddenly collapse. In an orchard setting, fire damage can kill one tree completely, whereas the one just beside it recovers completely. This poses a major problem with irrigation management. How to irrigate the slowly regenerating tree that gradually needs more water, less frequently, next to trees that are recovering at a different rate or not at all. This becomes a management nightmare. Often the result of the difficulty of water management, the remaining trees develop root rot and they eventually die from that and not the original fire damage.

There is a general rule of thumb I have learned and used – when more than 50% of the trees have succumbed, it is best to replace the whole orchard. This is due to the issues of irrigation management and the loss of return from the unused portion of the grove.

So, from a pure economic management aspect, where there is any fire damage, that area should be considered a loss. If you look at your aerial survey and just measure the areas that show fire damage and take that as a proportion of the total planted area, you should be able to assess the extent of the damage incurred in the fire. So measuring the brown areas relative to green should give you a good assessment of the damage incurred in the fire.

It may be possible to nurse back individual trees with a lot of attention and if it's a small enough area, go ahead. But on commercial scale of acres, it often doesn't pay from a management point of view to nurse the orchard to an economic production level. 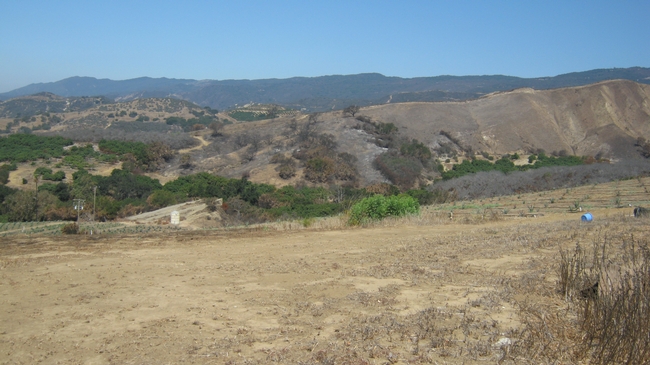