The following article is from the UCCE Tree & Vine News newsletter (Jan. 2017).

According to the 2014 USDA-NASS Organic Survey, Washington State was the largest U.S. producer of organic apples, har­vesting 429 million pounds (over 90% of U.S. fresh production) from about 14,000 acres, with an estimated farm gate crop value of $210 million. In Oct. 2016, I spoke at an organic orchard floor workshop held in Wenatchee, WA, that covered organic weed and nitrogen management (view a PDF of the presentation here). This article is a summary of the practices commonly used in central Washington where organic tree fruit production is concentrated.

The nitrogen (N) and weed fertilization programs for most organic tree crop growers in Washington are often interconnected in that tillage for weed control incorporates the compost and fertilizer. Many growers use the most cost-effective N strategy, currently con­sisting of “composted” chicken manure, ap­plied in fall and/or spring, plus supplemental feather meal or other higher concentration N fertilizer, generally applied in spring. See Table 1 for a list of selected compost and or­ganic fertilizer products available to growers.

The manure is composted enough to kill pathogens for food safety concerns, but not enough to immobilize all the N in organic matter. Most finished compost has about 1.0 to 1.5% total N and the N is slowly mineral­ized in the soil over many years, so it is not considered a fertilizer unless used for many consecutive years. But the chicken compost coming from in-state and out-of-state farms often has 3-4% total N, and plant-available nitrogen will be about 50% in the first year, compared to about 10% for finished compost. Typical application rates are 2-3 tons per orchard acre, concentrated in a 10- to 20-inch band on either side of the tree row and usually not in the grass alley. A 2-ton applica­tion of this chicken manure at 3.25% N and 25% moisture content may contain nearly 100 lbs. of total N. In the first year after application, it will likely provide about 50 lbs. of plant-available nitrogen per ton applied, assuming it is incorporated the day it is ap­plied. Growers should obtain recent nutrient analyses of compost and manure products and should also know the % moisture.

About a quarter of the total N in the chicken manure product may be present as ammonium, which is subject to rapid loss to the air (as ammonia gas) if not incorporated into the soil with tillage, or through irriga­tion. Once in the soil, the ammonium quickly converts to nitrate, which is taken up by tree roots and can also be lost to leaching if over-irrigation occurs. This available N is ready for tree use shortly after application, while the slower release N will be available during the rest of the year and in subsequent years.

With an organic N source, getting the timing right can be challenging. Trees assim­ilate N from the soil when they are actively growing (spring and summer) and not during the dormant season. There is generally heavy demand in spring to supply N for the new vegetative growth, and in late summer or early fall to build tree N reserves for the next spring. Past research has shown rapid uptake of available N a few weeks before apple har­vest without affecting fruit quality compared with little tree uptake later in the fall when the trees are senescing and heading into dormancy. Fall applications can result in sub­stantial loss to leaching over the winter as soil temperatures are still generally high enough for conversion of some N to the nitrate form, which is not held by the soil.

Manure and compost bring in other nutri­ents and harmful salts. Some growers are finding that phosphorus (P) becomes exces­sive – a ton of broiler litter containing 80 lbs. total N/ton will also contain about 60 lbs. of P2O5 (26 lbs. actual P), and P not taken up by plants tends to accumulate in the soil. Very high P levels in the soil can interfere with availability and uptake of other nutrients, especially iron and zinc, which could lead to plant deficiencies. There are now more spe­cialty fertilizers from which to choose that only apply the targeted nutrients, and some organic growers are using these and reducing or eliminating compost applications. But compost applications can be made every 2-3 years to maintain the “carbon” cycle and pro­vide a food source to keep soils biologically active and diverse.

The most common method of weed man­agement in organic orchards in the region is with a Wonder Weeder, which is a Lilliston-type rolling cultivator (Fig. 1). This imple­ment is fixed so it has no hydraulic arm retraction to move it back and forth into the tree row, as a Weed Badger or similar im­plement does. But it does have a steel spring shear bar that cuts off weeds between the trunks at ground level and then bends back when it contacts the trunk to avoid damage. This can work well in older trees with wider in-row spacing, but is not well-suited to trees closer than 4 feet apart in the row. Care must be taken with young trees as they can be damaged by the shear bar. Use in cherries is limited due to concerns about bark wounds that could lead to bacterial canker infection. In the center of the tree row, a Weed Badger or other articu­lating cultivator is more effec­tive for large weeds and perennial weeds (Fig. 2). In-row cultiva­tion has the added benefit of disrupting rodent tunnels. Where drip tubing is used (usually with inverted microsprinklers), the tubing must be sus­pended above the ground to prevent damag­ing it with cultivation (Fig. 3). Suspending the tubing is easiest in trellised high-density orchards.

In-row tillage implements operate at about a 3-4 inch depth to kill weed crowns, but this also cuts some tree roots. For this reason, a few growers use wood chip mulch (applied with a commercial mulch spreader) as an alternative to tillage, which provides a healthy environment for tree root growth and supplies nutrients as it slowly breaks down (Fig. 4). The wood chips, which need to be re­applied every 1-3 years to provide on-going weed control, are effective against an­nual weeds and are generally not conducive to vole tunneling. Wood chips do not control most perennial weeds. Some growers instead use landscape fabric, which provides more durable weed control but creates attractive vole habitat and cuts the soil off from any carbon inputs. To address this, the fabric can be opened during the winter to expose the voles to predation and to allow for compost or other amendments to be applied. This is a costly process, but the fabric can provide more control of certain perennial weeds such as quackgrass than other methods. For both methods, cultivation adjacent to the mulch may be used to incorporate the compost and fertilizer (Fig. 5), but then roots are still cut and the cultivator cannot come too close to fabric – this leaves a line of tall weeds that hide the fabric edge. The weeds can be mowed, but the mower can catch and shred the fabric.

There are several other weed control tac­tics that might be combined for more effec­tive weed control. Growers have renewed interest in the “mow and blow” method, in which the mower moves clippings to the tree row, suppressing weed seed growth and adding residue that breaks down to feed mi­crobes and add nutrients. If only a thin layer is periodically applied, the clippings will not provide cover for voles but also may not con­trol weeds as effectively. Propane flamers desiccate leaf cells of primarily broadleaf weeds, but flamers have worker safety con­cerns and high fuel costs. Organic herbicides that are currently available can help, but they are generally expensive and not reliably effective, especially on grasses.

During the three-year transition to or­ganic production, leaf N and production often decline significantly. An important cause of both problems is likely insufficient N uptake. No-till in our orchards has many benefits, but applying manure to soil without incorpora­tion may result in reduced mineralization of N as well as substantial loss of N to ammonia volatilization. Even if incorporated the same day, up to 25% of the N may volatilize during transport, loading, spreading, and sitting on the soil (ammonia smell). Delaying just one day may result in a 50% loss of the volatile ammonia N. Irrigation with a least ½ inch of water within a few hours can wash ammo­nium-N into the soil and reduce volatilization losses, but incorporation retains more N. Studies show that manure should be incorpo­rated or irrigated no more than 6 hours after application for poultry manure and 12 hours for dairy manure. However, with no accom­panying weed control, the resident vegeta­tion will quickly outcompete the tree roots for much of the N. Banding and the use of partially composted manure would likely reduce some ammonia volatilization. An obvious solution is to simply use more manure, but this adds to the high cost of organic fertilization.

Some growers alternate Wonder Weeder and Weed Badger to control different weeds and disrupt rodent tunnels. But cultivators may also damage buttress roots, which come from the root flare at the base of the trunk. New tools being used in Europe, such as weed brushes, have not been tested much in the U.S. but might be a good addition for organic orchard systems. Winter annual leg­umes in the alleys can be a major source of N. Winter annual legumes are another option in the Sacramento Delta. Currently, no one prac­tice is going to provide satisfactory long-term organic weed control. Approaches that inte­grate multiple weed control tactics along with fertility considerations are needed.

Thanks to David Granatstein (Center for Sustaining Agriculture and Natural Resources, Washington State University) for providing assistance on this paper. 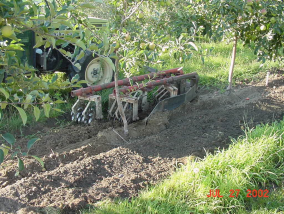 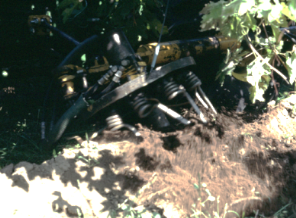 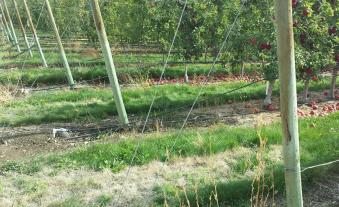 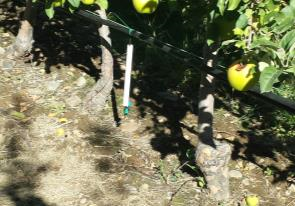 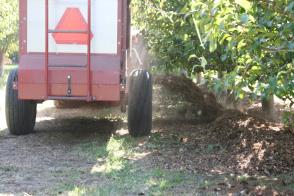 Figure 4. Spreading wood chips (normally the spreader would be set to apply a wider strip) 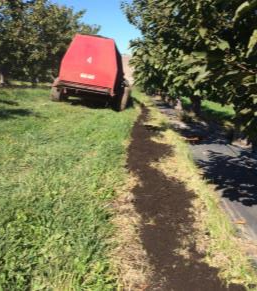