At a recent Fresh Index-sponsored meeting, David Crowley recently of UC Riverside talked of a five year-long study that assessed nutritional status and yield. This has been a study area that has long been confused by the problems of alternate bearing, weather-dependency of the avocado, soil variability, root rot, etc. etc. etc. that we all know about. There are nutrient interactions that confound results, as well. High phosphorus affects micronutrient uptake of zinc, copper and others. Zinc impedes copper uptake. Loss of roots from Phytophthora especially affects micronutrients. Irrigation and aeration again affects nutrient uptake, and especially micronutrients.

The elements coming from the soil are divided into primary nutrients, secondary nutrients and micronutrients. This grouping is based on the relative amounts required by plants, but all are essential. Crowley describes the relative need for each element being based on the “Law of the Minimum”; if only one element is deficient it eventually affects growth and yield of the entire plant in a negative manner. It doesn't matter how much the other nutrients are raised, if one is limiting, growth is limited by that one. The primary nutrients required by avocados are nitrogen, phosphorus and potassium. The secondary nutrients required are calcium, magnesium and sulfur. The micronutrients are zinc, iron, manganese, copper, boron, molybdenum, nickel and chlorine.

The Law applies not just to nutrients but to light, temperature, water, disease, pests – anything that affects growth. The limiting input needs to be fixed before the others can boost growth to whatever the biological maximum might be in that environment. In irrigated agriculture, water is the most common limiting input.

So, it is complex. Really complex. But with computers and different techniques of analysis and just looking at nutrients, Crowley has been able to get a better handle on what could be limiting growth in an individual grove. This applies not to what is lacking, but what might be in excess – too much chloride, too much nitrogen, too much…………….

So, in the case of all this data collection the Crowley team has done, something unusual has popped up. Copper deficiency.

Copper deficiency is not commonly recognized as a problem in California avocado groves, but occasionally a grower will report a leaf analysis showing less copper than the 5ppm recommended by Embleton (http://ucavo.ucr.edu/General/LeafAnalysis.html). Typical copper deficiency was reported by Barnard and others (http://www.avocadosource.com/Journals/SAAGA/SAAGA_1991/SAAGA_1991_PG_67-71.pdf). They reported the symptoms of copper deficiency as follows: • Dull appearance of older leaves • Prominent leaf veination • Reddish-brown leaf color • Premature defoliation and twig. This is an extreme case, and Crowley is suggesting there may be some low, chronic level that limits avocado. His final report can be found at:

Of course, why copper might be limiting is another question. Is it due to root rot? Interaction with other applied materials like phosphorus (not phosphite, phosphorous, phosphonate) fertilizers? With irrigation management? Something(s) to think about.

And citrus in California is a different beast. It can commonly show copper deficiency and be a limiting nutrient. We apply copper as a frost/brown rot/septoria spray and as a result don't often see deficiency in citrus.

Liebig's Barrel. Optimum production occurs when all the barrel staves are as high as they can be. When one element is low, that becomes the limiting factor for production. Increased production doesn't occur until that uptake is improved and then the next limiting input restricts production. When that next one is corrected, then some other input then limits production. Correction keeps improving production until the biological limit is reached.

Have any readers actually seen a wooden barrel? 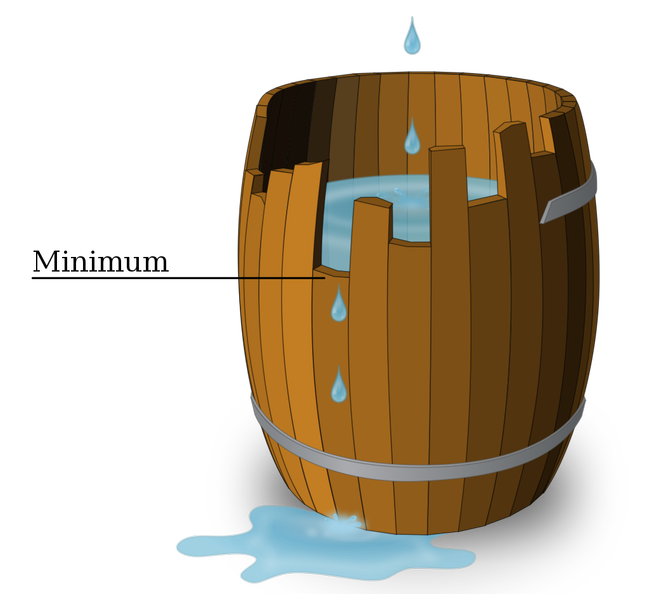 Tags: aeration (1), copper (3), fertilizer (18), interaction (1), iron (6), irrigation (91), leaf analysis (5), liebig (1), macronutrients (1), managenese (1), micronutrients (2), nutrients (24), soil analysis (1), tissue analysis (3), water (59), zinc (5)
Comments: 4
Comments:
by Greg Alder
on June 15, 2017 at 5:14 PM
I am curious whether micronutrient deficiencies show up on trees NOT given inorganic fertilizer. What I'm wondering is if a tree that lives in a soil where the micro-organisms are fed well with compost and/or wood-chip mulches, for example, will ever have these problems.
by Ben Faber
on June 15, 2017 at 5:31 PM
Greg
Yes micronutrient deficiencies can show up on orchards that use solely organic production methods. It's quite common to see iron deficiency. It's interesting that for years zinc deficiency was not seen in citrus grown in California when manures were regularly used as a fertilizer. When synthetic sources of nitrogen started to be used in the 50s, "little leaf" became more common and it was identified as a zinc deficiency. When manure was being used, zinc was applied as a constituent. When manure was stopped, zinc and the other nutrients in the manure were not longer applied. Any zinc was then found to be an essential element to citrus growth.
by Greg Alder
on June 15, 2017 at 9:18 PM
Thank you, Ben.
Is there a common correlation between iron deficiency in avocados or citrus and soil pH, or perhaps an excess of another specific nutrient?
by Ben Faber
on June 22, 2017 at 7:12 AM
Yep, Greg you are right in both cases. Soil pH controls availability of lots of nutrients, especially the micros like iron, zinc, copper, manganese. The nutrient may be there, but the plant cant get it. Taking the pH down to neutral or a bit lower like pH 6.5 can often relieve a deficiency. This is a better long term approach for correcting these deficiencies rather than applying a foliar or soil-applied iron or zinc. Knock the pH down and the deficiency goes away. Also these deficiencies can be induced by improper application of another nutrient. The classic is applying a phosphate fertilizer thinking there is a P deficiency and inducing an iron deficiency by precipitating available iron with the phosphate fertilizer. The unintended consequences of good actions.
Login to leave a comment.