Many people become panicked and reach for insecticidal sprays at the mere glimpse of a black and yellow striped insect without realizing that it may in fact not be a stinging wasp, but rather a harmless syrphid fly, a native bee, some other beneficial insect, or even a harmless wasp mimic.  There are said to be 18,000 wasp species in North America, and only a few of these cause problems to humans.

In my garden 2017 could be described as “The Year of the Wasp” with sightings of many different species, some in huge numbers, an event which encouraged me to do some research on the subject. Most wasps are beneficial since they live on a range of other insects, many of which we don't want in our gardens; aphids, caterpillars, grasshoppers and crickets, and spiders and even young cockroaches.

The downside is that they are capable of stinging to various degrees, and the worst species have extremely painful stings. However, there are many which are reluctant to sting, or whose sting is not particularly painful.

Vespid Wasps are social wasps sometimes known as paper wasps since they make nests of a papery material and the two species which occur most frequently in our area are yellow jackets and paper wasps.

Yellowjackets (Vespula ssp.) are social wasps, but queens overwinter alone, and then find a suitable sheltered nesting site in the spring. The nest begins as a ball-shaped cluster of cells covered in a smooth papery cover. As further generations develop they add to the nest, layer upon layer until it may reach 1 foot across. We are familiar with these black and yellow striped wasps ruining our picnics as they try to carry off scraps of food from our plates, or fall into a glass of beer or a can of soda (where they might not be noticed). They have a painful sting which for some people can be life-threatening, are intimidating at best, and can become quite aggressive. Last autumn there was a huge influx of yellow jackets in the Lake Tahoe region to the point where the coniferous forests were humming with them, and sitting or eating outside became impossible. So, beneficial as these are for their insect eating abilities their nuisance factor outweighs the good that they do, and if they decide to nest around your home or in high traffic areas it is wise to have them professionally exterminated. Paper Wasp Nest
Paper wasps (Poistes ssp.) have similar coloring and markings to yellowjackets but are slightly longer in the abdomen and have thinner waists and have orange antennae. (Yellow jacket have black antennae). These are the ones that construct nests of hexagonal cells; most often under the eaves of a roof or in a porch and these nests are used for one season and rarely get larger than a man's hand. When these wasps fly they tend to leave their legs dangling as they patrol various plants in search of insects. They can and do sting, but in general they go about their business quietly, catching aphids and tending their young. In my experience if left well alone they are not aggressive, and I have never been stung by one. Naturally if they have chosen to make a nest in a high traffic area or just outside the front door, or if you are planning to paint your house, these nests should be removed by a professional. We have always left the ones that have nested around our house until this summer when we discovered that they were eating our precious praying mantis babies as those were emerging. We knocked that wasp nest down after dark when they were not flying, but for days afterwards the wasps were flying around that area so we felt it best to avoid that spot until things had settled down. Thread Waisted Wasp
Common Thread-waisted wasps appeared in huge numbers this year, and when my thyme path was flowering it there were hundreds feeding on the flowers daily for several weeks. I don't remember seeing these particular wasps before. They are very thin, long-bodied wasps about 1” long with dark head and thorax and a black abdomen with a rusty-orange band around it. They were not at all aggressive and I walked on the stepping stones through this potential mine field on a regular basis and they never showed any interest in me. I actually ended up with one in my pant leg and it did not sting. These beauties are a gardener's friend since they capture caterpillars which they deposit in a tunnel in the ground, and then lay eggs on it. Their larvae feed on the caterpillar, thus destroying it. I wonder whether their large numbers were the result of the exceptional influx of striped sphynx moths that we saw in the Owens Valley earlier in the season. Female velvet ant. Photo: Laurie Christison, UC Davis equine control officer.
However, no good deed goes unpunished, and I recently saw a large female velvet ant in the garden. These are in fact wingless wasps (only the males have wings) and look like neither a wasp nor an ant to the uninitiated with their furry bodies which are often brightly colored although the one that I recently found was plain putty-colored. It pays to recognize them since they have one of the most painful stings known, which gives rise to their common name of “cow killers”. These wasps parasitize the larvae of the caterpillar-destroying wasps so I suspect that I shall see many more of them before the end of the season. The Mud Dauber wasps, as the name suggests, make nests out of mud. These may look like clumps of mud stuck on a wall, or occasionally like carefully constructed black organ pipes stuck together  in sheltered places such as garages or porches. The wasps provision their nests with spiders so are very definitely my friends! The wasps themselves are about an inch long and appear black overlaid with an electric blue color which is apparent in sunlight. Like many other solitary wasps they don't seem to be aggressive and only chose to sting if threatened. 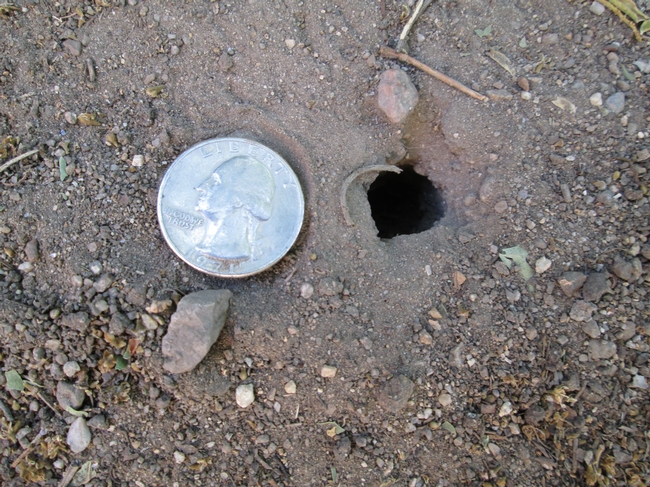 Hole of Ground-nesting Wasp.
Tags: Beneficial Insects (2), Insects and Other Pests Affecting Humans (5)
Comments: 1
Comments:
by Dustin Blakey
on July 19, 2017 at 11:03 AM
I was stung on my face by a paper wasp once in a chicken coop. It hurt enough that I was glad there were no 4-Hers around to hear me carry on. Wouldn't recommend testing their sting for science. I was surprised they got me since they usually leave folks alone. Nest was by the door, but I guess I was too close!
Login to leave a comment.