In the job listing for my position, weed identification and management were never explicitly mentioned. “Natural resource efforts” in the listing only mentioned water, forage, soils and “the wide array of issues” relating to rangeland ecosystem services. Of course, pests are an issue relating to rangeland ecosystem services (healthy water, soil, and air; biodiversity; etc.), but when I first joined UCCE, I did not expect to spend a large amount of time on weeds.

Now I know, a year and a half in, an incoming phone call is more likely to relate to weed management than to any other topic. Ranch visits for any purpose will usually include a discussion of weedy species on the property. While weed management is not the main priority for most of my clientele (predominantly cattle ranchers), it is a topic that arises as soon as they see an unfamiliar plant and weed control is often seen as an urgent issue. Weed identification and management are topics where I believe our clientele see us as reliable, capable and quick sources of information. While ranchers could seek out other resources, there is a good chance we can identify a weed and provide management options rapidly.

Below is a table of all the identifiable species (plus a catch-all) that I have encountered in client questions, via phone calls, samples brought to my office, and so on, and the number of independent mentions in the past 18 months. Keep in mind, this table does not include every weedy species that I have seen during this time frame. Rather, I focus on the species which clients specifically asked about or mentioned seeing on their property.

Some species are native while others are introduced; some are more invasive than others. Most of the identified species are forbs. For these landowners, a weed is generally something that isn't forage but occupies a significant portion of the land or is having a significant impact on their forage or other resources – whatever significant means to them. Significant impact can range from poisoning animals (yellow starthistle and fiddleneck can be especially harmful to horses) to damaging ranch water infrastructure (the impetus for the call about fig trees, which I addressed in my post last October). Impacts also depend on the primary livestock species on the property. Cattle generally prefer to eat grasses, which explains why so many more forbs than grasses have made it to the above table: there are far more cattle in my counties than there are sheep or goats, which prefer forbs and are often less sensitive to secondary compounds (often found in forbs and shrubs) which can be toxic to cattle and horses.

If you work in cropland or urban/residential areas, you may be surprised by what isn't in my table. Several urban and cropland plant pests are not considered weeds on the annual rangelands in Fresno and Madera Counties because they are good forage. For example, filaree/storksbill (Erodium cicutarium, E. botrys) and wild oats (Avena fatua, A. barbata) are key forage species that are perceived as weeds in other scenarios. Bur clover (Medicago polymorpha) can be a valuable high-protein forage, although it is less common than filaree and wild oats on the rangeland pastures I have visited.

What I find particularly interesting is the low frequency of questions about some of the more noxious weeds that I know are abundant in my counties of Fresno and Madera: namely, yellow starthistle. I wager that most folks are familiar with the plant, which explains why I don't get asked what it is. I am curious to know what efforts they have made to control yellow starthistle, because I have yet to receive a question on how to control it and yet it is widespread and well acknowledged. Maybe in the next 18 months I will get a better grasp on yellow starthistle management strategies; even if not, I plan to continue monitoring the species that are mentioned most. Looking back through my notes every year or so will help to identify weed management priorities.

Because of the diverse weeds on rangelands and the frequency of questions we receive, I am collaborating with livestock and natural resources advisor Julie Finzel (Kern, Kings, and Tulare Counties) to host a rangeland weed management workshop on Tuesday, May 1, at the Tulare County UCCE office. We hope to inform ranchers and rangeland managers of control and management options for the more common range weeds, demonstrate best practices of chemical weed control, and practice field identification of weeds at a nearby property. For more information on the workshop, please visit Julie's web page at http://cekern.ucanr.edu/Livestock/ or contact me at (559) 241-6564 or rkozeran@ucanr.edu.

*In conversations with landowners, they occasionally refer to certain species that I am unfamiliar with – at least, by the name they use. For example, several people have mentioned tarweed (which I originally assumed to be Holocarpha virgata) to me, and it was only much later that I discovered that they may have instead meant what I call fiddleneck (Amsinckia spp., especially A. lycopsoides – tarweed fiddleneck). From a distance, it can be hard to discern between the two species in a dense pasture, when all you can see are dark gray-green foliage and bright yellow flowers on short-leafed stems. It's even harder to distinguish between the two when a landowner has called asking how to get rid of “tarweed” without bringing you to their property. As a result, I genuinely do not know which species these landowners referred to in our conversations, and it may have resulted in less-than-optimal information passed from me to them. This has taught me two things. First, I will be more cautious about discussing plants if someone only provides their common name and ask for images whenever possible. And second, we apparently have some work to do in making sure that plant identification resources are both available to and used by our clientele, because I don't see a better way to encourage the use of standardized names.
For this table, I indicate the species as Amsinckia because it is the plant I have seen and personally identified, but one or more mentions of tarweed may indeed refer to Holocarpha. The photos below show examples of how Amsinckia can look in rangeland pastures; I took these photos at the San Joaquin Experimental Range in spring 2017. 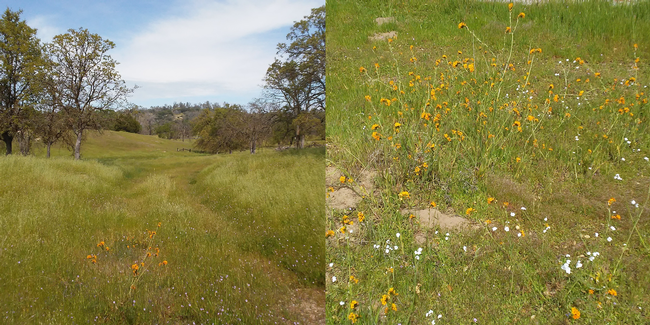