Entomology & Nematology News
sitenum=270
UC News about Entomology and Nematology.
It's All the Buzz: Saturday, May 5 Is Second Annual California Honey Festival
Published on: May 2, 2018 Hi, there! That's Benji Shade of Woodland Christian High School in the bee costume. (Photo by Kathy Keatley Garvey)
It's all the buzz.

The second annual California Honey Festival, sponsored by the UC Davis Honey and Pollination Center and the City of Woodland, will offer scores of entertainment and educational activities and food and drink from 10 a.m. to 5 p.m., Saturday, May 5 in downtown Woodland. It's a free, family friendly event.

The festival was created in 2017 to cultivate an interest in beekeeping, and to educate the public in support of bees and their keepers, said Amina Harris, director of the Honey and Pollination Center. "Bees face many threats today—it is the goal of the festival to help attendees understand the importance of bees to food diversity in the United States. "

The California Honey Festival's mission is to promote honey, honey bees and their products, and beekeeping. Through lectures and demonstrations, the crowd can learn about bees and how to keep them healthy.  Issues facing the bees include pests, pesticides, diseases, malnutrition, and climate changes.

One of the highlights: Extension apiculturist Elina Lastro Niño, California's state apiculturist, and a member of the UC Davis Department of Entomology and Nematology faculty, will be "opening a bee hive to show attendees just how a bee hive works," said Harris. "The intriguing catch? The hive will be full of bees!" Extension apiculturist Elina Lastro Niño will give two live bee demonstrations at this year's California Honey Festival.
Nino, working in a circular screened tent, will explain exactly how the beehive works. She will show the difference between the queen and the workers and drones, explain how bees draw out wax in the frames and store honey in the cells, talk about how the frames are placed within the hive to maximize the bees' efficiency, and answer questions. Her demonstrations are scheduled for 11:15, 1 p.m. and 3:45 in the bee tent, UC Davis Stage.

At the festival, the crowd can also learn what to plant in their gardens to feed the bees and other pollinators. Honey bees pollinate one-third of the American diet. Proceeds garnered at the festival will benefit bee and pollinator non-profit organizations involved in research and education.

Restaurants will offer creative and tasty honey centric menus throughout the week, officials said. Bars will offer a selection of mixed drinks with mead or honey and local breweries will include honey beers on tap.

The UC Davis Stage will be a beehive of activity. The schedule:

10:30 a.m.: Gene Brandi, past president of the American Beekeeping Federation, speaking on "Beekeeping and Honey Production in California"

11:45 a.m: James Sherman, chief operating officer of Pollinator.org, speaking on "Protecting Bees and All Pollinators at Home and on the Farm--What Can You Do?"

1:45 p.m. John Mola, winner of the 2018 Bee Symposium Graduate Student Poster Contest, speaking on"Where do Bees Go and How Do We Know?"

2:15 p..m.: World-class garden designer and author Kate Frey, speaking on "How to Design Bee-Friendly Gardens." She is the co-author the popular book, The Bee Friendly Garden, with Professor Gretchen LeBuhn of UC San Francisco

Honey? It's there in all the cooking demonstrations:

Entertainers will perform throughout the day.

The Gold Souls will offer driving grooves of funk, the rich textures of soul, and the compelling storytelling of the blues. Launched in early 2017, the band combines their many influences to create a unique sound. This effort came to fruition with the release and tour of their self-titled EP last May.

Over the last three years, City of Trees Brass Band has canvased Sacramento and San Francisco in an effort to deliver the spirit of New Orleans to the West Coast. Compiling 1,200 hours of street performance, dozens of educational clinics, and many inspirational assemblies for K-12th graders, the Brass Band takes pride in its contribution to Sacramento-area culture. In the ultimate test of brass and brawn, the Trees took a two-week trip to New Orleans where they said, "we discovered our sound not only holds up to the standards of the Crescent City, it belongs there."

1 to 2: The Sam Chance and the Untraditional

The Sam Chase and The Untraditional is described as "blending rock n 'roll and folk music while maintaining the sensibilities and attitudes from growing up on a healthy diet of punk rock." This band has performed at festivals such as Outside Lands, Hardly Strictly Bluegrass, High Sierra Music Festival, and Kate Wolf Music Festival.

This is a 7-piece, female-fronted, horn-heavy funk from Reno. They pride themselves on high energy and being "one of the funkiest live shows around." They have performed at tje Mateel Music Fest, Hangtown Halloween, For The Funk Of It, Squaw Valley Funk Fest, The Bounce, Ridgestock, Burning Man, Guitarfish, Enchanted Forest Gathering, Off Beat Music Fest-, Spookadelic Halloween Funktacular, Nugget Rib Cook Off, Hard Rock Hotel And Casino Lake Tahoe's Grand Opening, Sandpoint Summerfest, Concerts At Commons Beach,and Live at Lake View Tahoe, among others.

Live Music in the Beer Garden 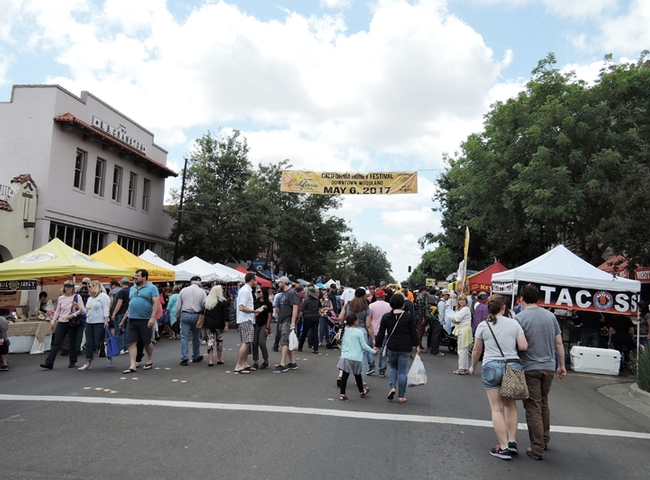 This was the scene at the inaugural California Honey Festival. The organizers expected a crowd of 3000, and were delighted when 20,000 showed up. (Photo by Kathy Keatley Garvey) 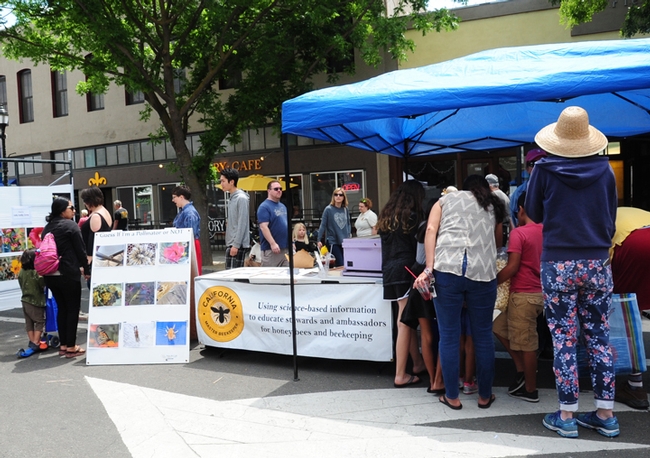 The California Master Beekeeper Program, operated by Extension apiculturist Elina Lastro Niño, staffed a table at the 2017 California Honey Festival and plans to do so on Saturday. (Photo by Kathy Keatley Garvey) 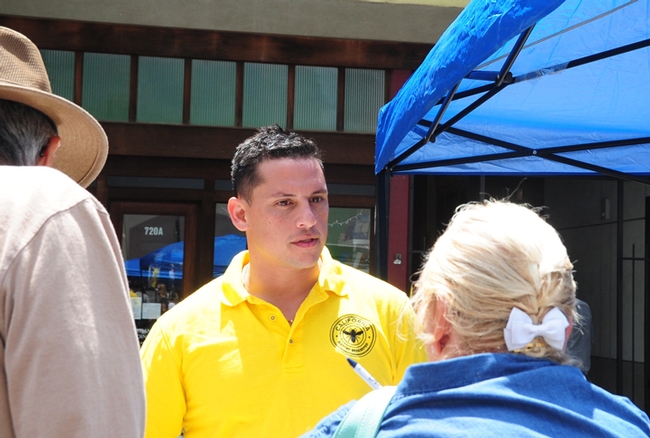 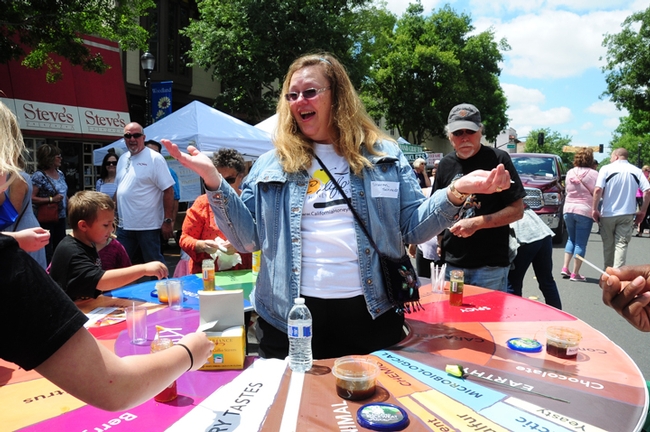 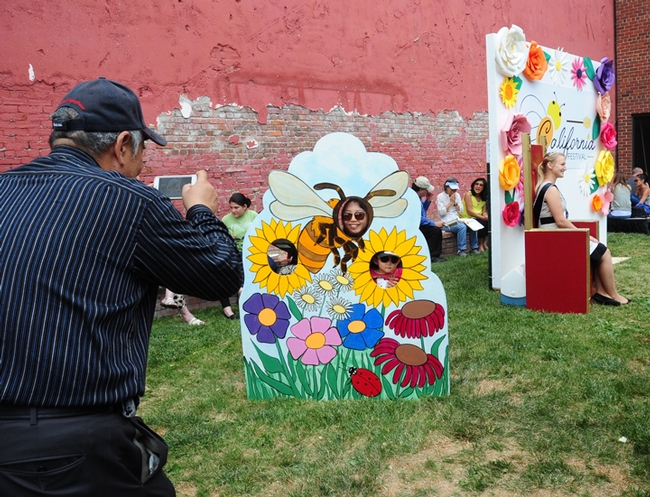