That's what we've been told for years. We hear that butterflies don't like the red ones, and that they may, in fact, be poisonous to them.

We've grown both in our pollinator garden in Vacaville, Calif.  Both flourished. However, we removed the red passionflower vine,  P. jamesonii, because the Gulf Frits avoided it.  They lay their eggs--and quite profusely, too--on our lavender passionflower (Passiflora incarnata), also called "Maypop." (In fact, every year they skeletonize them. Hungry, hungry caterpillars!)

We asked butterfly guru Art Shapiro, UC Davis distinguished professor of evolution and ecology, who has monitored butterfly populations in Central California for more than four decades and publishes his research and observations on his website.

"They don't use some of the red-flowered species," Shapiro says. "I don't know if they're actually poisonous. I've never found the bug on P. jamesonii around Ohlone Park in Berkeley, where there's tons of it. There's a large plant at the northwest corner of 3rd and B in Davis that may be this species, and they don't use it, either."

P. jamesoni, also known as "Coral Seas," (one of some 500 varieties in the world, see Wikipedia for the full list) is indeed striking with its brilliant red flowers.

"Passiflora jamesonii is endemic to the Ecuadorean Andes, where it is known from five subpopulations on both sides of the range. Only one subpopulation is inside Ecuador's protected areas network. The species seems to prefer untouched areas, so fires are a severe threat," according to the IUCN Red List. 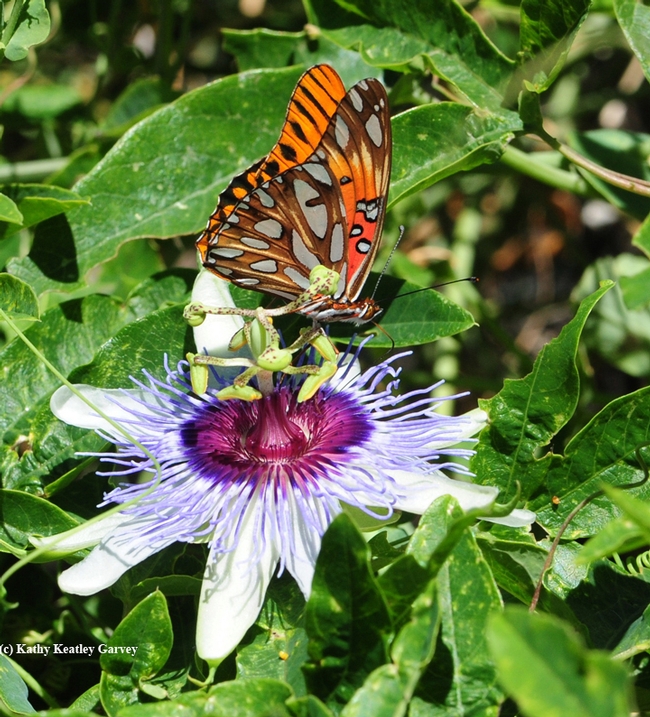 A Gulf Fritillary foraging on a lavender passionflower vine, genus Passiflora. This is the Gulf Frits' host plant, they lay their eggs only on Passiflora. (Photo by Kathy Keatley Garvey) 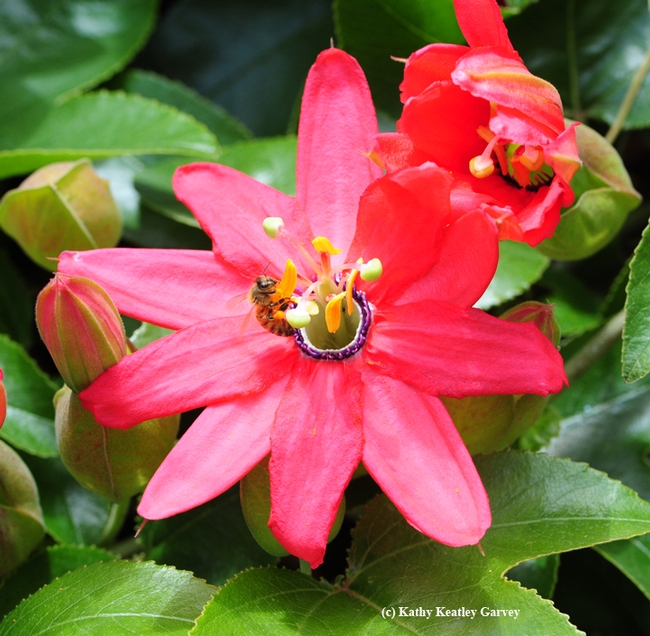 Gulf Fritillaries avoided this species of red passsionflower vine, Passiflora jamesonii, planted in the Garvey yard. Honey bees, however, did not. (Photo by Kathy Keatley Garvey)
Focus Areas:
Focus Area Tags: Environment, Yard & Garden
Tags: Agraulis vanillae (73), Art Shapiro (217), butterflies (74), Gulf Fritillary (53), Passiflora (41), Passionflower vine (40), UC Davis Department of Evolution and Ecology (33)
Comments: 2
Comments:
by Tina Saravia
on October 5, 2018 at 10:14 PM
I have a Passiflora edulis “Frederick” that’s producing fruit for the time. I have not noticed any butterflies and there are no holes on the leaves, but obviously the flowers are getting pollinated.
by Linda Pottberg
on August 16, 2020 at 2:12 PM
Zebra Longwings seem to enjoy my red passionflower vines. They have already flowered and fruited prior to me bringing them onto my property. Good to know about the honey bees. We have 30 acres with lots of host plants for Gulf Fritillaries...including fields of wild native passionflower vines and Lantana. Glad to know I plant the red passionflower vines now. Thanks for the info.
Leave a Reply: