We celebrate honey bees every day, but they are especially celebrated on May 20, World Bee Day. It's an annual day to raise awareness about the importance of bees and beekeeping. It's a day to acknowledge the industriousness of Apis mellifera,  their role in our lives, and their place in our ecosystem. Bees pollinate a third of the food we eat.

A bit of history: The United Nations approved Slovenia's proposal to proclaim May 20 as World Bee Day in December of 2017. Slovenia also sought to pay tribute to noted beekeeper and native son Anton Janša (1734-1773) of Carniola (now Slovenia), a pioneer of modern apiculture, a noted painter, and an apiculture teacher at the Habsburg Court in Vienna.

Janša became a full-time beekeeper in 1769. He began by tending his father's 100 hives, but a year later, he received a royal appointment as Austria's teacher of apiculture. He kept bees in the imperial gardens (Augarten) and traveled the country, eager to present information about his beloved bees.

Janša "became famous for his lectures in which he demonstrated his knowledge of bees," according to Wikipedia. "He also wrote two books in German: Discussion on Beekeeping and A Full Guide to Beekeeping. The latter was published in 1775, after his death. In Full Guide, Janša noted: Bees are a type of fly, hardworking, created by God to provide man with all needed honey and wax. Amongst all God's beings there are none so hard working and useful to man with so little attention needed for its keep as the bee." Andy Xu examines a bee he caught in a catch-and-release activity in the Häagen-Dazs Honey Bee Haven. (Photo by Kathy Keatley Garvey)
Janša is known for "changing the size and shape of hives to a form where they can be stacked together like blocks," according to Wikipedia. "As a painter, he also decorated the fronts of hives with paintings." Slovenia beekeepers preserved his Janša Beehive and also erected a plaque at his home.  A Yugoslavian stamp (1973) bears his portrait.

A tip of the veil to Anton Janša!

More locally, the Häagen-Dazs Honey Bee Haven, part of the UC Davis Department of Entomology and Nematology, celebrated bees during the "Take Our Daughters and Sons to Work" Day. UC Davis employees and their offspring visited the half-acre garden on Bee Biology Road, admiring the flowers and the six-foot-long bee sculpture, Miss Bee Haven, that anchors the garden. The ceramic-mosaic sculpture is the work of Donna Billick of Davis, a self-described "rock artist."

Anton Janša would have felt right at home!

Among the bee haven visitors that day were two beekeepers: elementary school student Adelaide Grandia of Woodland and her grandfather Dwight Grandia of Gulf Shores, Alabama, who has kept bees for 39 years. "I've had hives in the Atlanta area for 25 years and in northern Alabama for 10 years," he said. "I'm teaching my granddaughter beekeeping." He recently set up a bee hive for her.

"My grandpa is a beekeeper," Adelaide said, "and a pilot." Her mother, UC Davis Professor Liza Grandia of Native American Studies, is also interested in bees.

UC Davis staff employee Xu Chunying and son, Andy, delighted in the catch-and-release activity, in which youths catch bees in a vacuumlike tube device, examine them, and then release them. Honey bees, native bees and carpenter bees are favorite subjects.

Ariel Cormier, who works in the Office of the Chancellor and Provost as manager of Budget and Financial Analysis, attended with her eight-year-old twin daughters Casey and Gabrielle.  They delighted in the bees, blossoms, and  the beautiful day.

The Häagen-Dazs Honey Bee Haven, located next to the Harry H. Laidlaw Jr. Honey Bee Research Facility, is open to the public from dawn to dusk. Admission is free. Group tours are also available for a small charge. For more information, access the website. 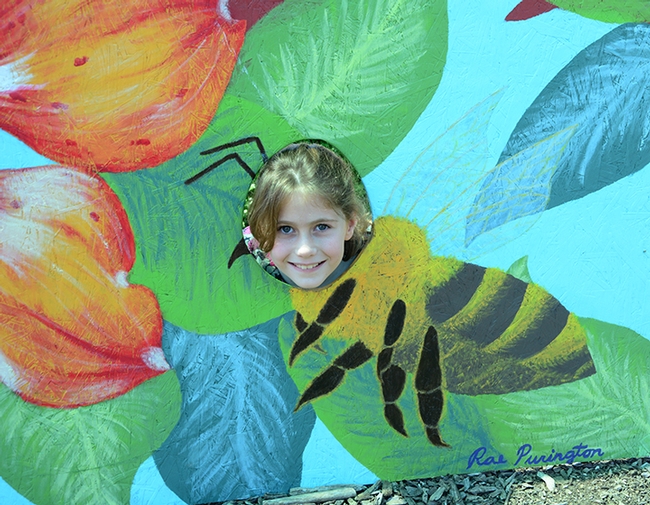 Beekeeper Adelaide Grandia smiles through a pollinator cut-out board. Her grandfather is teaching her beekeeping. (Photo by Kathy Keatley Garvey) 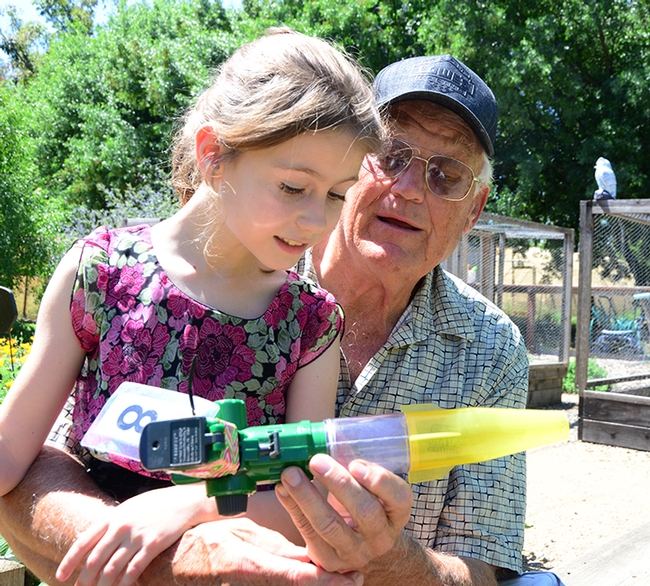 Adelaide Grandia and her grandfather, Dwight Grandia of Gulf Shores, Ala., confer on a bee vacuum device. He is teaching her how to keep bees and recently set up a hive for her. (Photo by Kathy Keatley Garvey) 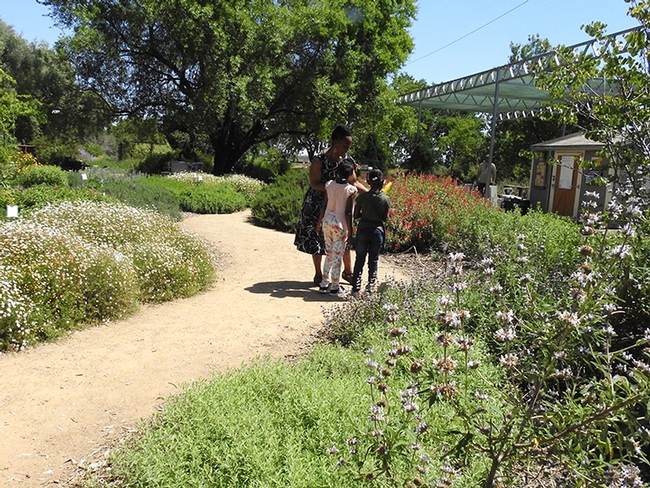 Ariel Cormier, who works in the chancellor and provost offices as manager of Budget and Financial Analyis, guides her twin daughters Casey and Gabrielle, 8, in the Häagen-Dazs Honey Bee Haven. The garden, located on Bee Biology Road, was installed in the fall of 2009. (Photo by Kathy Keatley Garvey) 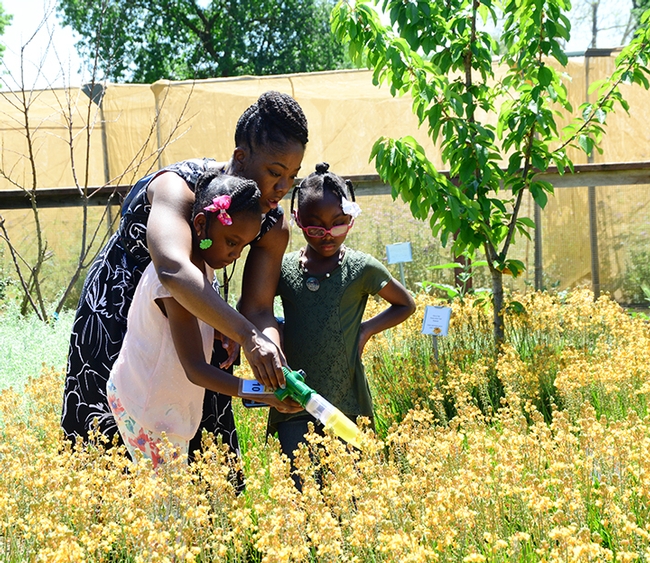 Ariel Cormier shows her daughter, Gabrielle, how to use the bee vacuum device, a catch-and-release activity. At right is daughter Casey. The 8-year-old girls are twins. (Photo by Kathy Keatley Garvey) 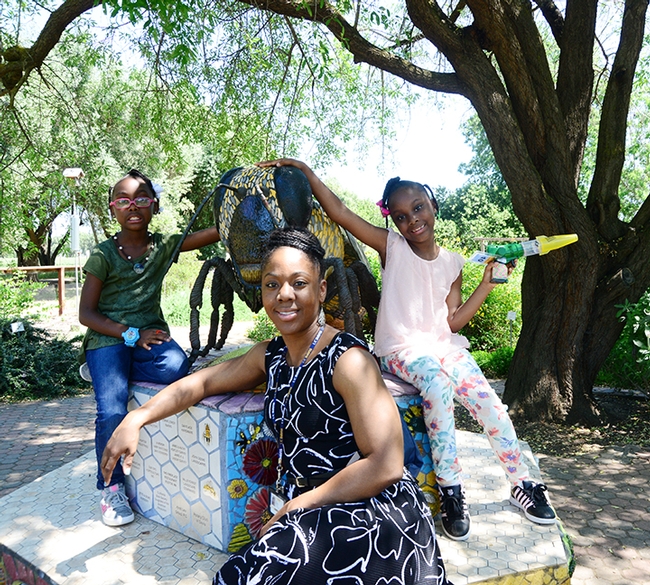 Ariel Cormier with eight-year-old twin daughters Casey (left) and Gabrielle at the Miss Bee Haven sculpture. It's a six-foot-long mosaic and ceramic sculpture of a worker bee. (Photo by Kathy Keatley Garvey) 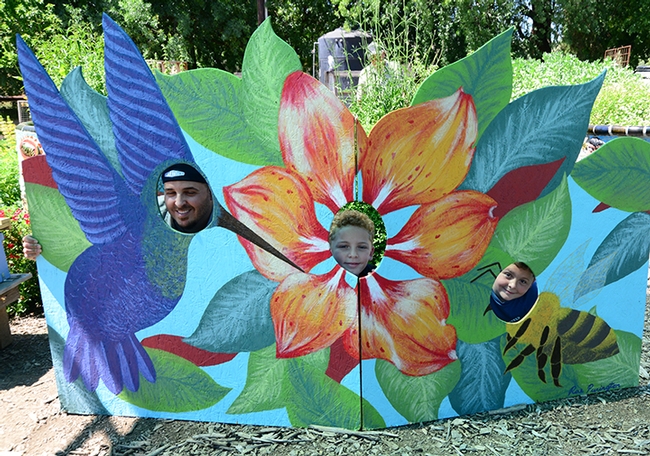 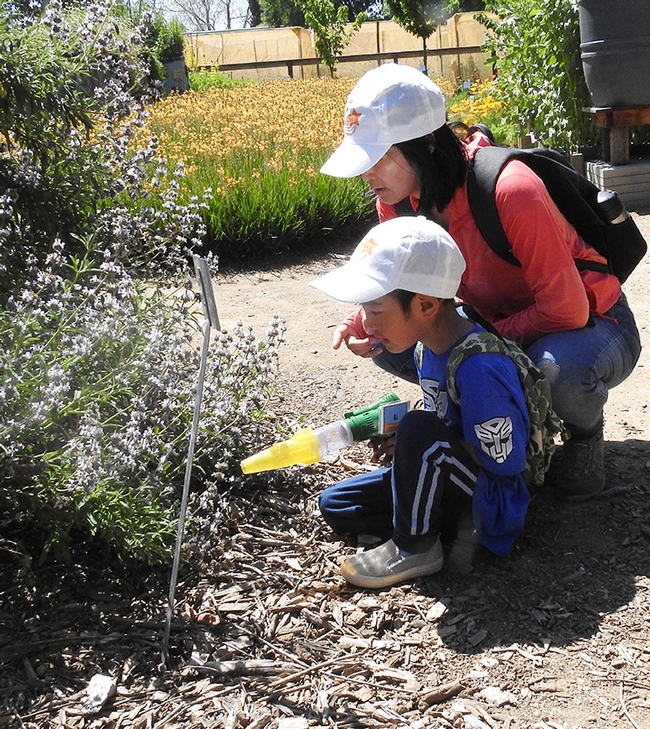