Bug Squad
sitenum=63
Happenings in the insect world
Where Are You, Gulf Fritillaries?

Where are you, Gulf Fritillaries?

The Gulf Fritillary (Agraulis vanillae) population seems to be diminishing this year around Solano and Yolo counties.

A few here, a few there, but not in the large numbers of last year.

Last summer the Gulf Frits overwhelmed our passionflower vine (Passiflora), their host plant, and skeletonized it.

Which is what we want them to do. We plant Passiflora for them, not for the fruit or the blossoms.  On a good year, they eat it all--blossoms, fruit, leaves and stems--and look for more.

The history of the butterfly in California is as striking as its silver-spangled, reddish-orange coloring.

“It first appeared in California in the vicinity of San Diego in the 1870s,” says noted butterfly expert Art Shapiro, distinguished professor of evolution and ecology at the University of California, Davis. “It spread through Southern California in urban settings and was first recorded in the Bay Area about 1908. It became a persistent breeding resident in the East and South Bay in the 1950s and has been there since.”

Shapiro, who has monitored butterflies in central California since 1972 and maintains a research website at http://butterfly.ucdavis.edu,  says the Gulf Frit “apparently bred in the Sacramento area and possibly in Davis in the 1960s, becoming extinct in the early 1970s, then recolonizing again throughout the area since 2000.”

It's making a comeback, but this year it doesn't seem to be "coming back" so much.

Want to attract the Gulf Frit? Plant its host plant and some of its favorite nectar plants. In our pollinator garden in Vacaville, their favorite nectar sources include the butterfly bush (Buddleia), Mexican sunflower (Tithonia) and lantana (genus Lantana.)

Plant them and they will come--if they're around! 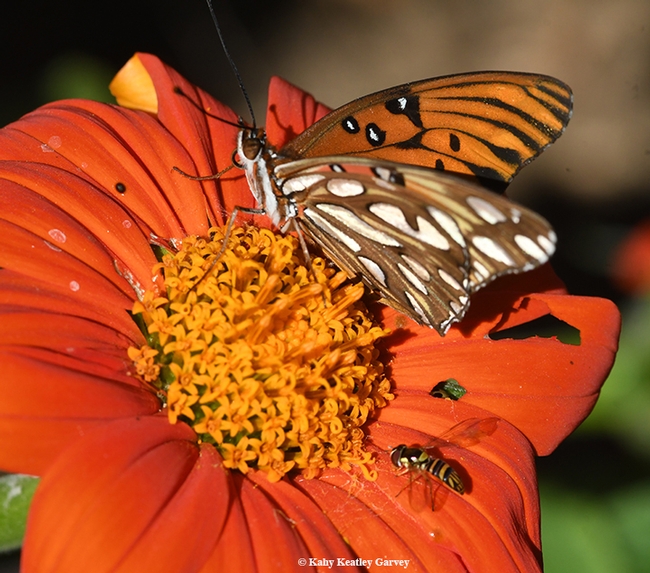 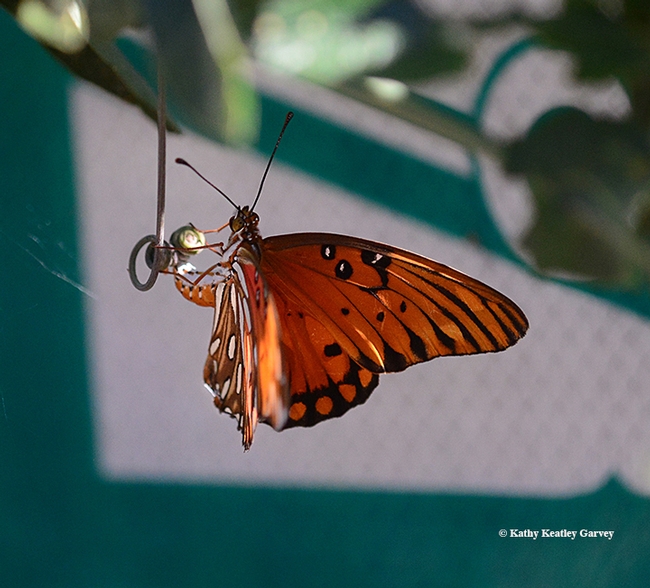 A Gulf Fritillary laying an egg on the tendril of a passionflower vine (Passiflora). (Photo by Kathy Keatley Garvey) 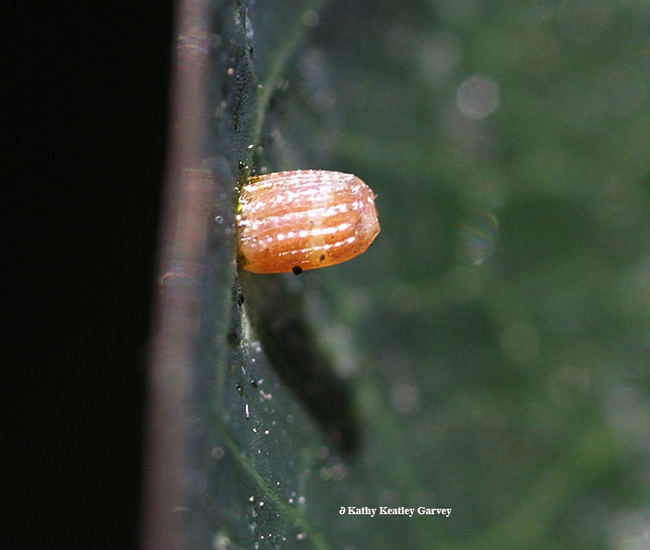 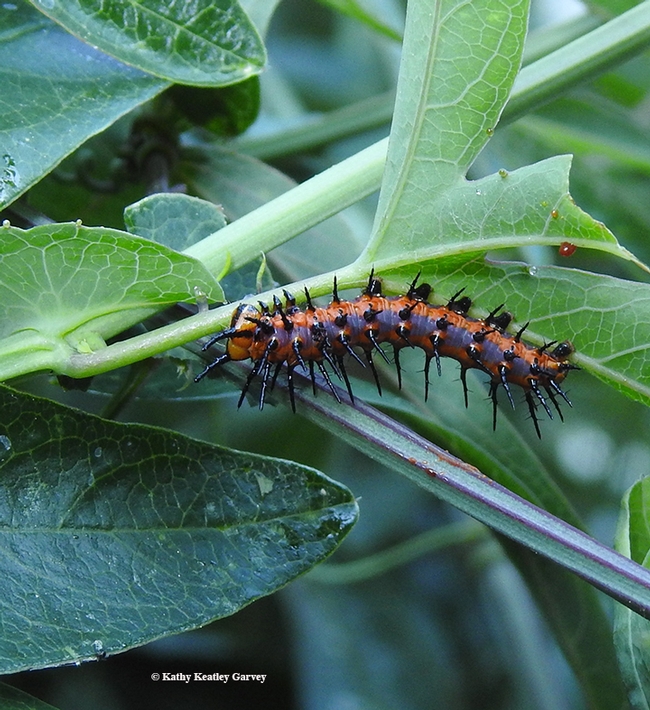 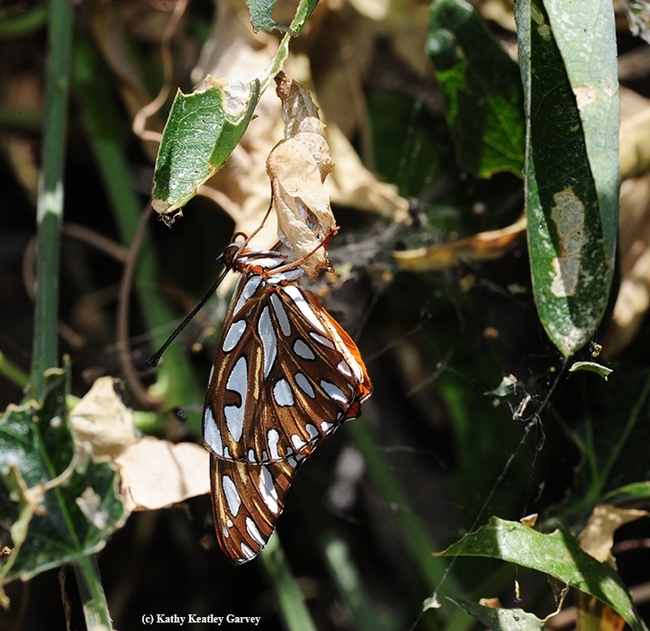 A newly eclosed Gulf Fritillary and its chrysalis. (Photo by Kathy Keatley Garvey) 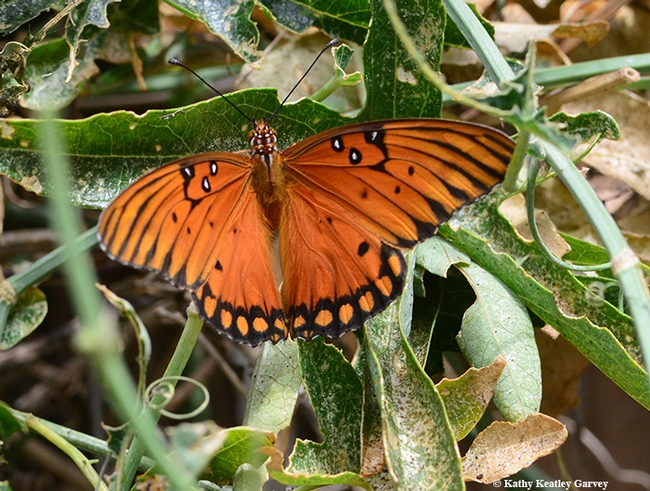 A Gulf Fritillary spreads its wings on Passiflora. (Photo by Kathy Keatley Garvey)
Focus Areas:
Focus Area Tags: Agriculture, Economic Development, Environment, Innovation, Natural Resources, Yard & Garden
Tags: Agraulis vanillae (81), Art Shapiro (261), Buddleia (4), butterflies (86), Gulf Fritillary (62), Lantana (9), Passiflora (45), passionflower vine (46), Tithonia (60), UC Davis Department of Evolution and Ecology (36)
Comments: 8
Comments:
by Suzanne Clarke
on June 29, 2019 at 10:51 AM
The same with me in Petaluma -- many fewer than last year. But I harvest the eggs I've found immediately and bring them inside to metamorphose and then put them back outside. Then they come back and eggs on my Passionvine.
by Milli Wright
on June 29, 2019 at 2:52 PM
I do have Gulf Fritillaries on my Passionvine. Not as many as last year or year before but there are at least 4 at any time in the area: Vine growing on my lath house in a quiet / not disturbed area. Don't see any larva this year.

I've been seeing yiger swallowtail butterflies for a few months now at least 2-4 each day. Found 3 full size larva about 3 weeks ago-on a large bronze fennel. Have not seen their chrysalis. Today I saw one adult flutter up out of area -- hoping it was one of my larva emerging.
by Virginia E Berglund
on July 3, 2019 at 2:30 AM
Wanted to tell you not to worry... that I've got a ton of Gulf Frits, here in Pasadena, and the Passiflora to keep them munching without decimating the vines. But when I compare pictures with yours, it appears I've misidentified them? Size is right, but more white spots at the tips and some checkerboard at the edges.

I've got a 12x12 metal sun shade (no canvas...all vines, but definitely a tent now). This butterfly bower "blooms" butterflies on almost any warm sunny day all year long. There's a volunteer apricot totally covered with another Passiflora, including 25' of adjacent fencing. That vine is engulfing a nearby "tuna cactus" as well.

We (in the neighborhood) have also seen more Monarchs than in any years past. There's more native (and non native) milkweed growing now. At my place, they are sipping on an edible "Taiwanese spinach" type vine (on another arbor) with saffron yellow tiny dandelion-like blossoms that dry into teensy tutus.

This type of landscape is fast disappearing. We are told we need "fire margins" now. Passiflora is not a plant for "managed city properties", and yes, is invasive. There's no good time to trim or tear it down without destroying the butterflies in various stages. There is also a massive white mulberry tree, likely from the silk worm bust at the turn of the century....and I keep that for the birds.

Guess my place will just burn. Love your blog and pics and people! Many thanks,
Ginger
by DR
on July 17, 2019 at 11:58 AM
I have NO Gulf Eritillaries in San Dimas. Most years I have many dozens, even hundreds. No caterpillars, no adults. At least we have a robust monarch population this year! Last year seemed to have an explosion of parasitic wasps... maybe that has affected this year’s butterflies.
by Dar Ferguson
on July 20, 2019 at 2:52 PM
Hello! I photographed a male and female today on our butterflybush in Chico, Ca. 7/20/2019.
by Richard E OBrien
on September 2, 2019 at 5:56 PM
I usually have a lot here in Houston, Texas every year on my passion vine but almost none this year. I also have a lot fewer pipevine swallowtails. I hope this is just a normal cycle.
by Wendy
on November 6, 2021 at 11:27 AM
My son found a gulf fritillary caterpillar yesterday. We are in the Suisun Area by Travis Air Force Base. I'm surprised to see one still in caterpillar stage in November. Hoping the little guy doesn't get too cold.
by No name
on June 28, 2022 at 4:20 PM
I found two tiny caterpillars today that I found on my purple passion flower vines. They are eating quite a lot since I brought them in and put them in an old terrarium of mine, but I haven’t found any more. Last year at the same time I found around 8
Leave a Reply: