Many new hybrids of stone fruits have been appearing in catalogs and on supermarket shelves in recent years resulting in a plethora of new terms many of which are defined below. Apricot, Used as a parent of many new hybrids

The most common hybrids are those between apricots (Prunus armeniaca) and Japanese plums (Prunus salicina) or cherry plums (P. cerasifera) and are known as interspecific plums. First generation crosses are known as plumcots, a name coined by Luther Burbank, or apriplums usually based on which they more closely resemble.

Beyond these first generation crosses further hybridization has taken place resulting in a plethora of modern hybrids containing differing percentages of the original parents and resulting in certain characteristics of either of the original fruits being dominant, but with distinct benefits such as increased hardiness, less acidity, higher sugar content, or with firmer flesh making for more marketable features.

While Luther Burbank experimented with early hybridization of plums and apricots, we have Floyd Zaiger, a family fruit farmer and a truly remarkable hybridizer in Modesto, California to thank for most of these newer, interesting hybrids. He has devoted his life to painstakingly hybridizing stone fruits by hand pollination, creating hundreds of new varieties. Out of all the hundreds of crosses that he grows each year only a very select few go forward to further trials to become new named varieties. Selections of these are now marketed by Dave Wilson Nursery. See links below.

Pluots are characterized by a smooth plum-like skin and a complex flavor where the plum dominates."Pluots" were created in the 20th century by Floyd Zaiger.

In Apriums the apricot dominates both in the external appearance of the fruit and the flavor and texture. Like apricots they tend to be early ripening, but are generally firmer and have a rosy glow overlaying the orange skin. Like pluot, aprium is also a trademark of Zaiger's.

Color-cot interspecific apricots are complex hybrids between apricots and plums where the apricot dominates.

Nectaplum is a cross between a nectarine and a plum. There is only one well known variety of this “Spice Zee” which has the appearance of a nectarine with very intensely flavored, sweet, white flesh.

Peacotum is a peach/apricot/plum hybrid. The current offering in this class, 'Bella Gold' is a home garden cultivar, whose main parent is apricot. There is another interspecific cross that is more peach-like: Tri-Lite, but it lacks apricot in the cross.

Pluerry is a hybrid between a cherry and a plum.

There are now hundreds of varieties of interspecific crosses with names like 'Dinosaur Egg', 'Flavor Queen', 'Splash', 'Dapple Dandy', but sadly, in supermarkets they are often just labeled as plums or apricots which is not very helpful for taste testing.

Growing interspecific hybrids. Some of these hybrids are now available in catalogs or from specialist growers, but a word of warning: look very carefully to see which specific varieties will pollinate each other and make sure that you choose those which are compatible otherwise you may end up with a tree which grows well, flowers well but has no fruit set! This does of course mean that you will in all likelihood end up with two trees, so make sure that you have enough space for them. Many of these crosses have low chilling requirements and flower too early for Owens Valley. (See this link for chill values.) If you're not in Wilkerson, you'll probably have frequent crop loss. Do your homework. 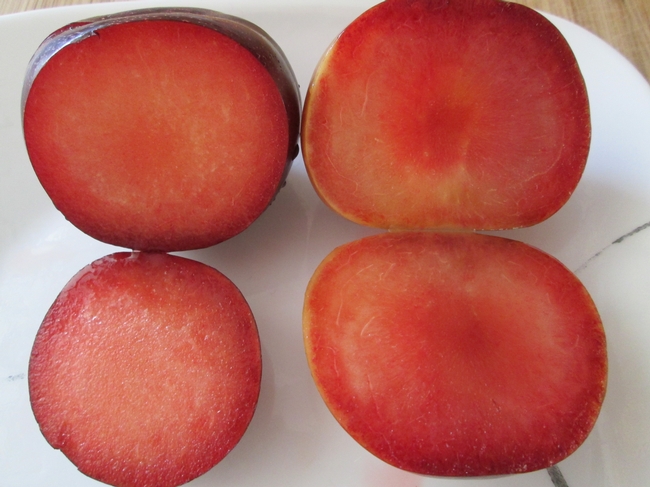