So tiny! Jasmine Morisseau, 10, checks out the male praying mantis, a Stagmomantis limbata, at the Bruce Hammock Lab Water Balloon Battle. (Photo by Kathy Keatley Garvey)
He wasn't invited, but he crashed the party anyway.

A few minutes before the 16th annual Bruce Hammock Lab Water Balloon Battle began on the Briggs Hall lawn at the  University of California, Davis, water warrior Jasmine Morriseau, 10, noticed "something" on the head of her twin brother, Cedric.

Could it be? It was. An immature praying mantis.

Specifically, a male Stagmomantis limbata, as identified by praying mantis expert Lohitashwa “Lohit” Garikipati. “I'd guess 5th instar by the size of the wingpads,” said Garikipati, a Bohart Museum of Entomology associate who just recently received his bachelor's degree in entomology.

The twins showed the insect, also known as a bordered mantis, to their older sister Evelyne, 15, and to their father Christophe Morisseau, a research scientist in the Hammock lab who coordinates the annual water balloon battles.

And then Jasmine gingerly placed the praying mantis on a nearby bush, out of the line of fire and out of the 96-degree heat. Lea Barnych, 4, whose mother Natalia Vasylieva is a researcher in the Bruce Hammock lab, takes aim, while French visiting student Valentin Nony (behind her) reacts. (Photo by Kathy Keatley Garvey)
Then, and only then, did the battle begin.

The annual battle, aka “Bruce's Big Balloon Battle at Briggs,” is the brainchild of Bruce Hammock, a distinguished professor who holds a joint appointment with the UC Davis Department of Entomology and Nematology and the UC Davis Comprehensive Cancer Center. It's a way of showing  camaraderie and engaging in a little fun. They fill and toss 2000 water balloons, and then empty tubs of water on unsuspecting lab mates.

Sometimes other labs join in the fun, as did the scientists this year and last year in the Aldrin Gomes lab, UC Davis Department of Neurobiology, Physiology and Behavior.

The water warriors are so skilled that the battle usually lasts about 15 minutes—15 minutes of aim. Then they remove all the balloon remnants from the lawn, pose for their annual group photo, and head back to work.

“We work hard and play hard,” said Hammock, a member of the UC Davis faculty since 1980 and the director of the National Institute of Environmental Health Sciences (NIEHS)-UC Davis Superfund Research Program. Trained in chemistry, toxicology, biochemistry and entomology, he now targets chronic pain in humans and companion animals. For the past 20 years, the Hammock lab has been researching an inhibitor to an enzyme, epoxide hydrolase, which regulates epoxy fatty acids.  “My research led to the discovery that many regulatory molecules are controlled as much by degradation and biosynthesis," Hammock said. "The epoxy fatty acids control blood pressure, fibrosis, immunity, tissue growth, depression, pain and inflammation to name a few processes.”

Hammock co-founded EicOsis LLC, a Davis-based company that recently received a $5 million investment from Open Philanthropy to move original research developed in the Hammock lab into human clinical trials. (See news story.) Nationally recognized for his scientific achievements, he is a fellow of the National Academy of Inventors, which honors academic invention and encourages translations of inventions to benefit society.

The Hammock lab also knows how to translate science into watery fun on a hot summer day. 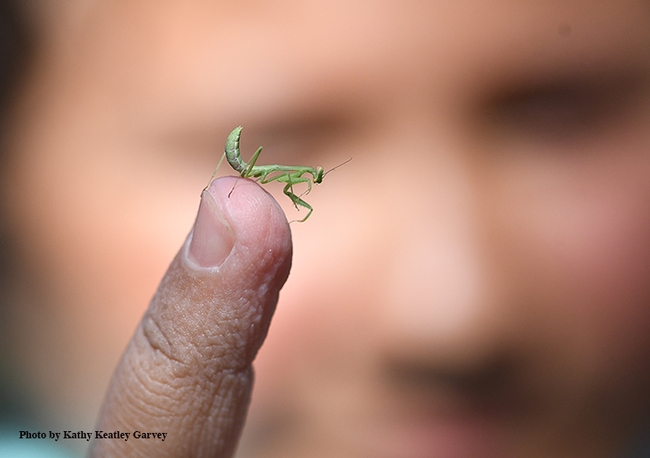 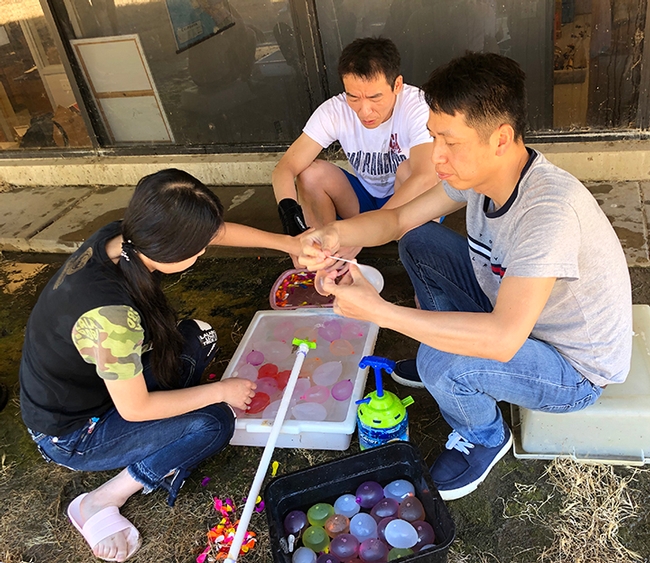 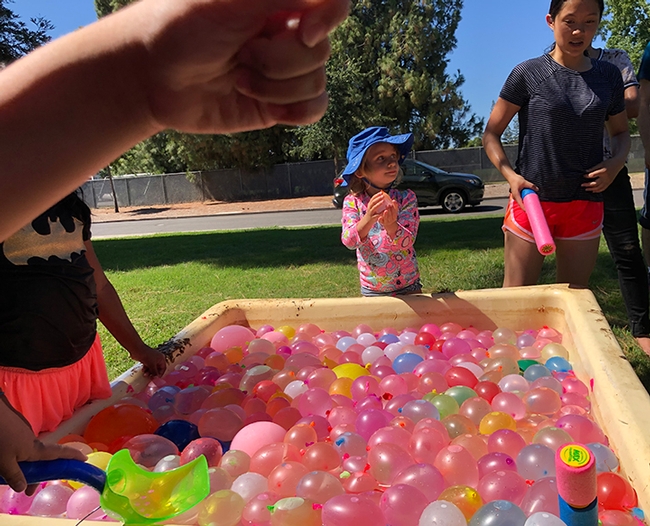 Some 2000 colorful water balloons are ready to be tossed. In the background is water warrior Lea Barnych, 4, whose mother Natalia Vasylieva is a researcher in the Bruce Hammock lab. (Photo by Kathy Keatley Garvey) 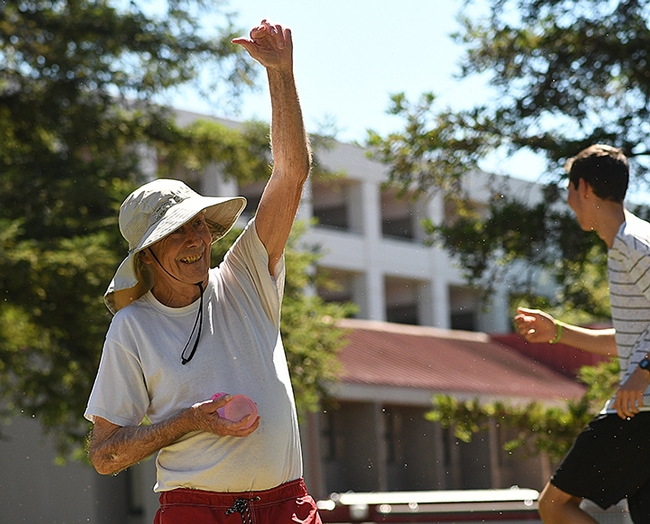 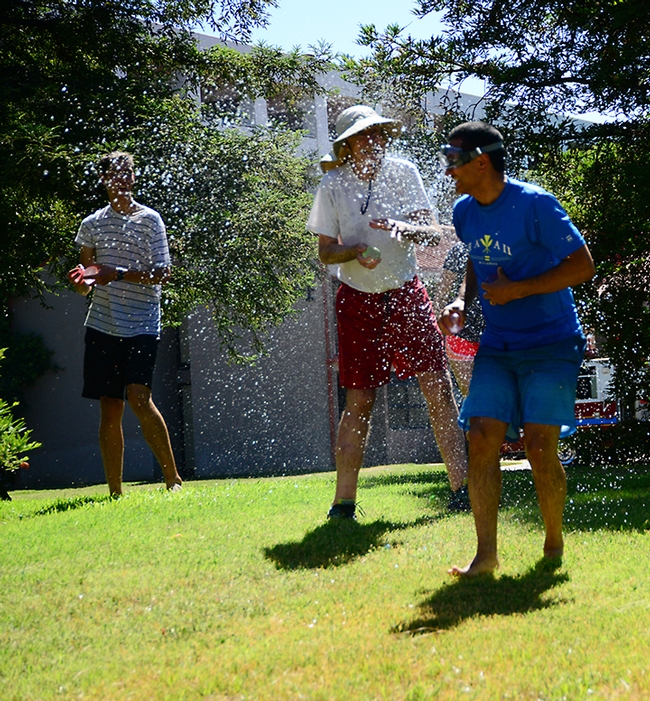 Splash! It was an international soakfest at the Bruce Hammock Lab Water Balloon Battle, with eight countries represented. That's Hammock in the center getting sprayed. (Photo by Kathy Keatley Garvey) 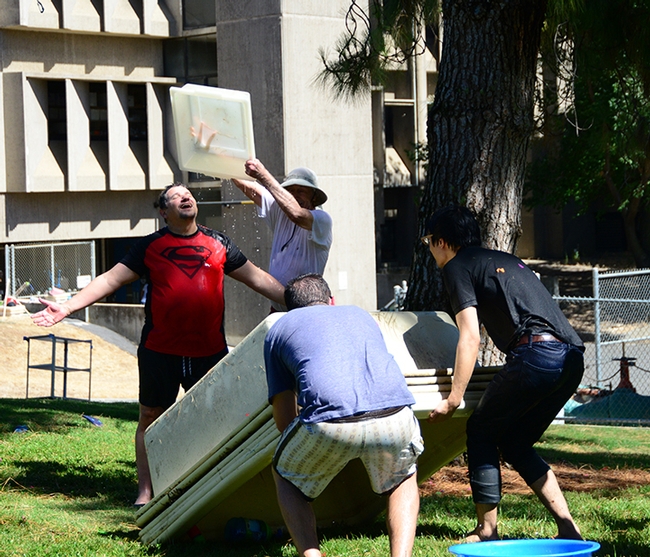 Christophe Morisseau, a researcher in the Hammock lab and coordinator of the Bruce Hammock Lab Water Balloon Battle, gets drenched. (Photo by Kathy Keatley Garvey) 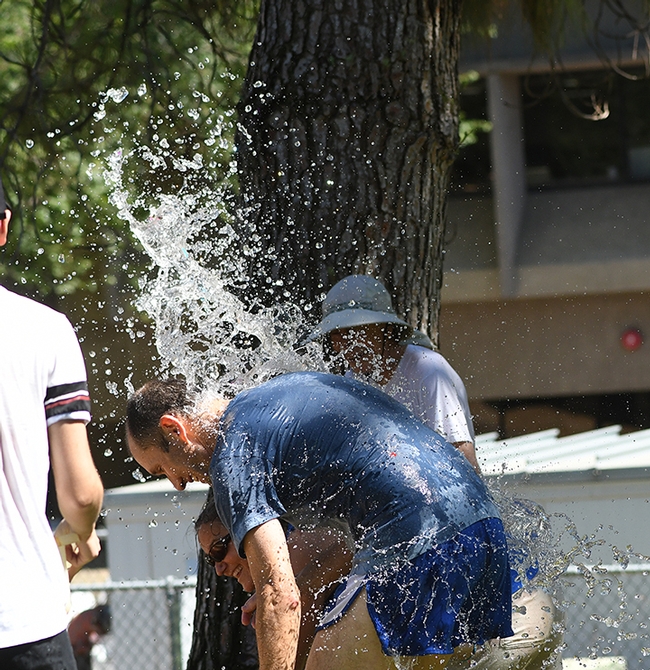 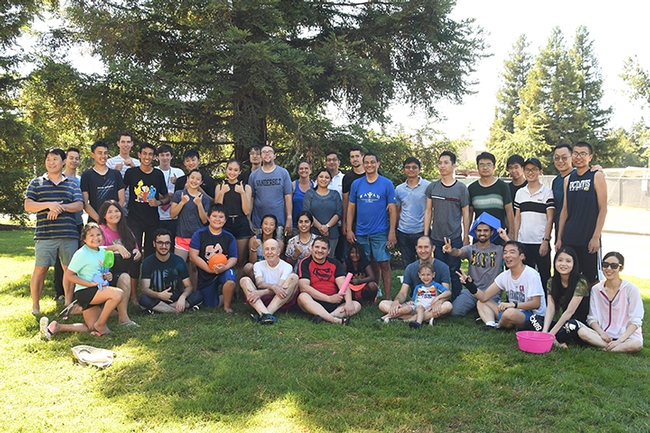