Cinderella has quite a selection of pumpkin coaches in my yard right now.  The pumpkin, ‘Rouge vif d'Etampes,' is also known as the ‘Cinderella' pumpkin because it is believed that artists used the pumpkin as the model for Cinderella's fairy tale coach.  This heirloom pumpkin with beautiful deep orange-red skin, relatively deep lobes, and a flattened top.  It was the most popular pumpkin in Parisian markets in the 1880s and was introduced by Burpee to U.S. gardeners in 1883.  The fruit can reach up to 12-18 inches tall and 15-20 pounds, but matures at smaller sizes, too.  It can be grown as an ornamental pumpkin or used for cooking, such as pies, baking, and soups.  It stores well.

For some reason, the ‘Cinderella' pumpkin is the one pumpkin I can grow consistently.  My yard is small so I've mostly tried to grow the mini or baby pumpkins, without much success.  Each year, however, I've managed to harvest at least one ‘Cinderella' pumpkin.  One pumpkin may not sound like much, but it is always a gorgeous pumpkin, so it makes me happy!

This year was different.  I don't plant in rows or mounds, but I did make an effort to amend the soil more when we planted.  We are using an irrigation system that adjusts the watering based on weather conditions so the pumpkins may be getting more water, or water at more appropriate times, than in the past.  Maybe they liked the weather better.  Something changed.

I carefully planted the seeds in the prepared planting sites but had a few seeds left over.  “I'll just sprinkle them around the yard and see what happens,” I thought.  “They probably won't grow.”

A full quarter of my yard now is covered in pumpkin vines.  At their peak, they grew a foot a day!  The vines have rampaged across my bedding plants, smothering salvia, yarrow, and kangaroo paw, (but I drew the line at letting them take over my dahlias).  Apparently inspired by my neighbor's vigorous wisteria, the vines attempted to climb up our 6-foot fence, making it nearly 4 feet high before the fruit made it too heavy to climb anymore.  They have surrounded my apple espalier, climbed it, and tried to hide within it (until a bright orange pumpkin gave it away).  They busted out of the raised vegetable beds, snuck between the bed and fence (which makes for a slightly rectangular pumpkin), and fraternized amongst the cherry tomatoes.  I've had to create pumpkin supports (usually large pots) for the vines that climbed and then set fruit so that the pumpkins don't tear off the vine.  Each day, we walk cautiously around the yard, jumping over vines, looking for stray pumpkins, all while with the unsettling feeling that a vine could grab an ankle at any moment.  Even the big dog is wary.  We talked about trying to control the vines or removing some, but honestly, it has been entertaining to see what will happen next!

The mini and baby pumpkins planted in the same conditions?  I didn't get a single one.

You can easily find Rouge Vif d'Etampes or ‘Cinderella' pumpkin seeds from a number of seed companies.  The pumpkins should be planted in rich, well-drained soil in full sun (ideally at least 6 hours a day) when temperatures are warm.  Night temperatures should stay above 50°F.  The pumpkins mature approximately 95-120 days from planting.

Follow the planting instructions on the seed packet, but in general, sow the seeds 1 inch deep.  For better drainage, sow the seeds in groups of 3-6 in mounds or hills with each group 3-6 feet apart.  Thin the seedlings to 2-3 in each group when they are 2 inches high so that the vines will have room to grow.  Keep the plants well-watered and don't over-fertilize or you may end up with vine and not pumpkins.  Despite the many flowers, I typically only see 1-2 fruits per vine.

How do you know when a pumpkin is ripe for harvest?  Pick the pumpkin when it is the desired color (in ‘Cinderella's' case, a deep reddish-orange) and the rind is hard.  You can test the rind by pressing your fingernail against it; if it pierces the rind or leaves an indentation, then the pumpkin isn't yet ready for harvest yet.  When the pumpkin is ripe, cut it from the vine, leaving stem “handles” of at least 2-6 inches. Let the pumpkin cure in the sun for 10 days and then store it in a cool dry place where it will keep for months.

I may decorate one pumpkin as a coach for Halloween.  I think Cinderella would be thrilled! 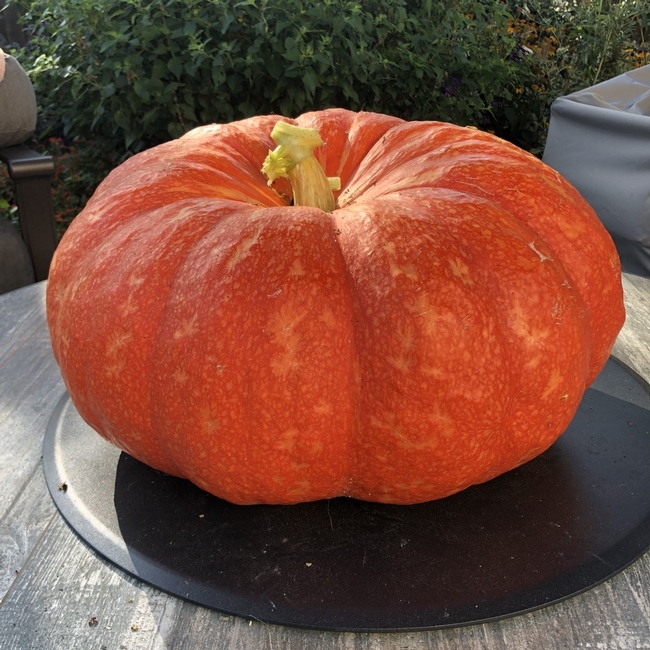 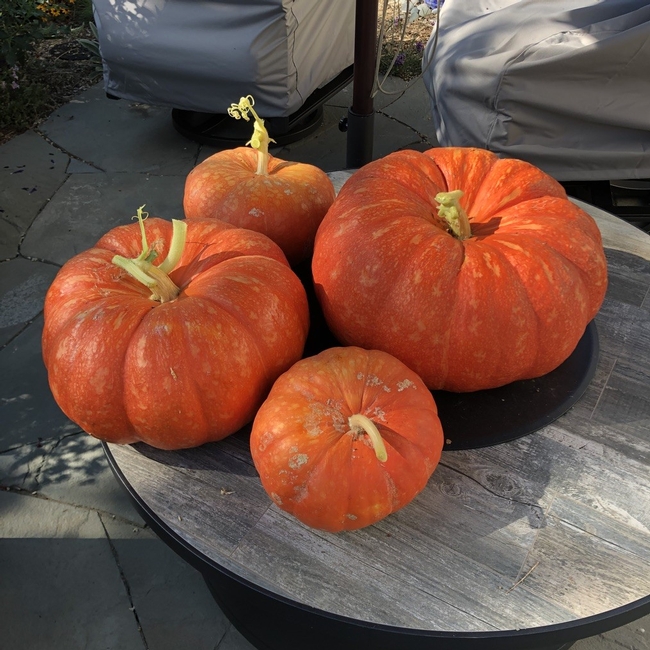 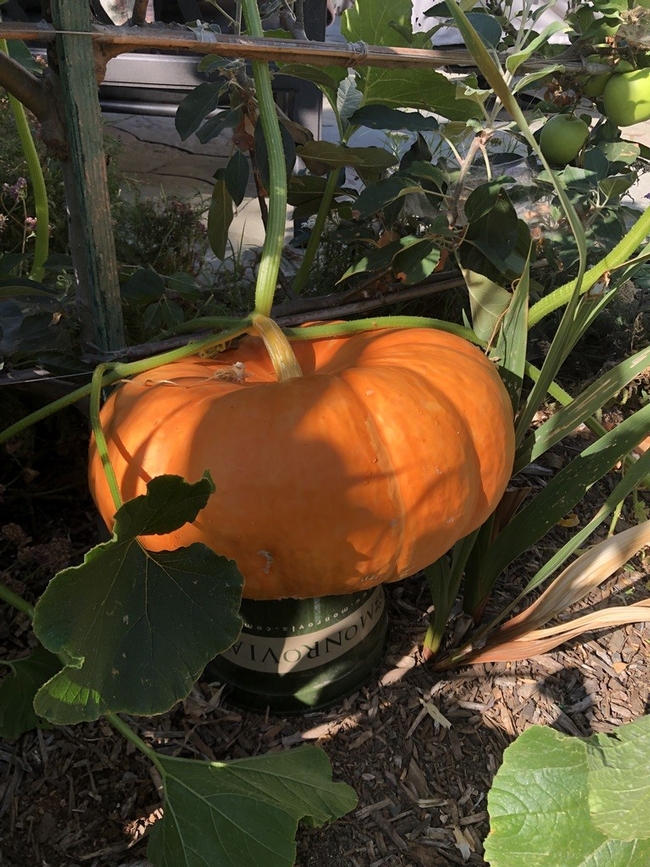 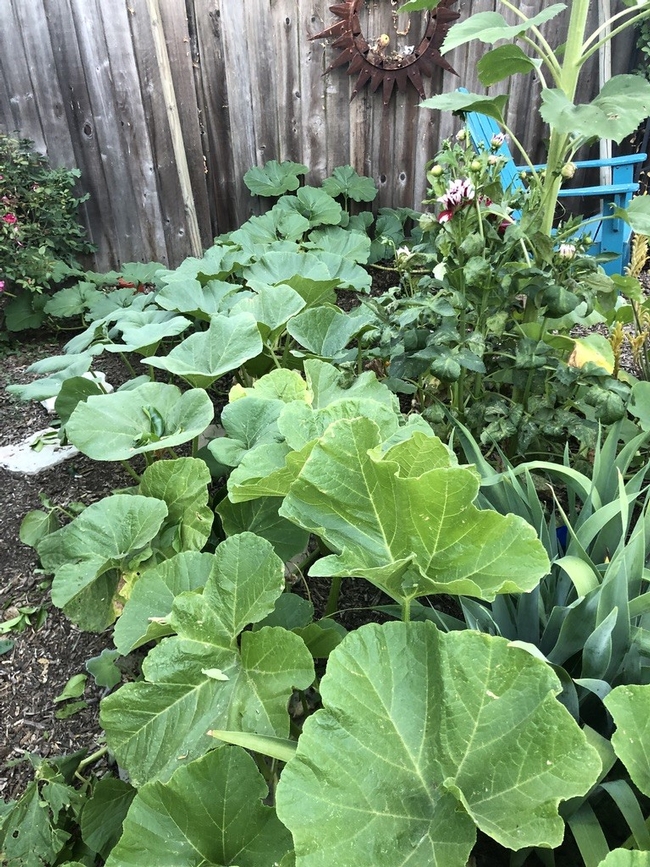 Comments: 1
Comments:
by Wanda Kennedy
on October 8, 2019 at 8:49 AM
Entertaining, seasonally appropriate, educational blog. Thank you for sharing the fun in your garden.
Leave a Reply: