Entomology & Nematology News
sitenum=270
UC News about Entomology and Nematology.
This Bug's for You at the Bohart Museum Open House Sept. 21
Published on: September 16, 2019 A plate of earthworms and crickets. (Photo by Kathy Keatley Garvey)
This bug's for you.

Ever tasted a cricket? A mealworm? An earthworm?

You can if you attend the Bohart Museum of Entomology open house themed "Gobble, Gobble, Munch, Munch, Crunch: Entomophagy,” to be held from 1 to 4 p.m., Saturday, Sept. 21 in Room 1124 of the Academic Surge Building on Crocker Lane.

Open to the public, it's free and family friendly, said Lynn Kimsey, director of the Bohart Museum and professor of entomology at UC Davis.

“The theme is entomophagy and we have some samples from various companies coming our way,” said Tabatha Yang, education and outreach coordinator. Companies providing samples include Hotlix, Exo and Chirps Chips.

Said Kimsey: "Many insects are quite edible and if you try them you might find that crickets are the new shrimp. Personally, I like flavored mealworms."

The event will include learning about entomophagy, sampling insect-based foods, button-making (“I ate a bug at the Bohart”), viewing the collection, and handling insects from the petting zoo, which includes Madagascar hissing cockroaches, stick insects and tarantulas. Yang and Bohart associate Emma Cluff recently completed an online training for food handling, as required by UC Davis.

Bright liked them all. “They're good,” she said, as she tasted red, green and blue earthworms. She described them as having "a sweet and sour taste." The mealworms? “Somewhat cheesy.”

“The crickets are crunchy," she said, adding "I've had them before.” A package of multicolored earthworms. (Photo by Kathy Keatley Garvey)
Bright, who plans to obtain a degree in biology and a field ecology certificate and then her master's degree, joined the Bohart Museum of Entomology/Folsom Lake College team that recently collected insects in Belize. She's studied with Belize bioblitz team leader Fran Keller, an assistant professor at Folsom Lake College who received her doctorate in entomology at UC Davis.

Eighty percent of the world population, including those living in Central and South America, Africa, Asia, Australia, and New Zealand, consume insects as a high protein source. Some 1700 species of insects are edible.

The Food and Agriculture Organization of the United Nations (FAO) has registered some 1,900 edible insect species and estimates that there were, in 2005, some two billion insect consumers worldwide. FAO suggests eating insects as a possible solution to environmental degradation caused by livestock production. Insects and arachnids eaten globally include crickets, cicadas, grasshoppers, ants, various beetle grubs (such as mealworms, the larvae of the darkling beetle, various species of caterpillars (such as bamboo worms, Mopani worms, silkworms and waxworms), scorpions and tarantulas, according to Wikipedia.

Spencer Michels in a PBS News Hour report in May 2017, commented: “But the big advantage of eating insects is that they are generally healthier than meat. A six-ounce serving of crickets has 60 percent less saturated fat and twice as much vitamin B-12 than the same amount of ground beef. ..Bugs also don't spread disease to humans the way cows — think mad cow disease– or pigs can.”

“I do realize that insects do have a bad rap,” California Academy of Sciences entomologist Brian Fisher recently said. “Most people see insects are pests or as dangerous. But it's just the opposite. Insects are less dangerous and less of a problem for humans in terms of disease."

“We do have concerns about disease jumping from animals like pigs and cows to humans,” Fisher said. “But there are no worries about a disease jumping from an insect to humans. The more evolutionary distant we are from our food source, the less danger there is. … There is almost zero chance that any disease that affects an insect could actually impact a human after it's cooked.”

Celebrity bug chef David George Gordon, author of the “Eat-a-Bug” cookbook, extolled the virtues of the “bugs as food” movement when he addressed a UC Davis audience in 2014 at the Robert Mondavi Institute for Wine and Food Science. Insects are an environmentally friendly source of protein, he said, and bug farming reduces greenhouse gas emissions and is exponentially more water-efficient than farming for beef, chicken, or pigs.

The museum is open to the public Mondays through Thursdays from 9 a.m. to noon and 1 to 5 p.m., except on holidays. More information on the Bohart Museum is available on the website at http://bohart.ucdavis.edu or by contacting (530) 752-0493 or bmuseum@ucdavis.edu. (See list of open houses for the 2019-2020 academic year.) 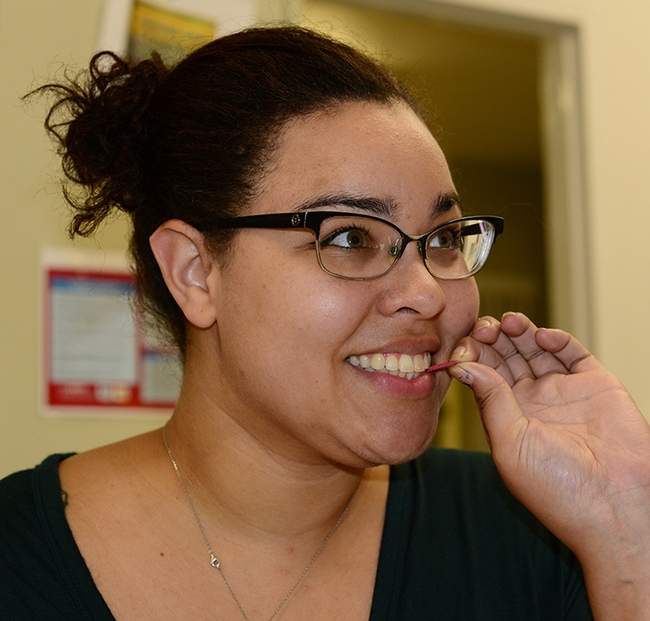