“Elvira proves to be indispensable to our student population, being a source of morale, care and resources, said Striley, co-chair of the Staff Assembly's Citations of Excellence Committee. “For the confused or troubled students, she is first and last resort for solution of problems not only of academic or administrative kind but those of a deeply personal nature as well. Elvira has been invaluable as a student advisor.”

Hack won an award in the highly competitive Individual Service Award category. The annual program singles out outstanding staff for their exemplary work in one of four areas: innovation, research, supervision and service. They all receive monetary prizes and certificates.

The animal biology program is part of the UC Davis Department of Entomology and Nematolgy. Hexter commented that often universities describe “faculty achievement as something like the sun at the center of their institutional universe.” Their achievements, he said, are “the most recognizable sign of our excellence in the public eye.”

“It appears as if staff do their work on the dark side of the moon,” he quipped.

“But those of you who hold a staff position or work with staff know very well this is an incomplete picture of what makes a university great, including ours,” Hexter said, adding that "staff at all levels and in all departments are key to advancing institutional excellence, impact and reputation."

Lauding their passion, expertise.professionalism, "steadfast commitment and very hard work," Hexter praised them for their support of students, faculty and leadership and their drive to work efficiently and effectively. “You play a disproportionately large role on making our two campuses (UC Davis and UC Davis Medical Center) a true community in which all members can feel appreciated, supported, respected and included.”

Hexter, who announced Sept. 17 to the campus community that he will be stepping down from campus leadership in  2020, noted that “these are not facts learned by book but direct experience nearly years 9 years as provost. Without the contributions of an extraordinary staff in my work, the university would roll around like with a wagon with one wheel.”

“Elvira is likely the best academic advisor ever. Not only is she completely conversant with all the rules and regulations of the major, but understands the latitude of flexibility built into their application in a very human way," Kimsey wrote in the nomination packet. "She is connected with all the administrative functionaries necessary to efficiently accomplish any task in a timely manner. For the confused or troubled student, she is the first and last resort for the solution of problems not only of an academic or administrative kind but those of a deeply personal nature as well. She keeps them on track, outlining their options, helping them decide on their future professions, and the direction their life should take.  She has been invaluable to me as the master advisor.  She really does care about a student's fate.  Moreover we have had great fun doing these tasks together.” (See feature story) 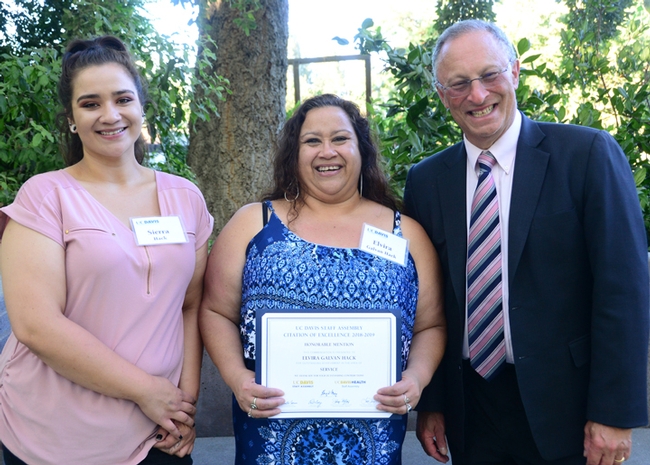