On a recent trip to the East Coast, our first in almost 13 years, I reflected on our differing coastal experiences with agricultural diversity. Our travels took us through most of the mid-Atlantic farming region – Delaware, District of Columbia, North Carolina, Virginia, West Virginia and Pennsylvania – where we lived for almost 35 years.

We saw the familiar vast fields of corn, soybeans and alfalfa throughout most of the region. There were occasional pockets of other crops: apples, pears and grapes in the more northern parts; sorghum, sweet potatoes, peanuts and tobacco in the more southern states. We also saw occasional plots of sweet corn, green beans, oats and barley. But mostly we saw corn, soybeans and alfalfa.

We stayed at our cousins’ farm in Warriors Mark, Penn. Guess what they were growing – corn, soybeans and alfalfa. However, this year they were also growing Timothy hay for the local “hobby” horse population, as cousin Hank likes to call his high-paying customers. Our cousins have a huge vegetable garden, but do not farm vegetables because, they say: ”We can’t make any money from vegetables, they are not as profitable as the common three field crops." This seems to be the reasoning behind the tri-crop standard.

When we moved from central Pennsylvania to central California 15 years ago, we were intrigued, but mostly mystified, by the crops growing in fields near our home. With the help of new friends and colleagues, we eventually learned to identify fields of sunflowers, tomatoes, walnuts and almonds. We were astonished by the diversity of crops in our new home state, and intrigued by our lack of knowledge about crops we saw by daily. As we traveled throughout the state, our ability to identify roadside field crops grew. We saw acres of artichokes, lettuce, pistachios, figs, olives, kiwi fruit, avocados, all new as field crops to us. Using guides and manuals we found in the ANR Catalog for vegetables, fruit and nut crops, and agricultural production as well as the Fruit & Nut Research and Information Center website photo albums, we were able to identify most of what we saw. We also identified quite a few acres planted in the familiar corn and alfalfa, but hardly any soybeans.

We discovered what was growing in a nearby field when our eyes began to water and our throats close as a field of garlic was harvested. We had the same reaction to rice straw as it burned and canola harvested in a cloud of dust. The first time we saw acres and acres of sunflowers and an almond orchard in full bloom, we couldn’t help but smile. Our sense of smell also assisted in our discovery of newly harvested fields of squash, olives and tomatoes.

You can find more than the acres of corn, soybeans and alfalfa growing along the East Coast, but exceptions are usually planted in a very few acres and in limited locales. However, California’s crop diversity is readily apparent along every highway and byway in every county. Thank goodness! 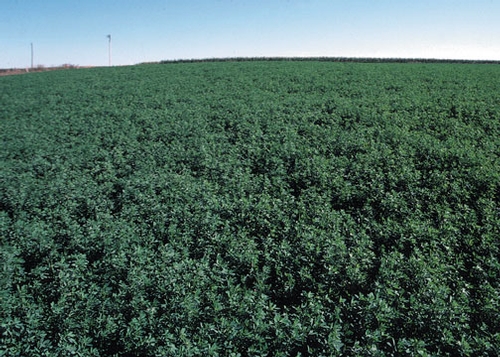