A feast grows in Baldwin Park

The Baldwin Park Community Garden sits in the shadow of the San Bernardino Freeway in Eastern Los Angeles County. As the cars rush by, an effective and innovative community garden grows. A unique public-private partnership has made this garden possible to benefit the community and local children.

The garden, which is approximately a quarter acre in size, has both school and community plots. The land and financial support are provided by Kaiser Permanente. The City of Baldwin Park helps to maintain the garden. The Baldwin Park Unified School District uses the garden to engage fourth graders from four classrooms at two elementary schools in hands-on nutrition education through a project called “The Moveable Feast.”

The Moveable Feast conducts in-garden nutrition lessons, each of which includes an easy, healthy recipe using garden produce. Each month’s nutrition lesson ties into cultural and community awareness. For example, as the recession deepened, Moveable Feast Director Linda Hahn wanted lessons to tie in with the growing problem of hunger in the community.  She had students prepare two “Rainbow Pita Pocket Sandwiches,” one for themselves, and one for a person in need. Hahn worked with the local food bank to distribute the extra sandwiches.

The garden activities have had a measurable impact on the kids. A survey of the students suggested that 87 percent eat more fruits and vegetables after having participated in the garden.

We receive many requests from teachers, community members and others who are interested in starting gardens. Our Common Ground Garden Program at UC Cooperative Extension in Los Angeles provides printed resources, and sometimes the support of UC Master Gardener volunteers.

Over the years, we've seen many projects succeed, and also many projects that come and go. The Baldwin Park Garden is a great example and seems to have three key ingredients that help to ensure and sustain its success:

For the kids, its success is very simple. As one student stated, "The garden is the best place I have gone since I entered fourth grade. It is the best garden in the world." 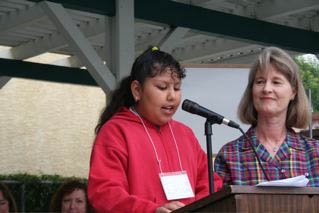