Happy New Year everyone. Let's see that we have a good season coming up here.

Just rolling through old Powerpoint presentations looking for some information on herbicides for a local grower put me on to this presentation I made on leafroller control in 2008.  If you recall this is when the light brown apple moth issue was just kicking in, and it made an understanding of insecticide efficacy on this class of insects really important.  Sorry I never got this out before, I'm just always really busy so it's hard to keep up.

Materials and Methods: As can be seen in Table 1 below, sprays were done at approximate ten day intervals of 4 different materials, two of which, Dipel (Bt) and Delegate (spinetoram), were tested at early and late initiation dates.  Materials were applied at 150 gallons per acre water carrier, with a motorized backpack sprayer with pistol applicator at a pressure of 150 psi.

Evaluations were done one day before the first application, and then 7, 21, 42 and 63 days after that.  Leafrollers were counted by shaking both sides of 3 feet of the blackberry hedgerow within each treatment replicate into a similarly wide tote supported at waist height below the area of agitation, and then the expulsed leafrollers counted there.

Collected leafroller numbers were compared using the Analysis of Variance function on ARM 9 (Agricultural Research Manager).  Data is presented below in three figures.  The first is a comparison of the four insecticide applications begun on 4/7 and the untreated control, and the second figure is of the Dipel and Delegate applications which began later on 5/15 and the untreated control. The last figure, in an effort to gauge the total efficacy of each material and/or timing, is a sum and comparison from each treatment of all leafrollers collected through the course of a study.

Table 1: List of materials, rates and dates of application for 2008 leafroller study

Results and Discussion: It's clear from the data given in the figures below that Assail is an inferior material when dealing with leafrollers, while Dipel, Entrust and especially Delegate do quite well.  It is notable how long the effect of use of these three materials, applied in succession over 21 days, remains, with significantly lower numbers of leafrollers in treated plots than the untreated control 40 days after the last application.

Interestingly, delays in commencing application by five weeks on extant populations of leafrollers did not necessarily result in significantly higher numbers of leafrollers when deploying either Dipel or Delegate.

Many thanks to Ed for his collaboration on this work and so many other projects, I don't think this one would have happened at all had we not been doing so many things together already. 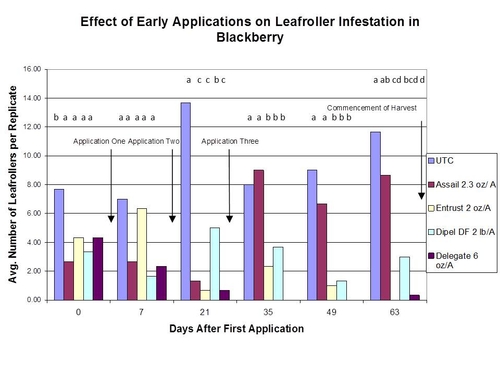 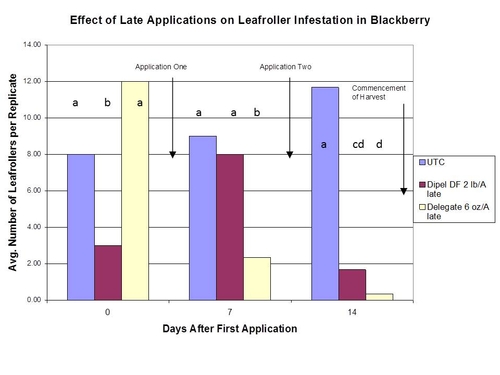 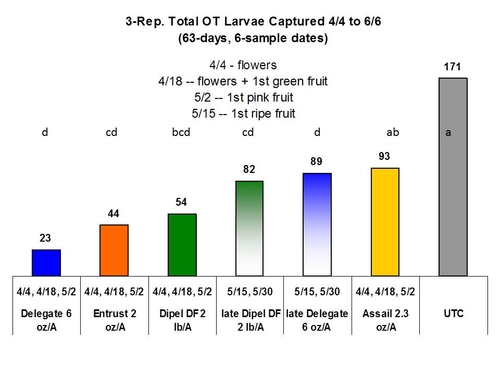