In less than 48 hours, nearly 500,000 people have seen them—but not in his restricted-access lab.

His research subjects are blood-sucking tsetse flies, and PBS featured them in its Deep Look video, “A Tsetse Fly Births One Enormous Milk-Fed Baby,” released Jan. 28, and its accompanying news story.

Infected tsetse flies transmit the parasite that causes human and animal trypanosomiasis, better known as sleeping sickness. “The parasite invades the central nervous system and disrupts the sleep cycle,” says Attardo, a global authority on tsetse flies and an assistant professor in the UC Davis Department of Entomology and Nematology. “If not treated, the disease can result in progressive mental deterioration, coma, systemic organ failure and death.”

“PBS sent out a film crew and we spent about two days filming,” he said. The video also includes footage from Africa that PBS purchased, and video of a tsetse trap that Attardo filmed in the Nguruman Escarpment, Kenya, on the border of Tanzania.

Attardo researches one of 35 tsetse fly species, Glossina morsitans morsitans, which prefers feeding on cattle to humans. Its strong mouthparts can easily puncture the tough cattle hide. In his lab, he feeds them warm cow blood.

Tsetse flies, which resemble house flies, are distinguished from other Diptera by unique adaptations, including lactation and the birthing of live young, Attardo says. Just like mammals, tsetse flies, deliver babies and feed them milk. A female produces more than her body weight in milk.

“We mammals like to think we're pretty special, right?” the video begins. “We don't lay eggs. We feed our babies milk. Well, this very pregnant fly is about to prove us wrong. Yep, this tsetse fly is in labor. And that emerging bundle of joy is her larva. While other insects can lay hundreds of eggs, she grows one baby at a time inside her, just like us. Congratulations!”

The accompanying news story, by Gabriela Quirós,  explains that Attardo is “trying to understand in detail the unusual way in which these flies reproduce in order to find new ways to combat the disease, which has a crippling effect on a huge swath of Africa.” A gravid (pregnant) tsetse fly, Glossina morsitans morsitans.(Photo by Geoffrey Attardo)
According to the World Health Organization (WHO) , 65 million people in 36 countries in sub-Saharan Africa are at risk for sleeping sickness. Actual cases, due to better control methods and better reporting, are dwindling: from more than reported 40,000 human cases in 1998, to 997 new cases in 2018. WHO estimates cattle losses between $1 billion and $5 billion per year.

The video shows tsetse flies feeding on cattle, at which point the script reader explains that

“Geoff Attardo…hopes to help. He's trying to stop tsetse flies from making babies in the first place. A female only mates once in her life, enough to make the 10 or so babies she'll have. The male makes sure she doesn't mate again by delivering a substance that makes her lose interest in sex. Scientists are trying to figure out what it is. If they could bottle it and spray it, female tsetse flies may never get busy at all. No more tsetse offspring to worry about.”

Attardo says that tsetse flies deliver only one offspring at a time, as compared to insects that lay hundreds or thousands of eggs at one time. Spraying insects and setting traps can reduce the number who develop the disease, but the insects may become resistant to the chemicals.

Once a female mates, storing the sperm she'll birth in a lifetime, the male delivers “a substance that makes her lose interest in sex,” Quirós wrote. It is that substance or what Attarado calls a “reproductive dead end,” that Attardo wants to replicate, to bottle and spray on the tsetse flies..

“The females definitely are making the decisions,” Attardo told Quirós. “She'll sort of tuck her abdomen underneath her body to prevent him from gaining access, and buzz her wings and knock him off.”

The news story also touched on a bacterium, Wigglesworthia glossinidia, found inside the females that apparently has a role in milk production. “When they kill the bacteria with antibiotics, female flies are no longer able to grow a larva, “Queros wrote. “Young larvae stop growing inside their mothers and are aborted. The results of an experiment by Attardo, which he hasn't published yet, suggest that this happens because flies without the bacteria have trouble making milk.”

Last fall, Attardo published landmark research that provides new insight into the genomics of the blood-sucking tsetse fly. The paper, published Sept. 2 in the journal Genome Biology, compares and analyzes the genomes of six species of tsetse flies and the research could lead to better insights into disease prevention and control.

“It was a behemoth project, spanning six to seven years,” said Attardo. “This project represents the combined efforts of a consortium of 56 researchers throughout the United States, Europe, Africa and China.”

Attardo joined the UC Davis Department of Entomology and Nematology in 2017 after 13 years at the Yale University School of Public Health, New Haven, Conn., first as a postdoctoral fellow from 2004 to 2008, and then as associate research scientist and research scientist.

A native of Poughkeepsie, N.Y., he received his bachelor's degree in entomology from the University of Massachusetts, Amherst, in 1994 and his doctorate in genetics from Michigan State University, East Lansing, in 2004.

(Editor's Note: By popular demand, Attardo plans to again show his virtual reality bugs this year at Briggs Hall during the campuswide UC Davis Picnic Day on Saturday, April 18. "We have some new 3D data showing the internal reproductive organs of the tsetse fly that we plan to adapt to virtual reality.") 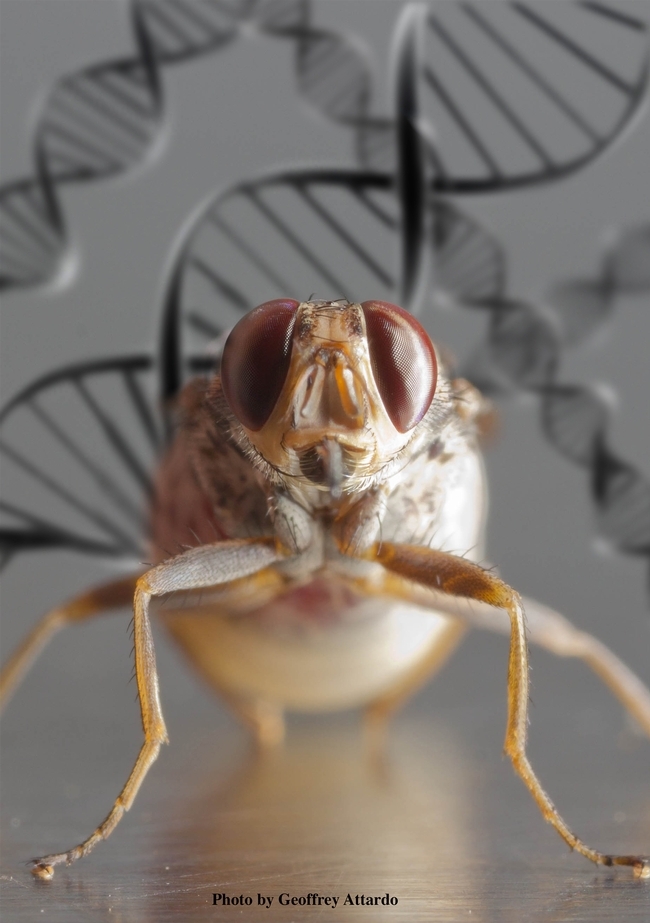