Bug Squad
sitenum=63
Happenings in the insect world
Oh, for a Water Bear Sculpture at the Bohart Museum! Kimsey, director of the Bohart Museum and UC Davis professor of entomology, hopes to fund the artistic concrete sculpture, measuring about 4 feet by eight feet, as soon as possible. Her GoFundMe account at https://www.gofundme.com/f/waterbear-sculpture seeks $5000.

"Folks, we're on our way," Kimsey wrote on the site. "A private foundation just gave us $5,000 to match our GoFundMe campaign."

Why a tardigrade sculpture at UC Davis? "The reason for this is that we have one of the world's largest tardigrade collections, which was compiled by (senior museum scientist) Steve Heydon's predecessor, Bob Schuster," she said. "Tardigrades are really popular with kids in part because of their representation in the movies Ant-Man and Ant-Man and the Wasp, Star Trek and Family Guy."

She's been in touch with the sculptor Solomon Bassoff (Faducciart) in Roseville. "He did the caterpillar in the Davis Central Park," Kimsey noted. In appearance, the water bear seems as cuddly as a teddy bear. It has a barrel-shaped body and eight pudgy legs. The adults usually range from 0.3 to 0.5 mm in length. (Courtesy of Wikipedia)
Kimsey wrote about the tardigrades in a recent newsletter. The water bear "has to be one of the most peculiar and indestructible groups of animals known. The microscopic and nearly indestructible tardigrade can survive being heated to 304 degrees Fahrenheit or being chilled for days at -328 F. And, even if it's frozen for 30 years, it can still reproduce." See video on EurekAlert.

The Bohart collection includes some 25,000 slide-mounted specimens. Kimsey and collaborator Carl Johannsen work on a National Science Foundation grant "to database and conserve" the collection. "This collection is the result of years of collecting, mounting, imaging, and identifying by former collection manager Bob Schuster and emeritus professor Al Grigarick and their collaborators," Kimsey points out. Water bears are more popular than teddy bears at the Bohart Museum of Entomology. This is from the gift shop. (Photo by Kathy Keatley Garvey)
In appearance, the pudgy water bear seems as cuddly as a teddy bear. It has a barrel-shaped body and eight pudgy legs. The  adults usually range from 0.3 to 0.5 mm in length.

They're easiest to find on lichens and mosses, Kimsey says, but they can also be found on beaches, in the subtidal zone, freshwater sediments, soil, hot springs and even on barnacles. They've been found "high in the Himalayas to down in the deep sea." They've even been found in the interior of Antarctica.

Says Kimsey: "Tardigrades are awesome. They can dry out completely and then become immortal. In fact, SpaceIL may have left thousands of dried tardigrades on the moon when it crashed earlier this year."

Meanwhile, the Bohart is bearing up for the water bear sculpture.

The Bohart Museum is open to the public Mondays through Thursdays from 9 a.m. to noon and 1 to 5 p.m., except on holidays. Open houses are held periodically on the weekends; see schedule. More information is available on the website at http://bohart.ucdavis.edu or by contacting (530) 752-0493 or bmuseum@ucdavis.edu. 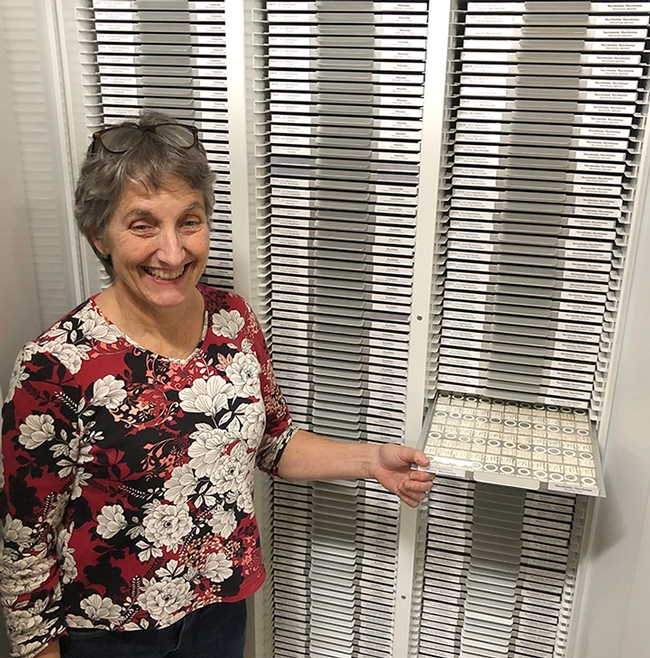 Lynn Kimsey, director of the Bohart Museum of Entomology, with part of the tardigrade collection. The Bohart collection includes some 25,000 slide-mounted specimens. (Photo by Kathy Keatley Garvey) 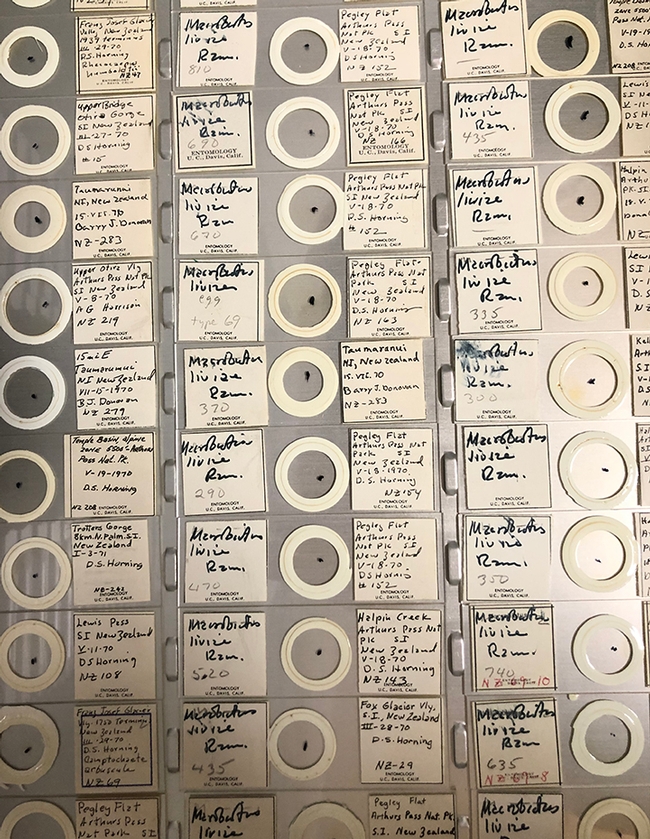