UCANR: Building climate-resilient communities and ecosystems
A Garden Makeover
Part 3: The Plants
Published on: May 4, 2020 Much more curb appeal than a dried-up lawn.

Those plots on the south side, nearest the house, are in full shade for all of the winter months when the ground is also frequently frozen. Then as the sun gets higher and clears the house roof it becomes subject to ferocious afternoon sun for several hours a day, rendering it unsuitable for shade-loving plants, but at the same time not ideal for the sun lovers either. Since these were being solarized I did no planting here in 2019.

The plots on the north side of the area get full sun in winter, but after trees have leafed out they get varying amounts of shade during the day which is welcomed by some species but renders them unsuitable for many of the sun-loving desert plants.

The irrigation is turned off for much of the winter so plants that like a Mediterranean type climate which rely on winter rains for their main growth are not likely to do very well, furthermore since the area is very exposed to the north it is subject to some pretty cold temperatures.

I wanted the garden to look equally good from all directions – the road, the house and the patio. For best effect visuall,y and in order to entice insects such as butterflies, conventional design wisdom encourages one to plant in groups of three, to limit the different number of species, and to repeat a theme several times across the planting area. I did not keep to this since some individual plants make substantial clumps on their own, and in order to keep costs down and try out several different plants I frequently only purchased one specimen with a view to adding to them later if they did well. I had several large clumps of perennials such as coreopsis, agastache, and rudbeckia which I dug up from other areas of the garden. I had taken cuttings of sedums, which together with numerous volunteer seedlings such as gaura, echinops, and eryngiums, formed a foundation for planting. A variety of different colors and textures

It is all too easy to end up with a prevalence of mounding plants so I was careful to have a variety of shapes – upright (Berberis “Salmon Rocket”), spikey (pink muhley grass) and ground-hugging (Callirhoe involucrate) and mounding (Nepeta “Walkers Low”). Leaf color adds interest so I looked for plants with red (border penstemon), yellow (Agastache “Royal jubilee” and ninebark “Darts Gold”) , gray (Artemesia “Powis Castle”), blue (Festuca “Siskiyou Blue”), and lush green leaves (annual Mirabilis). And of course I wanted lots of flowers for the pollinators to enjoy throughout a long season.

In spring clumps of blue muscari and Euphorbia myrsinites with its gray foliage and chartreuse flowers are some of the earliest attractions, followed by mats of Phlox subulata, blue flax, and catmint, after which the summer flowers come into their own: Salvias, Centanthus, Cistus, Scabiosa, Echinops and Buckwheat. In fall the humming bird mints (Agastaches) and mats of California fuchsia (Zauschneria “Everett's Choice”) round off the year. Any bare patches between plants are filled with such things as spring bulbs, California poppies, four o'clocks, or red annual buckwheat. Individual beds are easy to maintain.
Results: I traded mowing the lawn for light weeding and deadheading but infinitely prefer these activities. One of the delights with this project has been meeting different people who stop and chat as they walk by. Even during the first summer when plants were small and hardly established numerous people enthused, and so far this year I have received compliments on an almost daily basis.

Of course, I have made some mistakes. The yellow leaved ninebark got scorched by the sun just as it was leafing out, and I had placed two artemesias in one of the plots but by the end of the first year they had become very large and were threatening to take over. I really need more white flowers of different shapes and textures. The yarrow that I bought as an unlabeled cell pack and planted close to the front has turned out to be yarrow on steroids and will definitely be moved at the end of the year!

My decision to not use mulch has not been a problem. So far I have only had to do a minimal amount of weeding and the sandy soil is quick and easy to hoe. I also get a lot of satisfaction watching ground-nesting black wasps or native bees making use of the bare soil. However, I have seen some velvet ants which like the bare sand, a reminder that it is prudent to wear gloves when tending low-lying plants.

It became apparent that the winter season needs some attention since most of the plants became very dormant and we were back to bare soil again! I need a few more evergreen plants  or grasses to add interest. Salvias are hard to beat for variety and color

Many square feet of irrigated lawn have been replaced with decomposed granite using no water at all.  The planting areas are irrigated far less often than the previous grass covering, and I hope to reduce the amount even further once the plants are more established.

It is so gratifying to see tattered painted lady butterflies finding plentiful supplies of nectar after their long migration, or seeing the many different bees – Ceratinas, sweat, cuckoo, carpenter and domestic as well as several different wasps and lots of different flies! Lizards have moved in for the feast, and it is only now that I realize how sterile our old lawn was! 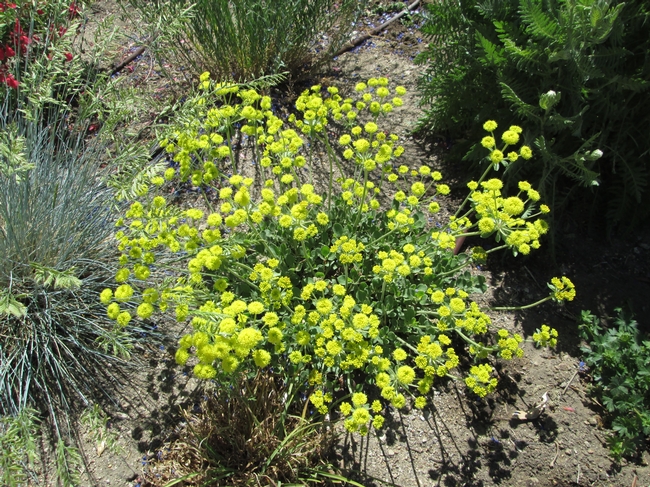 Showy native plants include buckwheat.
Public Value: UCANR: Building climate-resilient communities and ecosystems
Tags: Design (2), landscape (7)
Comments: 1
Comments:
by Bobbie Stryffeler
on May 10, 2020 at 9:53 AM
Hi Alison. Looks beautiful and what a change! Glad you're enjoying it too.
Login to leave a comment.