A tachinid-infested monarch caterpillar. A fly larva slips down on the "bungee cord." (Photo by Kathy Keatley Garvey)
Being quite obliging and considerate, we like to give the monarchs, Danaus plexippus, in our Vacaville pollinator garden a choice:  tropical milkweed, Asclepias curassavica (which we cut back in the fall to prevent the parasite Ophryocystis elektroscirrha or OE); narrowleaf milkweed, Asclepias fascicularis; and showy milkweed, Asclepias speciosa.

Which one is the most popular? Initially, it was the tropical milkweed, A. curassavica. We collected the first five caterpillars there. The A. fascicularis yielded the rest.

To date this year, we have released six monarchs back into the garden. The others went for university research. Elizabeth Pringle's laboratory at the University of Nevada, Reno, needed male and female monarchs to rear a colony, and the UC Davis laboratory of Louie Yang needed some tachinid flies.

Unfortunately for us--and fortunately for the Yang lab--tachinid flies infested two of our "11-piece collection."  The adult flies are parasitoids that lay their eggs in immature monarchs (among other hosts). The fly larvae hatch and eat their host from the inside out. In a chrysalid, you can tell a tachnid fly infestation by the large tell-tale "dented" brown spot, it looks somewhat like a rotten spot on an apple. In a caterpillar? Think withered and discolored. Then a bungee-like white string appears, and the larvae (maggots) slide down--probably gleefully--like a kid on a Goliath Slide at the county fair.

Tachinids, however, are considered beneficial insects. They lay their eggs in or on such pests as cabbage loopers, cutworms, cabbage worms, gypsy moths, hornworms, harlequin bugs, lygus bugs, cucumber beetles, earwigs and the like. (See Bug Squad blog for close-up images of the tachinid larvae and pupae.)

2016: A Very Good Monarch Year
The year 2016 was a very good year for monarchs in our pollinator garden; we reared and released 60-plus. Sadly, the numbers fell drastically in 2017, 2018 and 2019. Last year,  no eggs, no caterpillars and no chrysalids, and only a few monarchs passed through. In fact, in 2019 we did not see our first monarch until Aug. 9.

This year we're noticing a comeback of sorts. We spotted the first monarch on May 24. We now see:

Sometimes the Gulf Fritillaries, Agraulis vanillae, that are hanging out on their host plant, the passionflower vine, mistake them for one of their own species and a pursuit begins.

Yes, the predators are out there: the California scrub jays, praying mantids, spiders, European paper wasps and yellow jackets.  So are the tachinid flies and parasitoid wasps.

Would it be too much to ask them to...um....leave our monarchs alone? Yes.

Everybody eats in the garden. The menu choice is theirs. 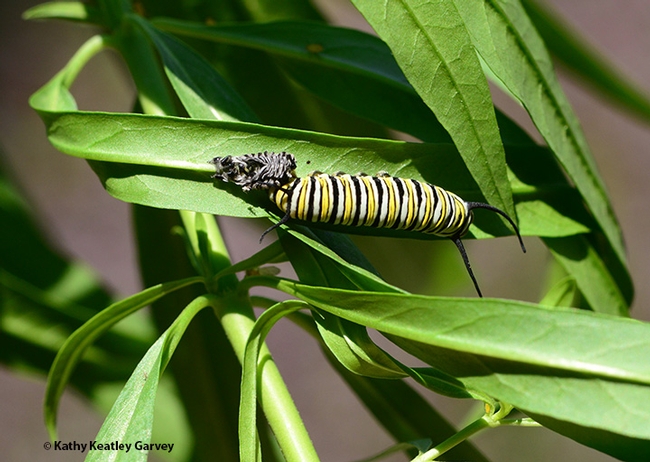 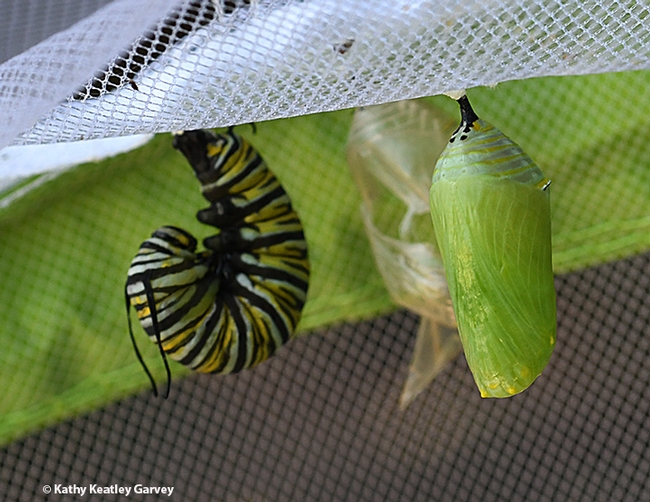 A monarch caterpillar j'ing; soon it will be a chrysalis. (Photo by Kathy Keatley Garvey) 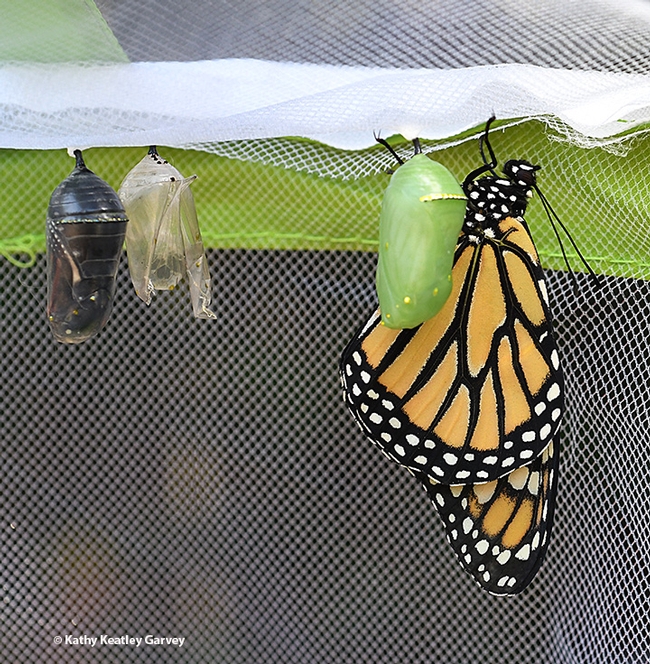 From left, a chrysalis about to release a monarch; an empty chrysalis or empty pupal exoskeleton, exuvia; a chrysalis; and an newly eclosed adult monarch. (Photo by Kathy Keatley Garvey) 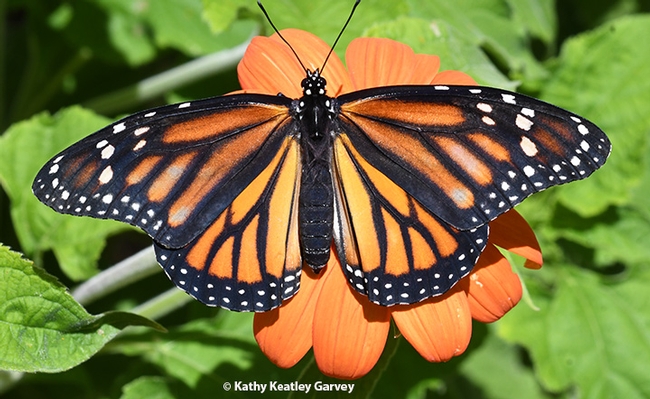 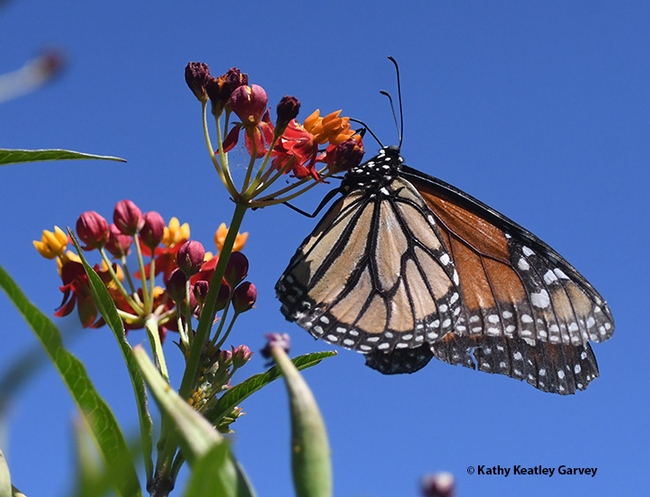