Two thinning studies in the southern Sierra Nevada resulted in enhanced acorn production. A thinning experiment evaluating three levels of stocking for blue oak (Quercus douglasii Hook. & Arn.) was initiated in 1994 near California Hot Springs, California in Tulare County. The goal of the thinning was to evaluate how oak canopy overstory levels affected individual and stand tree growth, forage production, grassland diversity, and oak regeneration. The control level for the unthinned stand was close to 100 square feet per acre with a tree canopy level of 55 percent. The stands were thinned to 1/3 and 2/3 of the existing basal area level. In the first year after thinning, in addition to tree and grassland measurements, there was a measurement of acorn production by rating each tree using the four-class system developed by the Department of Fish and Game (see below). A second thinning study was carried out on interior live oak (Quercus wislizenii A. DC.) near North Fork, California in Madera County. This was a dense (close to 100 percent canopy cover) that developed after a wildfire 40 years previously. The same three thinning treatment levels were carried out, namely control/unthinned (75 square feet per acre), and a 1/3 and 2/3 thinning. In addition to tree growth, regeneration, and forage production data, acorn yields were also evaluated using the same procedure described above. Figure 2 shows the results of three years of observations on interior live oak acorn production. Thinning resulted in a significantly higher proportion of trees with acorns in all three years surveyed. Discussion
We evaluated the fire history of the blue oak thinning area using fire scars, and found the fire return interval from 1851 to 1966 was 12.8 years (+2.3 years), with no fires on the site since 1966. We might speculate that the historical density of blue oak stands was much lower during the period of regular fires, and the thinning created more open conditions that mimic the effects of a period of frequent, low intensity fires. The live oak stands were quite dense, following 40 years of fire exclusion. The more open stand conditions created by the thinning for both species in these studies resulted in a higher probability that a tree would produce acorns. Blue oak produces acorns that mature in the fall of the first year after spring flowering, while interior live oaks produce acorns that mature in the fall of the second year after flowering. Despite the differences in the physiological processes guiding acorn formation between these two species, these two studies show that thinning may play a key role in the yield of acorns from our oak woodlands. 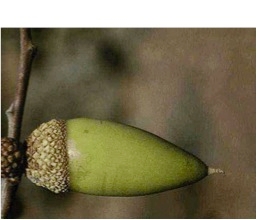 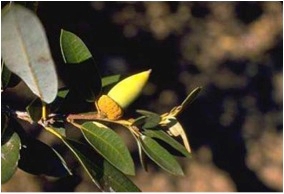