Lynn Kimsey, director of the Bohart Museum of Entomology, holds an Asian giant hornet specimen, or "murder hornet." She has not intention of eating it.
Cockroaches for dessert?

Yes. Tune into the latest UC Davis Unfold Podcast by journalists Amy Quinton and Kat Kerlin and you'll learn about (1) their visit to the Bohart Museum of Entomology (2) their interview with the director, Lynn Kimsey, UC Davis distinguished professor of entomology, and (3) what Kimsey once ate for dessert while engaged in field work in Panama.

Listen to the podcast and you'll learn:

You'll learn how Lynn Kimsey managed to eat a cockroach for dessert.

"When I was working in Panama at the field station run by the Smithsonian, and the cooks decided to make us a big treat because we hadn't had, you know, any fancy food for a while," Kimsey told the Quinton-Kerlin team. "So they made oatmeal cookies with raisins, which is awesome, right out of the oven. You know, I took a big bite out of mine and then I realized that the raisin that I just bitten in half and swallowed, had LEGS. Oh, and, you know, cockroaches kind of taste the way they smell that kind of.. .yeah."

Amy Quinton: "Lynn says it was completely unintentional, cockroaches were not on the dessert menu."

Kat Kerlin: "Oh, my God, that is so gross. So she didn't eat them on purpose?"

Amy Quinton: "No, she told me no one eats cockroaches on purpose. Here's why. Apparently, they pee into their own fat in their bodies and store it there. It makes them taste awful.

Kat Kerlin: "Oh, that's so gross. Oh, my gosh. And they're going to outlive all of us."

So Bug Squad asked Lynn Kimsey about her Blattodea dessert, the encroaching roach masquerading as a raisin.

"The roach I ate in the cookie was an American cockroach, probably a juvenile, about half the adult size," she commented.

Was she the only one to partake of the roach? "I didn't hear anyone else find a roach in their cookie."

By the way, Kimsey has no plans to munch on the Madagascar hissing cockroaches, aka "hissers," that are an integral part of the Bohart Museum's live "petting zoo."

In case you wanted to know. You're welcome. 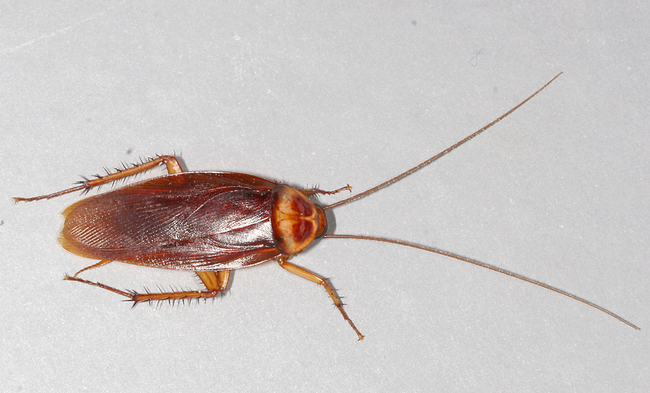