Entomology & Nematology News
sitenum=270
UC News about Entomology and Nematology.
Adam Steinbrenner: How Plants Detect That Insects Are Eating Them
Published on: February 19, 2022 "From the moment of initial encounter with an insect herbivore, a suite of inducible plant defenses are triggered; however, the molecular mechanisms for recognition and response are not highly studied," Steinbrenner writes in his abstract. "Specific molecular patterns from insects can serve as elicitors of defense responses on host plants, but precise receptors mediating such responses have remained elusive. We recently identified a cell surface receptor, Inceptin Receptor (INR), which detects a set of ubiquitous peptide fragments found in the oral secretions of Lepidopteran larval herbivores. INR is specific to select legume species and may structure insect host range across this plant family. We hypothesize that INR serves as a recently evolved and highly potent mechanism to perceive a specific danger signal, above and beyond cues associated with generic tissue damage. I will discuss our recent transcriptiomic characterization of inceptin responses in bean and cowpea, highlighting strong anti-herbivore defense outputs which occur after inceptin treatment but not wounding alone. I will also compare plant responses to herbivory with well-characterized pathways mediating recognition of microbial pathogens."

Steinbrenner focuses his research on cell and molecular biology, genetics and genomics, and plant biology. He holds a bachelor of science degree in biology from Tufts University (2010) and a doctorate from UC Berkeley in plant biology (2015). He was awarded a Howard Hughes Medical Institute Postdoctoral Fellowship of $180,000 in 2016 and studied with Eric Schmelz at UC San Diego.

The Steinbrenner lab studies the molecular bases of plant immunity to pathogens and pests. "We are specifically interested in recognition and signaling functions of cell surface receptors and evolutionary processes driving novel immune specificity," he says on his website.

Steinbrenner served as the lead author of a paper published Nov. 23, 2021 in the Proceedings of the National Academy of Sciences on how cowpea plants detect that they're being eaten by caterpillars. In the article, A Receptor-Like Protein Mediates Plant Immune Responses to Herbivore-Associated Molecular Patterns, scientists from the University of Washington and UC San Diego reported that the cowpea plants harbor receptors on the surface of their cells that can detect a compound in caterpillar saliva and initiate anti-herbivore defenses.

"Despite chemical controls, crop yield losses to pests and disease generally range from 20-30 percent worldwide," Steinbrenner related in a University of Washington news release. "Yet many varieties are naturally resistant or immune to specific pests. Our findings are the first to identify an immune recognition mechanism that sounds the alarm against chewing insects.”

Wrote UW science writer James Urton: "The team showed that, in response to both leaf wounds and the presence of a protein fragment specific to caterpillar saliva, the cowpea's INR protein boosts the production of ethylene, a hormone that plants often produce in response to munching by herbivores and other types of environmental stress. The protein fragment in caterpillar spit that elicited this response, Vu-IN, is actually a fragment of a cowpea protein, which gets broken down by the caterpillar as it dines on cowpea leaves."  (See full article.) 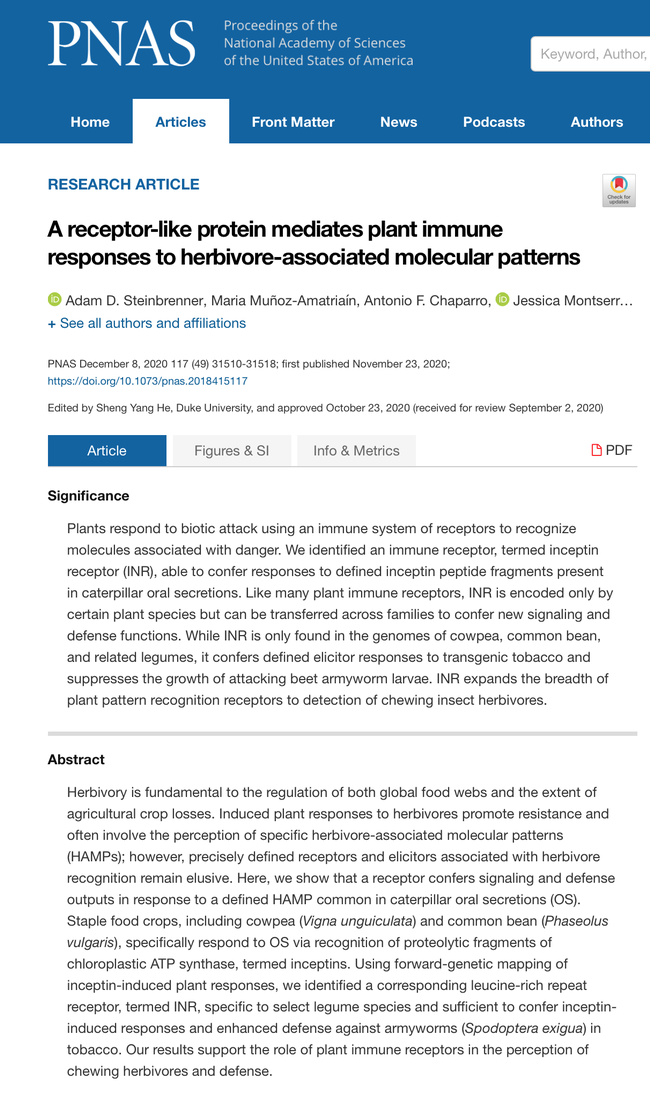