I was taken to several raspberry fields today to investigate an unusual and rather concerning plant disorder.  As one can see from the pictures below, leaves were significantly yellowed, with an abrupt change without regard to leaf venation from yellow to green in many cases.  Some leaves had fallen off, and severely yellowed leaves fell off at the touch. Within the field of yellow, there were many spots of green.  The undersides of the leaf were showing the same, but with the addition of fluffy orange spots throughout. The symptoms were widespread and affected the lower quarter to third of nearly every plant in the visited fields.  Clearly, this was fungal but the question was what fungus?

The literature does admit that downy mildew can occur on raspberries and even result in yellow discoloration.  However, this disease is always marked by purple blotches on the upper side of the leaf, and fluffy mycelial growths on the underside of these very spots.  Microscopic evaluation of several infected leaves today gave no sign of the telltale bunches of mildew mycelia and sporangia masses.  This disease is definitely not downy mildew, since few of the symptoms are consistent with this pathogen.

Rather, and this can be seen from the photos below, the masses of orange to yellow spores on the undersides of infested leaves had were typical of the rusts, and in many more advanced cases one could find the diagnostic teliospores of Phragmidium rubi-idaei, the causal organism of yellow rust.

The extent of leaf yellowing in the pattern depicted below is unusual.  Especially the sharp demarcation of green to yellow.  Short of the defoliation, the literature does not refer to yellowing of the leaf in association with yellow rust infestation.  This bears watching.

Growers report that these symptoms have appeared very rapidly, and have advanced significantly over the past few days.  Rust spore germination is contingent on water, so that we have had a significant rainstorm followed by mostly cool weather since has a lot to do with the severity of this current epidemic, in my opinion.

The rusts are controlled by a reduction of moisture.  One way is of course to increase air circulation in the hedgerow, but even better is the use of tunnels which sharply reduce the humidity on and around the plants.  The fungicides Rally and Pristine are registered and very effective against rust.  Organic growers have access to fixed coppers and oils.   All of these materials can reduce fruit yield if used excessively and too early on sensitive developing plant tissue, so growers should not strive to eliminate rust from the hedgerow with repeated fungicide applications, but rather just limit it's spread to the upper foliage where flowering and fruiting is going on.

There are several fungicides mentioned for management of rusts in this article.  Before using any fungicides, check with your local Agricultural Commissioner's Office and consult product labels for current status of product registration, restrictions, and use information. 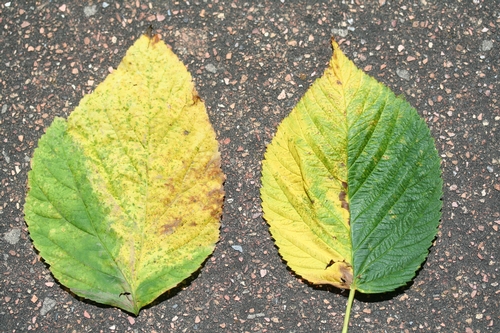 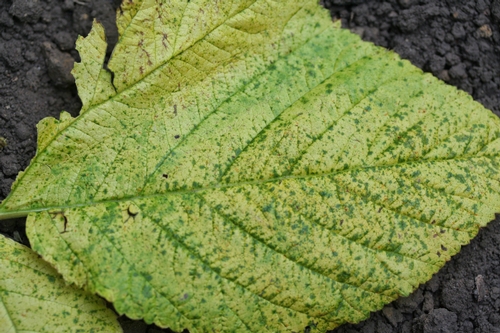 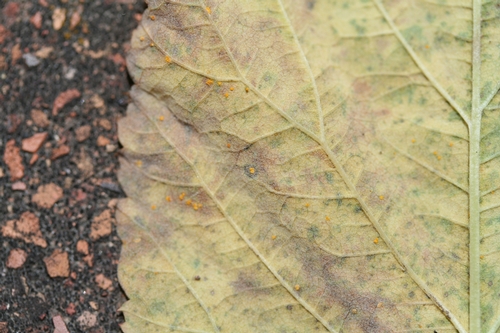 Yellow rust pustules on leaf underside. Note dark area around pustule in the middle of the picture. 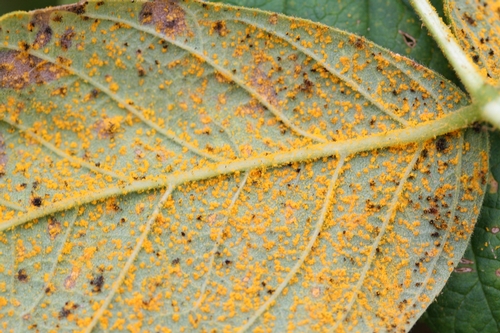 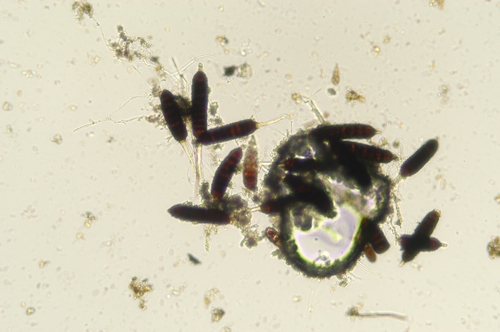 Photo courtesy Steven Koike, UCCE. Teliospores of Phragmidium rubi-idaei.
Tags: raspberry (24), yellow rust (2)
Comments: 2
Comments:
by Bryce Belgum
on February 24, 2016 at 12:01 PM
I am hearing about an increase in rust development in plantings early on after cutbacks, during this prolonged heat spell we are experiencing in Ventura County. This is the opposite of what we would expect since optimal weather conditions should be cool, humid.
Could heat/water stress be resulting in more favorable plants for the fungus, or is it more likely that the fungus itself is creating this appearance of stress?
by Mark Bolda
on March 17, 2016 at 4:31 PM
Hi Bryce,
Variety has a lot to do with it. The other thing is what the inoculum load is after the cutbacks - you have a lot of fresh growing material right up next to leaves which could carry the disease.
At any rate, I'd be a little concerned about getting this normally late disease this early in the game, and make some moves to mitigate it.
Mark
Leave a Reply: