On Friday, Aug. 26, he met with success. He spotted four within half an hour.

It all began with his stroll through the UC Davis Arboretum and Public Garden, "where construction at Wyatt Deck was finally completed and the paths have been reopened," he related in a group email.

"It was my first time there in about 3 weeks. As usual, I scoped out the big Asclepias speciosa clone and found...nothing." He then crossed over Arboretum Drive to the Environmental Horticultural gardens where he knew of another small clone of A. speciosa.  "By now it was 4:30 p.m. and the area was in dappled light and shade--and there were two brilliantly fresh-looking male monarchs chasing each other in the trees above the milkweed!"

"I looked over the plants for evidence of larval feeding and found absolutely none; I can't believe they were 'born' there despite being so brilliantly fresh-looking. I then walked west on Arboretum Drive, intending to turn north toward Mrak Hall, when an old, worn male monarch flew directly in front of me near eye level. It was now 4:50.

"As I went to turn toward Mrak (Hall) a fresh-looking one--sex undetermined--was cruising up in the trees near the bridge. I believe I saw four different individuals within half an hour. That's almost as many as I've seen in Davis all year."

Then, on Aug. 29, Shapiro ventured to north Davis where Professor Louie Yang of the UC Davis Department of Entomology and Nematology and collaborators had planted several dozen narrow-leaf milkweed, Asclepias fascicularis, several years ago for their research projects. "Nearly all the plants are in seed; I only found three still in bloom," Shapiro said. "And one had a beautiful, fresh-looking male monarch nectaring at it at 11.55 a.m. I didn't try inspecting all those plants but on casual inspection, I noted no evidence of larval feeding, nor pupae nor pupal exuviae."

Shapiro's colleague and former doctoral student Matt Forister, the McMinn Professor of Biology at the University of Nevada, Reno (UNR), alerted him to more good monarch news: "They're passing through Reno with increasing frequency.  I am personally seeing ~1 per day now.  All stopping for nectar, and heading your way, Art.  Looks like the production in the desert has been good." (See latest research by Forister and colleagues on "Milkweed Plants Bought at Nurseries May Expose Monarch Caterpillars to Harmful Pesticide Residues," published in the science journal Biological Conservation.)

As you may know, Shapiro has been studying the butterfly populations at 10 sites in Central California for 50 years and  maintains a research website, Art Shapiro's Butterfly Site, aka Art's Butterfly World.

"Art Shapiro began monitoring 10 transects in 1972 and has been conducting bi-weekly monitoring of those sites ever since. He also monitors an additional site as part of NABA's Seasonal Count Program! Art's program is the longest continually running butterfly monitoring project in the world, predating even the British Butterfly Monitoring Scheme."

Elsewhere in Davis, Bohart Museum of Entomology associate Greg Kareofelas has seen monarchs in his Davis backyard three times this year: May 6, May 11, and in early June. "A couple of days ago, in the Inner Coast Range, Glenn county I saw nine or ten adults and that many larvae." 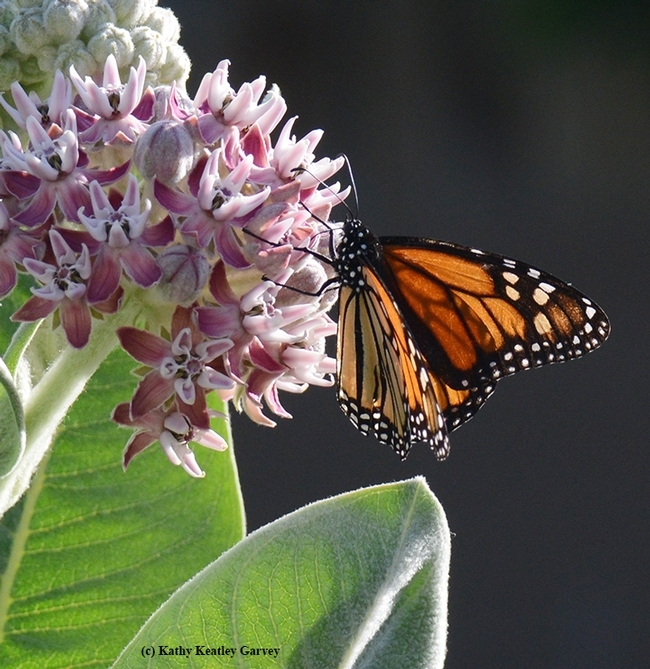 A monarch butterfly nectaring on a showy milkweed, Asclepias speciosa, in Vacaville, California in June, 2016. (Photo by Kathy Keatley Garvey) 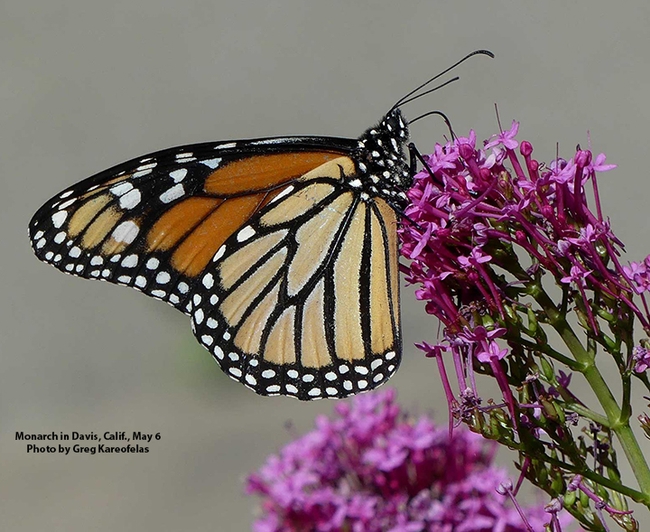 Bohart Museum of Entomology associate Greg Karoefelas took this image of a monarch in his backyard in Davis on May 6, 2022. (Photo courtesy of Greg Kareofelas)
Focus Area Tags: Environment, Natural Resources, Yard & Garden
Tags: Art Shapiro (268), Asclepias fascicularis (7), Asclepias speciosa (12), Greg Kareofelas (85), Louie Yang (21), monarchs (56), UC Davis (267), UC Davis Department of Entomology and Nematology (629)
Comments: 3
Comments:
by Dan Lewis
on September 2, 2022 at 8:34 AM
I’ve been seeing more Monarchs in the Southwest corner of Mendocino County the last few weeks than I have in a long time. That said, a recent article about pesticides in nursery milkweed was extremely saddening!
by Anne Schellman
on September 2, 2022 at 8:36 AM
I was in the arboretum this past weekend and saw one as well!
by Donna Glimstad
on September 3, 2022 at 12:00 PM
I've seen four Monarchs in our backyard here in Franklin, fluttering around our butterfly bushes and milkweed . . . the first I've seen here in 4+ years. I was SO excited!!
Leave a Reply: