That was the theme of the Bohart Museum of Entomology open house on Sunday afternoon, Nov. 6, and dragonflies do just that--they rule.

They don't just rule in the water as larvae and in the air as adults.

They ruled at the Bohart Museum open house as visitors examined the displayed specimens; admired the images in the displayed books and the slide presentations; and chatted with the dragonfly experts.

A sign, "Meet the Dragonfly Experts," greeted the more than 220 guests: A visitor at the open house takes an image of dragonfly specimens with her cell phone. (Photo by Kathy Keatley Garvey)
One Bohart Museum display featured “the largest dragonfly in the world," Petalura ingentissima," discovered by R. J. Tillyard in 1908 in North Queensland, Australia. The dragonfly's wingspan measures 160 mm or a little over 6.3 inches. Its species name is derived from the Latin word, ingens, meaning "huge."

Garrison told the crowd that "There are over 6300 species of dragonflies throughout the world. They are excellent fliers; they hunt by sight and seize their prey (other insects) on the wing. Their size ranges between 2 and 15 centimeters."

Other facts discussed about dragonflies included: Garrison's publications include descriptions of more than 75 new species and six new genera of Odonata. In the Americas, he has done entomological field work in the United States, Mexico, Costa Rica, Panama, Guyana, French Guiana, Venezuela, Ecuador, Peru, Brazil, Argentina and Chile. He has also collected dragonflies in Australia, Papua New Guinea, China, Thailand, Namibia and Iran.  One genus and 10 species of Odonates are named after him.

Christopher BeattyChristopher Beatty has been working "for a few years on petaltail dragonflies, with much of the work focused on the Black Petaltail (Tanypteryx hageni) in California and Oregon." Beatty was recently selected to present the prestigious Entomological Society of America's Founders' Memorial Lecture at the 2022 Joint Annual Meeting of the Entomological Societies of America, Canada, and British Columbia. He'll speak at the awards breakfast on Nov. 15 on  "The Passionate Observer: The Life and Times of Jean-Henri Fabre."  Fabre (1823-1915) was a French naturalist, entomologist, educator, and author.

Beatty said he has focused much of his entomological career studying the behavior and ecology of dragonflies and damselflies, having served in research and teaching positions at the University of Vigo (Spain), Santa Clara University, Cornell University, the University of Kiel (Germany), and Stanford University. He has authored or co-authored more than 25 peer-reviewed articles since 2003, and he is co-editor of the newly published Dragonflies & Damselflies: Model Organisms for Ecological and Evolutionary Research, 2nd Edition (Oxford University Press). The flameskimmer, Libellula saturata. (Photo by Kathy Keatley Garvey)
Andy Rehn
Andy Rehn is a stream ecologist studying benthic macroinvertebrates as part of bioassessments of bodies of water to ensure they are healthy and clean for drinking and recreation and can support diverse, native wildlife. He received his doctorate, studying dragonflies, at UC Davis in 2000.

Christofer Brothers
Cristofer Brothers is a fourth-year animal behavior doctoral student. He is researching how dragonflies, in both their nymph and adult stages, use their legs to capture prey. In particular, he studies the behavior of the flameskimmer, Libellula saturata. Brothers delivered a guest presentation on dragonfly predation behavior at the 2022 UC Davis Bio Boot Camp.

Greg Kareofelas
Greg Kareofelas credits Andy Rehn with inspiring him to study dragonflies. "That was when Andy was a doctoral student at UC Davis." Kareofelas, a longtime Bohart associate, naturalist and insect photographer,  assists at Bohart events and presents informational talks at the Bohart Museum lab meetings, among other venues. He most recently gave a presentation on dragonflies at the Nov. 4th lab meeting. His work includes providing images for the poster, "Dragonflies of California," available in the Bohart Museum gift shop. Entomologist Fran Keller,  a professor at Folsom Lake College and a UC Davis doctoral alumnus, designed the poster.

The Bohart Museum, founded in 1946, is located in Room 1124 of the Academic Surge Building, 455 Crocker Lane, UC Davis campus. Directed by Lynn Kimsey, UC Davis distinguished professor of entomology, it is the global home of eight million insect specimens, as well as the live "petting zoo" and an insect-themed gift shop stocked with t-shirts, hoodies, books, posters, jewelry, collecting equipment and more. Named for UC Davis professor and noted entomologist Richard Bohart, it is open to the public from 8 a.m. to noon, and 1 to 5 p.m., Mondays through Thursdays. 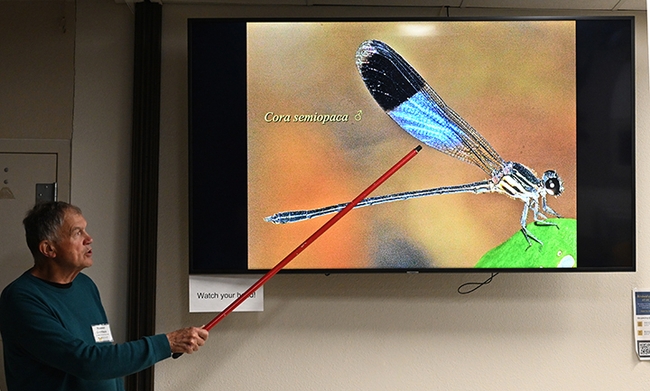 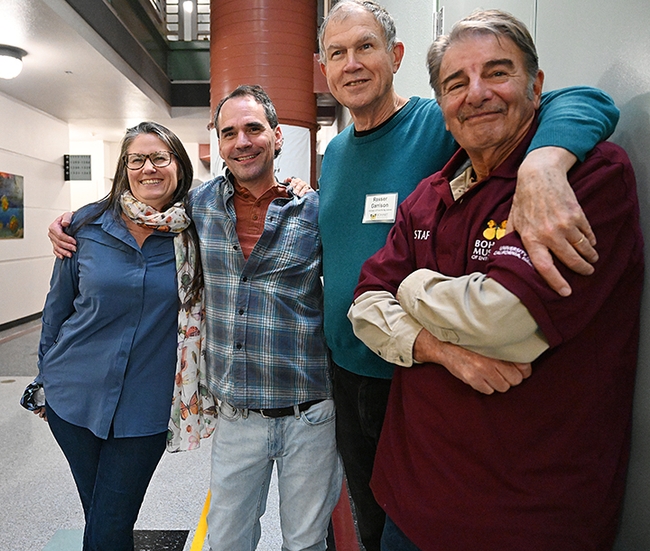 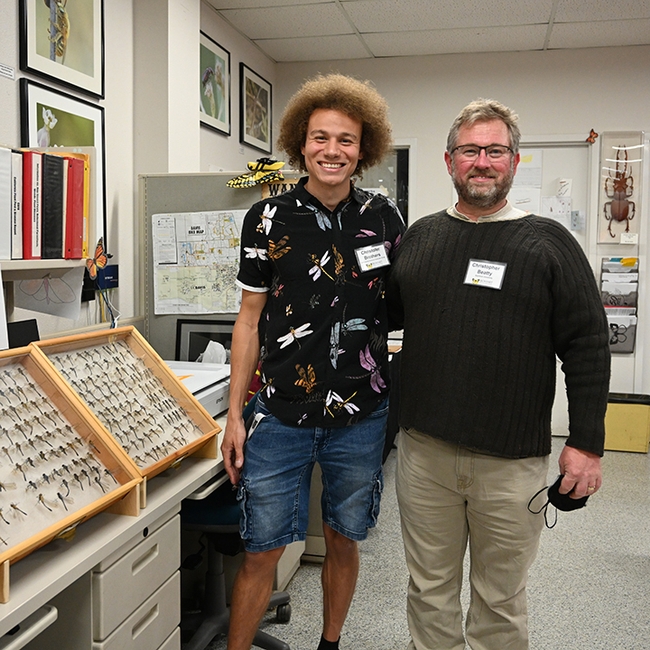 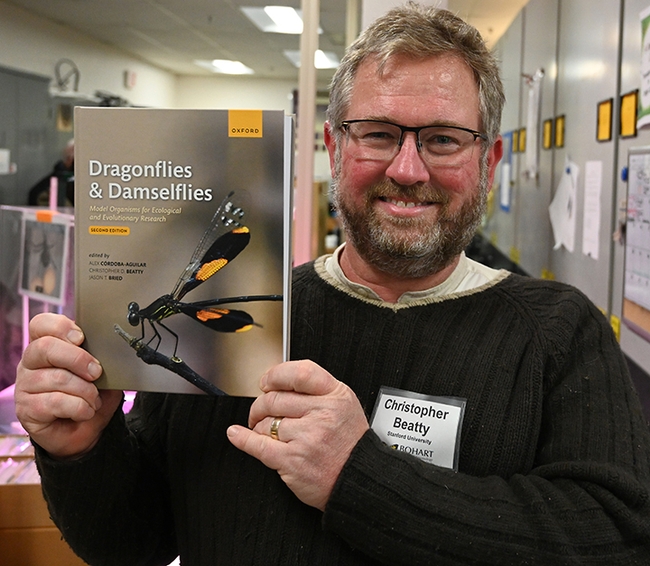 Christopher Beatty, a visiting scholar in the Program for Conservation Genomics at Stanford University, is a co-editor and co-author of this newly published book, "Dragonflies and Damselflies: Model Organisms for Ecological and Evolutionary Research," second edition. Fresh from the printers, it was among the dragonfly books displayed at the open house. (Photo by Kathy Keatley Garvey) 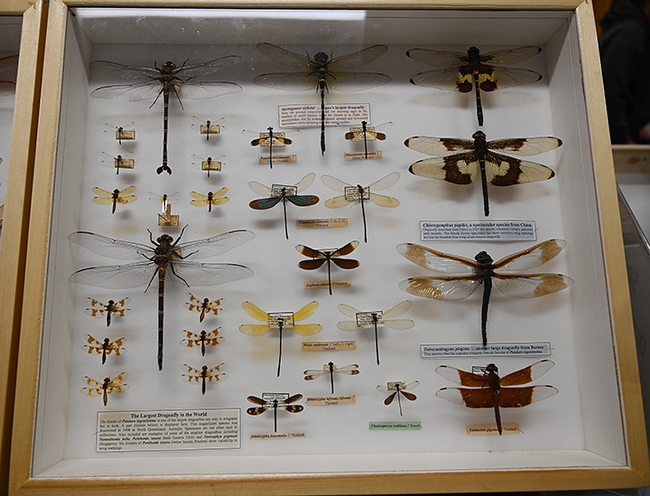 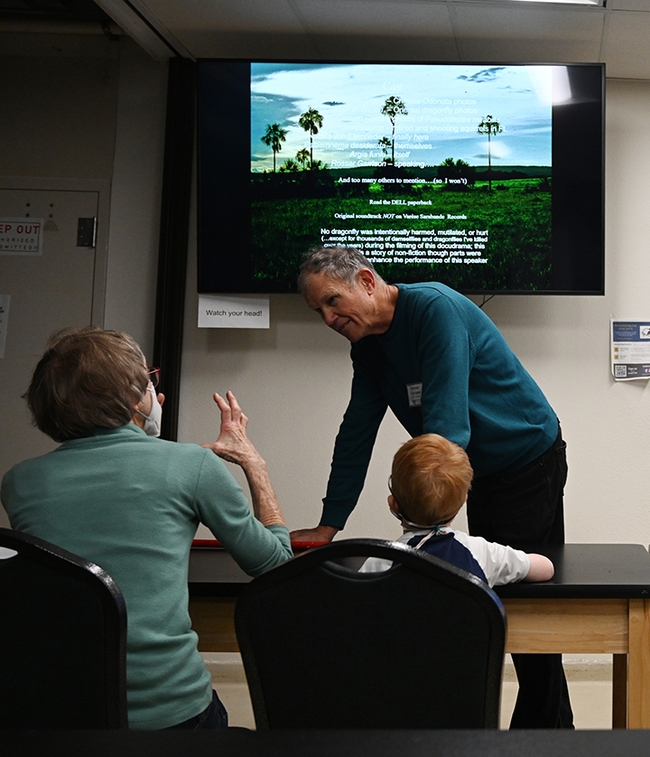 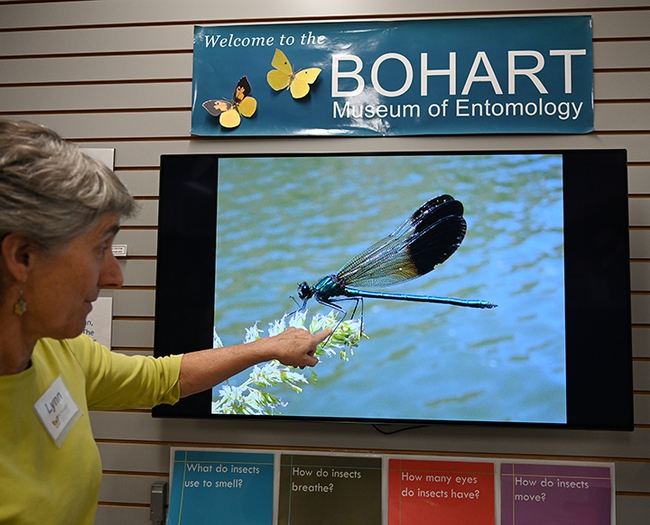