We have an upcoming " Worm Composting Made Easy"  Workshop on Saturday, September 8th 10 am - noon.. Register here

Worm composting is slow, but it's great for your plants~ It's worth it!

Q – I've heard it's possible to get good compost from worm manure.
Is this true?

A – Yes, you can let worms eat your kitchen scraps and convert it into fertilizer.  It's called vermiculture which is a fancy name for worm composting.  You need only a few things to get started: a worm bin, newspaper bedding, kitchen scraps and, of course, your little red wigglers.

The worm bin is an aerated container and will be lodging for your worm farm.  It may be made from a covered plastic tub, Styrofoam, metal, wood, or you can purchase a commercial worm bin.  Your bin will need holes in it for air circulation as well as holes along the bottom to drain excess moisture.

The composting worms most often used are Eisenia foetida, commonly known as red wigglers, and can be purchased at garden centers, bait shops or from suppliers on the Internet. This type of worm has adapted to living in decaying organic material, and they thrive in rotting vegetation.

You can create bedding for your bin with shredded paper such as non-glossy newspaper, office paper or cardboard.  Prepare your worm bedding by wetting the paper and wringing it out until it is like a damp sponge.  Fluff up the paper and bury some kitchen scraps in the worm bin.  Avoid food that contains yeast, onions, meats, oils, citrus or dairy.


The bin may be placed outdoors in a protected place but keeping it indoors works fine in harsh climates.  To keep your worms happy you need to think about temperature, moisture, and ventilation.  Add fresh kitchen scraps to the bin about twice a week, covering the newly deposited waste with an inch or two of bedding.

Bacteria and fungi exist in the worm bin and help break the food down. The end result will be vermicompost (worm castings), an excellent nutrient-rich food for growing healthy plants.  Worm compost is ready to use when it is dark in color and all the vegetation has been digested.  You will then harvest your worms and prepare some new bedding for another cycle.  Use your vermicompost to fertilize house plants or those in your garden.  An  for more information, there is a book called "Worms Eat My Garbage" by Mary Appelhoff. Calrecycle offers information online at: http://www.calrecycle.ca.gov/organics/worms/ 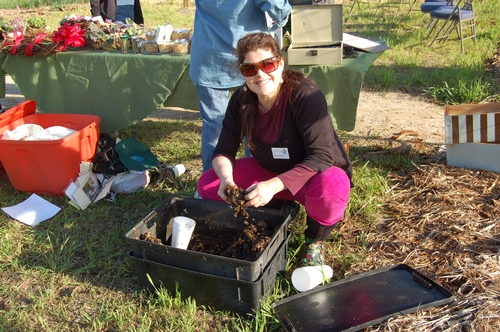 Tags: Master Gardeners (7), vermiculture (3), worm composting (2)
Comments: 1
Comments:
by teresa montano
on June 28, 2016 at 1:42 AM
Great writing - For what it's worth , if anyone needs a TN Multi-purpose Application Form , my wife used a blank version here https://goo.gl/VPyfc5.
Leave a Reply: