Thomas Scott
Don't ever underestimate the threat of dengue.

The mosquito-borne viral disease known as “breakbone fever,” is three times more prevalent than originally thought, according to a research paper published today in Nature and co-authored by dengue expert Thomas Scott of UC Davis.

In their research paper, titled “The Global Distribution and Burden of Dengue,” Scott and the 17 other team members estimated that 350 million people are infected each year--more than triple the World Health Organization’s current estimate of 50 to 100 million.

Professor Simon Hay of the University of Oxford led the research as part of the International Research Consortium on Dengue Risk Assessment, Management and Surveillance.

“Dengue takes an enormous toll on human health worldwide, with as many as 4 billion people at risk," said Scott, a UC Davis professor of entomology and worldwide expert on the epidemiology and prevention of dengue. He chairs the mosquito-borne disease modelling group in the Research and Policy for Infectious Disease Dynamics (RAPIDD) program of the Science and Technology Directory, Department of Homeland Security, Fogarty International Center, National Institutes of Health.

“The results of our study and infrastructure that created the dengue maps fill a critical gap in the battle against dengue,” said Scott, who maintains field research programs in Iquitos, Peru, and Khamphaeng Phet, Thailand.  “Prior to this, without rigorously derived dengue estimates that can be continuously updated, it was not possible to know with confidence where and when to direct interventions for greatest potential impact or to objectively assess the effectiveness of regional and global control efforts.  That kind of knowledge was among the most important missing information for developing enhanced dengue prevention programs.” Dengue mosquito, Aedes aegypti. (Photo courtesy of CDC)
“Although we knew that dengue is a growing problem, our results more precisely identify trends in different regions of the world, identify regions that merit greater attention, estimate the number of clinically apparent versus inapparent infections,” Scott said, “and we hope will the basis for increased discussion and research on the best ways to reverse this expanding public health threat.”

The highly infectious tropical and subtropical disease is spread by the bite of an infected female Aedes aegypti, a day-biting, limited flight-range mosquito that prefers human blood to develop its eggs. Dengue is caused by four distinct, but closely related, viruses. The most severe form of disease is life-threatening dengue hemorrhagic fever or DHF.

The researchers assembled known records of dengue occurrence worldwide and used a formal modelling framework to map the global distribution of dengue risk. They then paired the resulting risk map with detailed longitudinal information from dengue cohort studies and population surfaces to infer the public health burden of dengue in 2010.

“There are currently no licensed vaccines or specific therapeutics, and substantial vector control efforts have not stopped its rapid emergence and global spread,” the researchers wrote.

Dengue has now begun to appear along the southern border of the United States, including Texas. Florida has also reported cases of dengue.

Of the 96 million clinically apparent dengue infections, Asia bears 70 percent of the burden, the research paper revealed.  India alone accounts for around one-third of all infections. 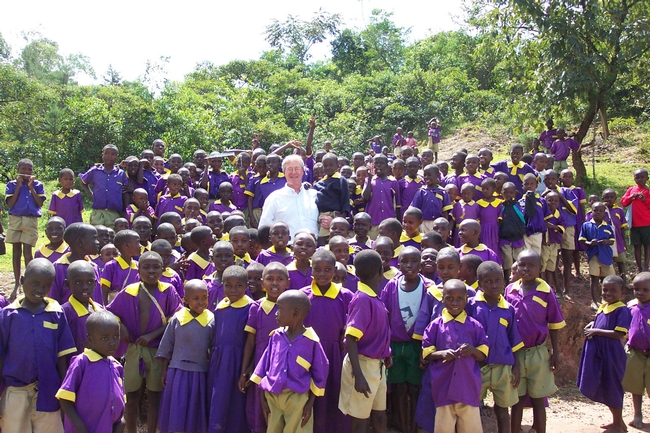 Professor Thomas Scott, a worldwide expert on dengue, is pictured in Kenya.

Global dengue risk. Areas in red indicate high risk for dengue occurrence while green areas indicate low risk. (Map courtesy of Jane Messina)
Tags: Aedes aegypti (30), dengue (12), Nature journal (7), Thomas Scott (15)
Comments: 4
Comments:
by Prof. D.-P. Häder
on March 8, 2015 at 4:12 AM
Good morning.
I would like to use the map of dengue distribution in a publication.
Could you give me permission for the reproduction?

With best regards, D. Häder
by Kathy Keatley Garvey
on March 11, 2015 at 10:05 AM
We sent your email over to Tom Scott, distinguished professor of entomology at UC Davis.
by Riyana Vatyani
on January 14, 2016 at 4:17 AM
Thank you for the info. Really an informative and helpful article. Will surely share this. Looking forward for more articles like this.
by Toni Gavello
on January 16, 2016 at 7:39 PM
Hello. I read your article about the no-seeums. While in Sanibel, Florida last September 2015, I was devoured by no-see-ums. About 10-15 days later, I developed a severe reaction to the bites. I forget what my doctor officially diagnosed me with, but basically, my body just went into overdrive to try and fend off the attack. I was quite sick and developed a large blistery rash that covered almost my entire back. It resembled shingles (which I was originally diagnosed with). Anyway,it it now January 2016, and I still have left over little red "blister" looking bumps, which flare up at least weekly and itch like crazy. So much so, that I will wake up at night itching away. Tonight, as I write this, is one of those nights, so I popped a benedryl to help calm things down. My question to you is, do you know how long these things will continue to itch? Will they ever go away?
I've had mosquito bites many times in my life, they itch, and then go away, However, this is ridiculous! I would say I have about 20 bites left over and scattered about my body. In case it helps, I am in my mid 50's, and female. I live in SoCal - we don't have those nasty things here! But we do have West Nile. So taking precaution where that is concerned. Thank you for your time.
Leave a Reply: