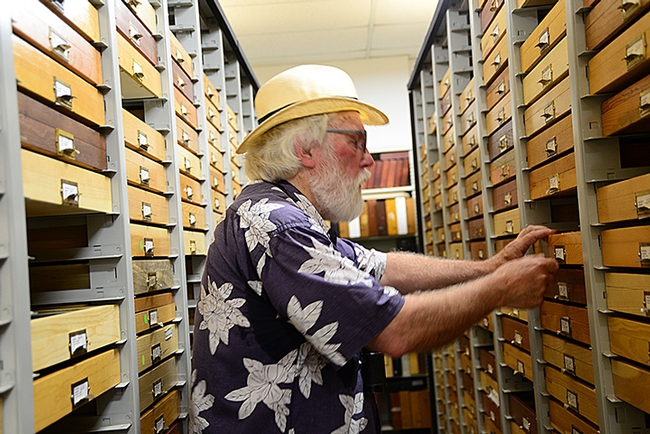 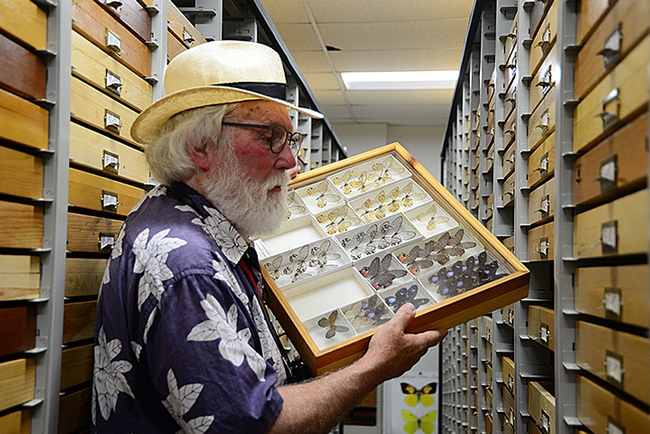 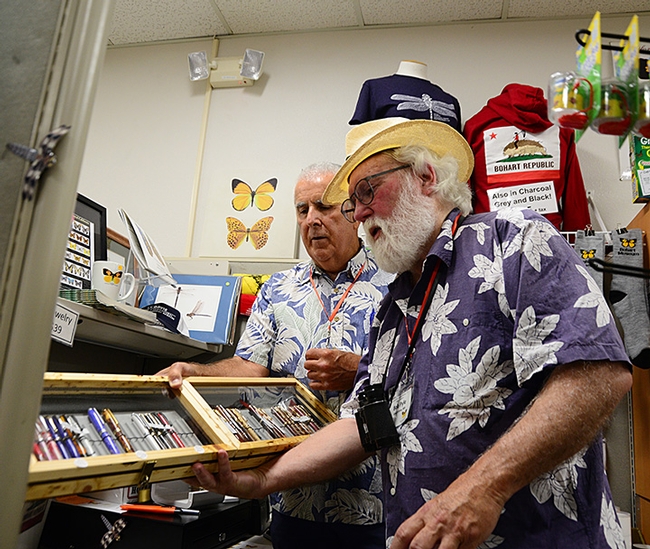 Society president Brian Scholtens, a professor at the College of Charleston, South Carolina, wears the conference t-shirt. (Photo by Kathy Keatley Garvey)
They are legends.

Two of those attending the four-day international Lepidopterists' Society conference held recently at the University of California, Davis, are as celebrated in Lepidoptera circles as the butterflies they study.

Robert Michael Pyle, a septuagenarian, and Paul Opler, an octogenarian, are international authorities on the insect order and share a love of science, teaching, and writing.

The two were among those who gathered at the Bohart Museum of Entomology during the Lepidopterists' Society conference. Lynn Kimsey, director of the Bohart Museum and a UC Davis professor of entomology, hosted two visits with several other Davis-based society members: retired research entomologist John De Benedictus; entomologist Jeff Smith, who curates the Bohart Museum's Lepidoptera collection; Bohart senior museum scientist Steve Heydon, and Bohart associate and naturalist Greg Kareofelas.

"This was our 68th annual meeting," said society president Brian Scholtens, a professor at the College of Charleston, South Carolina. "We have more than 1000 members worldwide."

This year's meeting, headquartered in the Independent Order of Odd Fellows Hall in downtown Davis, included two scientific gatherings at the Bohart Museum of Entomology.

The conference focused on the theme, "Insects in a Changing World Climate." "Attendees came from as far away as Finland to hear student and member speakers and to meet with their fellow Lepidopterists," said Smith. Marianne Horak of the Australian National Insect Collection received the prestigious Karl Jordan Medal, in absentia, at a banquet on the closing night.

Robert Michael Pyle
Robert Michael Pyle, a Yale-trained ecologist and a Guggenheim fellow,  is the founder of the Xerces Society for Invertebrate Conservation. He has authored 23 publications, including the comprehensive National Audubon Society Field Guide to North American Butterflies, a go-to reference source. Among his other insect-related books: Chasing Monarchs: Migrating with the Butterflies of Passage, which chronicles his 9,000-mile journey to discover the secrets of the monarchs' annual migration. For his book,  Mariposa Road: The First Butterfly Big Year, Pyle sought to track, firsthand, the 800 species of butterflies known in the United States. The book is a result of his 88,000 mile journey.

While at the Bohart Museum, Pyle delighted in examining the Magdalena specimens. This is one of the books displayed at the Lepidopterists' Society meeting. Author is Paul Opler; artist is Susan Strawn. (Photo by Kathy Keatley Garvey)
Paul Opler
Professor Paul Opler, attending with his wife, naturalist/writer/nature photographer Evi Buckner-Opler, is a special appointment professor at Colorado State University. He is best known for his research on insect host relationships of Lepidoptera and tropical ecology and his service as first editor of American Entomologist, published by the Entomological Society of America (ESA). A fellow of ESA and a prolific writer, he authored field guides to both eastern and western butterflies. He is also known for his contribution to Moths of Western North America, and his role as scientific editor of "Status and Trends of Our Nation's Biological Resources."

UC Berkeley Reunion
Three entomologists, trained directly or indirectly by Professor (now emeritus) Jerry Powell of UC Berkeley reunited at the Bohart gathering:   Dan Rubinoff, professor of entomology and director of the University of Hawaii Insect Museum, Honolulu; "Moth Man" John De Benedictus, retired UC Davis research entomologist; and Paul Opler, who retired from the U.S. Fish and Wildlife Service as the first entomologist in the Endangered Species Program and then accepted a special appointment professor in the Department of Bioagricultural Sciences at Colorado State University.

At the Bohart gathering, director Lynn Kimsey gifted the attendees with a copy of the museum's innovative calendar featuring humorous sentences she collected from students in her classroom. UC Davis entomology student/artist Karissa Merritt illustrated the calendar.

The Bohart Museum, located in Room 1124 of the Academic Surge Building on Crocker Lane, is the home of nearly eight million insect specimens and the California Insect Survey. They're used as an "insect library" or references during identifications. They're also a permanent record of insect species' distribution in time and space.

In addition, the Bohart Museum houses a gift shop and a live "petting zoo," comprised of Madagascar hissing cockroaches, walking sticks and tarantulas.

More information is available on the website or by contacting bmuseum@ucdavis.edu or (530) 753-0493. 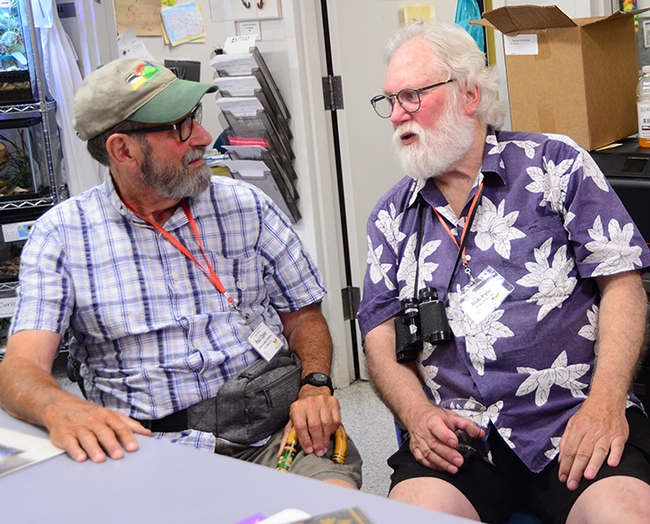 Legendary Lepidopterists Paul Opler (left), an octogenarian, and Robert Michael Pyle, a septuagenarian, chat during their visit to the Bohart Museum of Entomology. It was part of the Lepidopterists' Society's 68th annual conference. (Photo by Kathy Keatley Garvey) 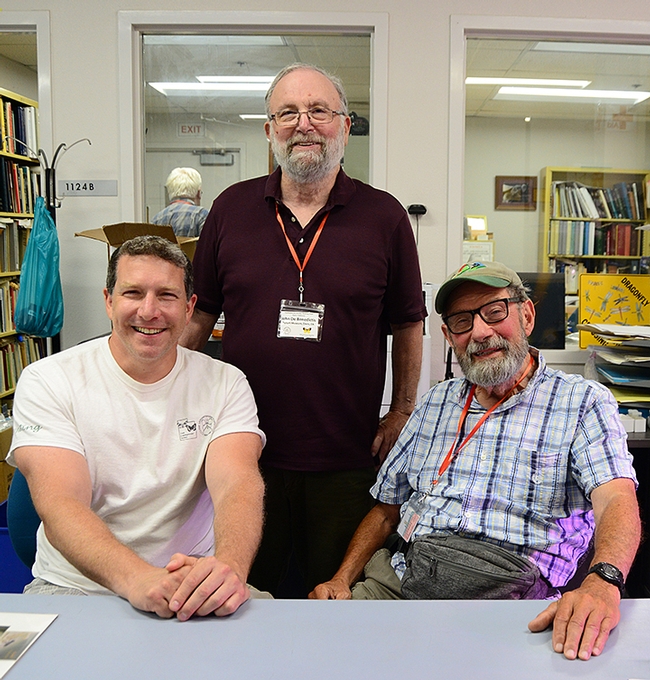 These three entomologists were trained directly or indirectly by Jerry Powell of UC Berkeley. From left are Dan Rubinoff, John De Benedictus, and Paul Opler. (Photo by Kathy Keatley Garvey) 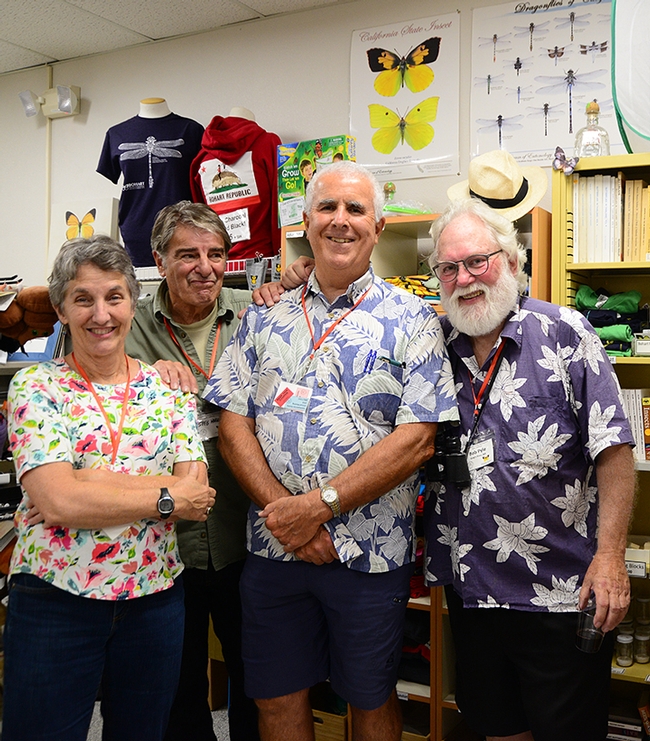 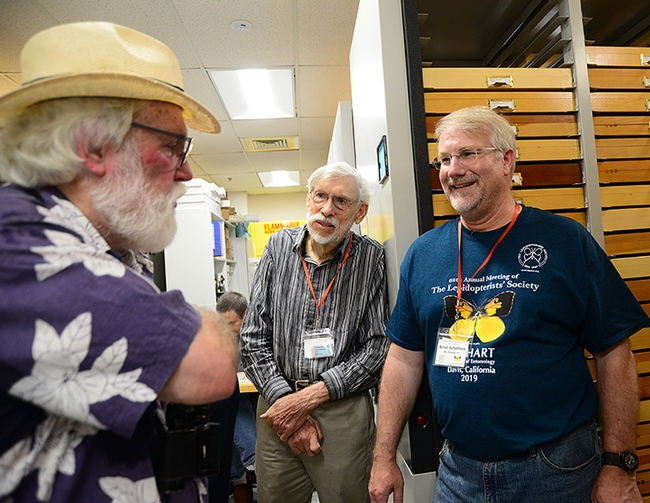 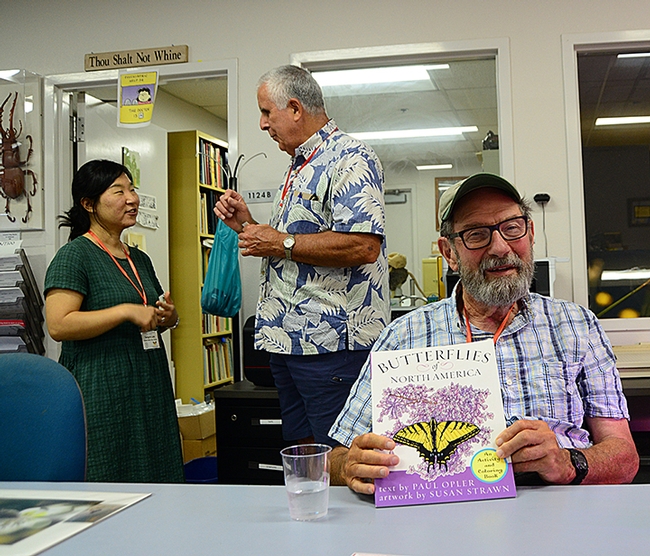 Professor Paul Opler (foreground) is the author of "Butterflies of North America." In back, Jeff Smith, curator of the Lepidoptera collection at the Bohart Museum, chats with Sangmi Lee of Arizona State University. (Photo by Kathy Keatley Garvey) 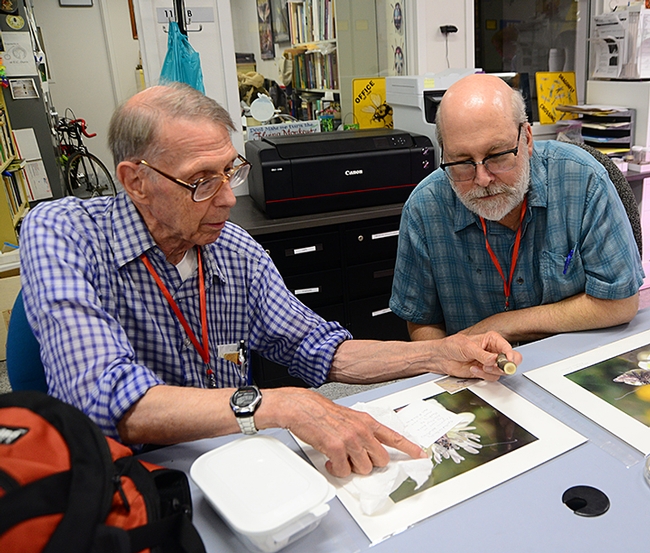 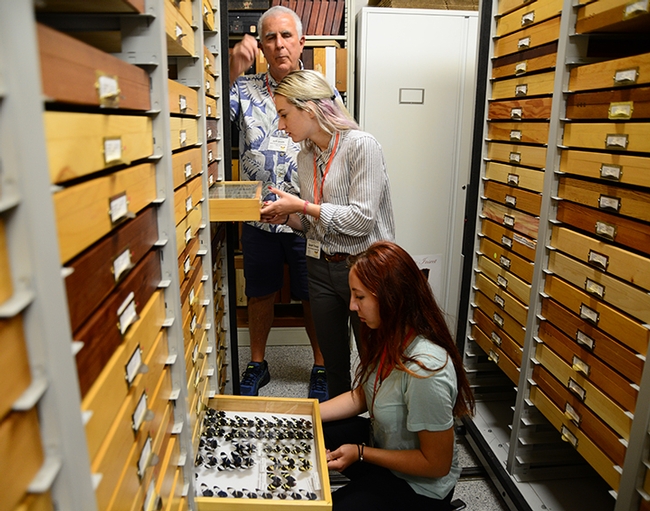 Entomologist Jeff Smith, curator of the Bohart Museum's Lepidoptera collection, explains specimens to Sarah Troup (back) and Shannon Summers, both of the University of Florida, Gainseville. He also served as one of the conference hosts. (Photo by Kathy Keatley Garvey) 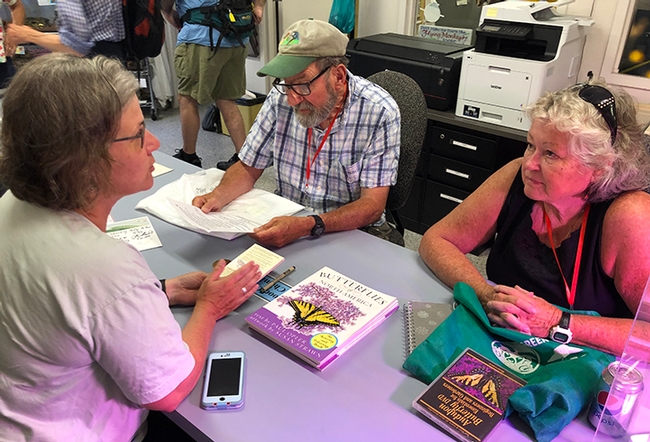 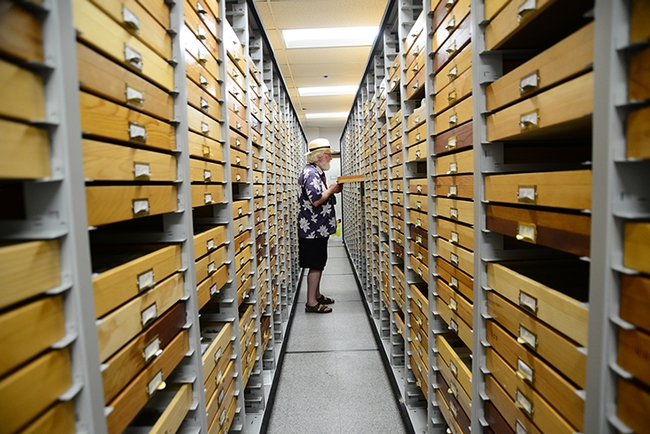 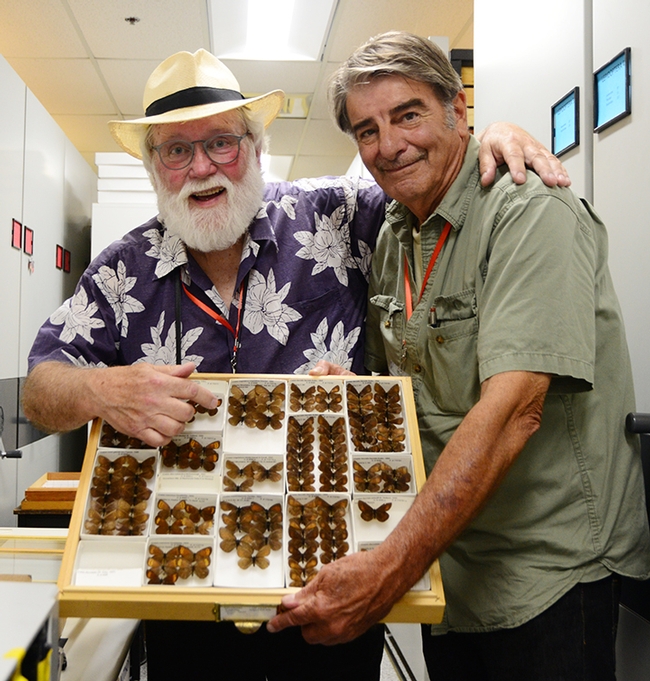