Another casualty of the coronavirus pandemic: the annual California Honey Festival, which was scheduled May 2 in historic downtown Woodland.

This year would have been the fourth annual.

But, of course, and rightfully so, the cancellation is for our protection. It needed “not to happen.”

The California Honey Festivalevent, launched in 2017 and sponsored by the City of Woodland and the UC Davis Honey and Pollination Center, is an all-day, free festival that usually draws a crowd of some 30,000.

The event aims to cultivate an interest in beekeeping, and to educate the public in support of bees and their keepers, according to Amina Harris, director of the UC Davis Honey and Pollination Center.  Through lectures and demonstrations, the festival-goers learn about bees and how to keep them healthy.  Major issues facing the bees include pests, pesticides, diseases, malnutrition, and climate changes.

Yes, those major issues still face the bees. But now we humans face a major issue of our own: a deadly virus. We are sheltering-in and social distancing. Bees are social insects and are out foraging for nectar, pollen, propolis and water.  Their colony is one huge superorganism, with a queen bee, workers and drones. They all depend on one another to make the hive run smoothly. No queen bee, no colony. No workers, no colony. No drones, no colony.

As of 4:30 p.m. today, Covid-19 has infected more than 1.9 million people, and sadly, more than 118,000 people worldwide have perished, according to Johns Hopkins University. Reportedly, the United States is “nearing the peak right now.”

Stay safe out there! 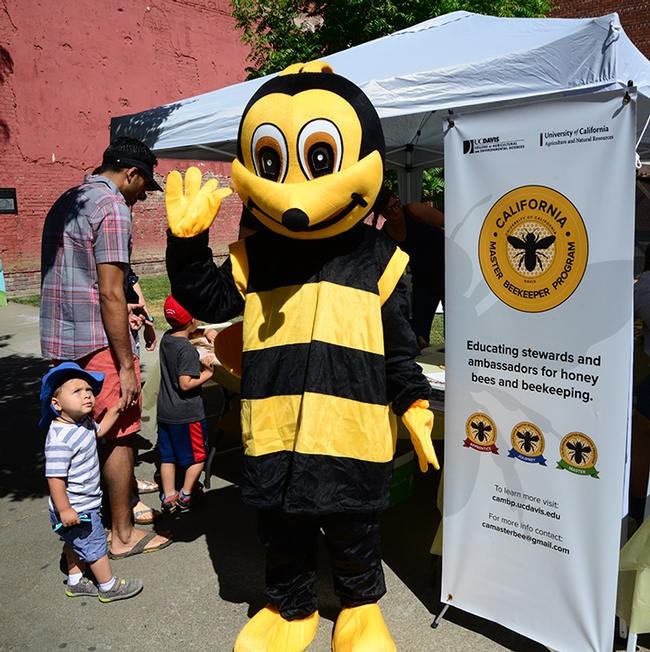 Miss Honey Bee (Wendy Mather, program manager of the California Master Beekeeper Program) waves at the crowd at the 2019 California Honey Festival, while a curious youngster wonders what this is all about. (Photo by Kathy Keatley Garvey) 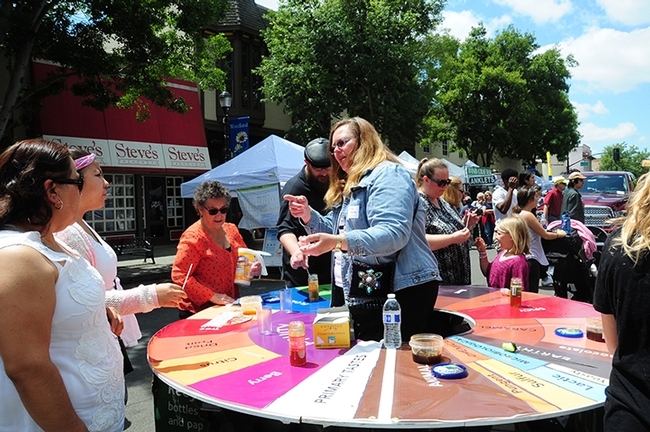 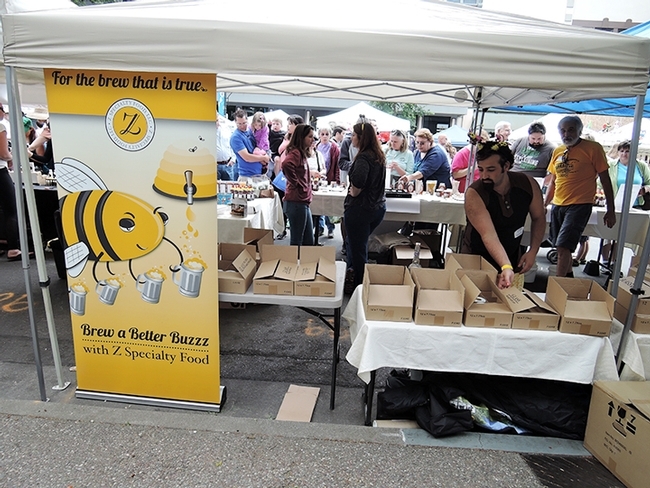 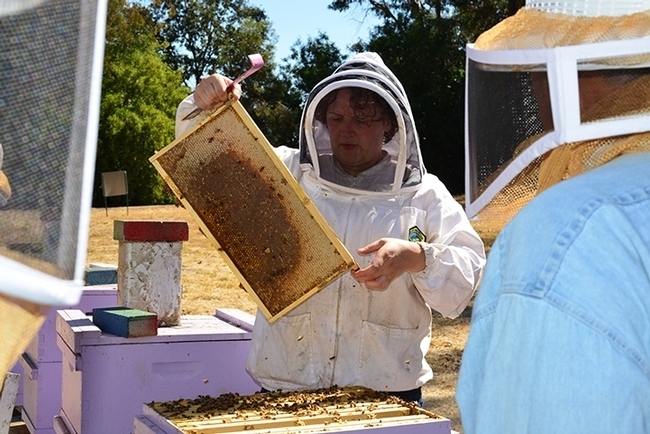 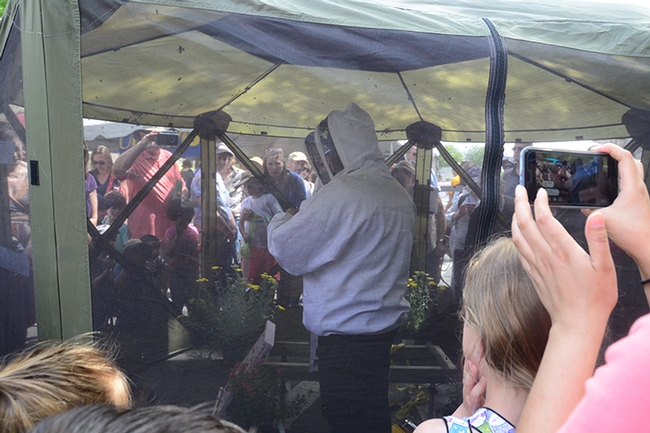 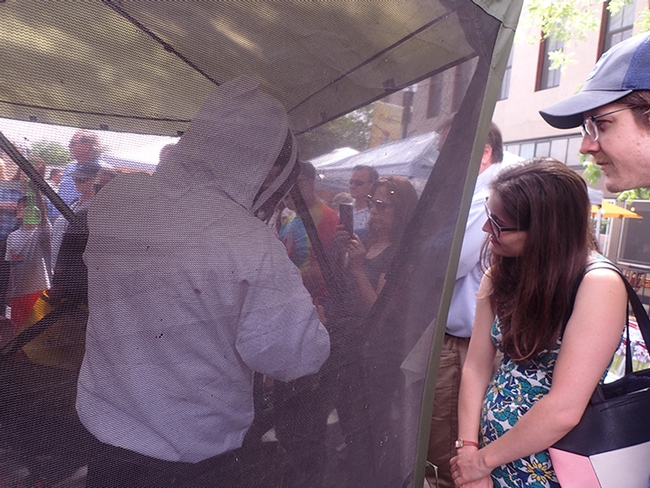 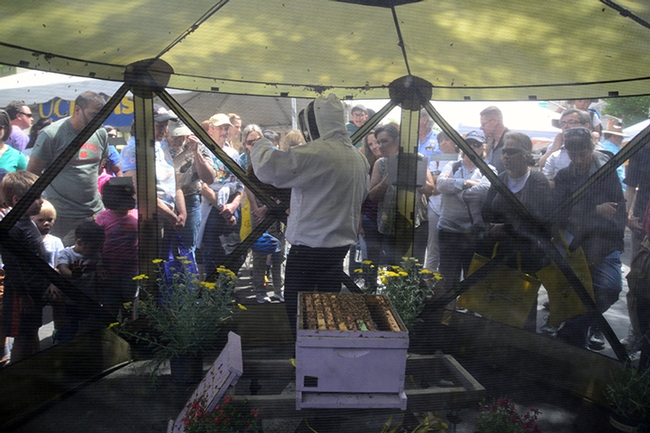 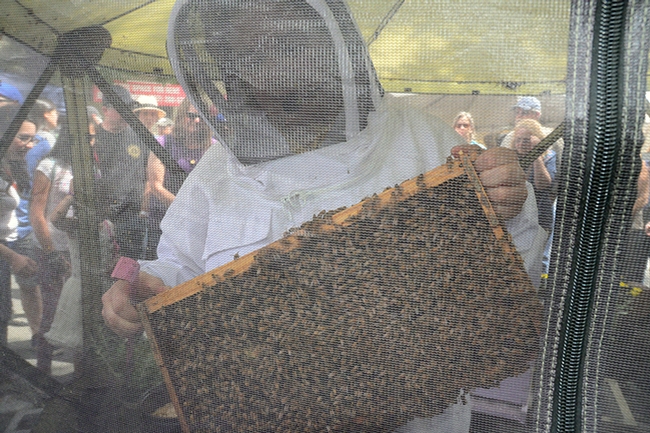 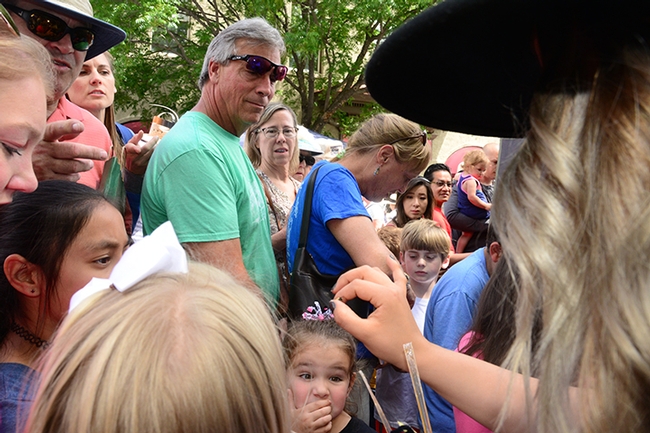 Longtime beekeeper Gene Brandi of Los Banos, president of the American Beekeeping Federation, will present two talks at the California Honey Festival: one at 10:30 and the second at 1 p.m. (Photo by Kathy Keatley Garvey)
It promises to be...oh, so sweet!

The inaugural California Honey Festival, to take place from 10 a.m. to 5 p.m., Saturday, May 6 on a four-block stretch in historic downtown Woodland, will draw folks from all over state and beyond. And it's free and open to the public.

At the Honey Lab, located in the UC Davis booth, members of the UC Davis Master Beekeeper Program and knowlegeable volunteers will teach festival-goers about "all things honey."

Some of the activities at the Honey Lab booth:

"The California Honey Festival's mission is to promote honey, honey bees and their products, and beekeeping through this unique educational platform, to the broader public," said Harris. "Through lectures and demonstrations, the festival will help develop an interest in beekeeping by the younger generation. Attendees will learn about the myriad of issues that confront honey bees including pesticide use, diseases and even the weather! In addition, attendees can learn how to creatively plant their gardens to help feed all of our pollinators. It is important for the community to appreciate and understand the importance of bees as the lead pollinator of many of our crops adding to the food diversity we have come to enjoy." Honey bee finds a sweet spot on a leaf. (Photo by Kathy Keatley Garvey)
One of the speakers is longtime beekeeper Gene Brandi of Los Banos, president of the American Beekeeping Federation, who will speak on the Beekeeping Stage from 10:30 to 11 a.m., and again from 1 to 1:45. Brandi  began working with bees in the early 1970s while attending California Polytechnic Institute (Cal Poly) at San Luis Obispo. After graduation, he began working the bees full time, starting his own business in 1978 and building it up to 2000 colonies.

Brandi, who spoke at a 2015 symposium at UC Davis, said that the major issues that negatively impact colonies include pesticides, varroa mites, nutritional issues and diseases. "It's much more difficult to keep bees alive and healthy today than it was in the 1970s," he told his audience. "I had a 5 percent winter loss in the 1970s, and a 13 to 45 percent winter loss in his operation during the past 10 years."

Among the many other speakers: Extension apiculturist Elina Niño, booked from 11 to 11:45 a.m. and from 2 to 2:45 p.m., and Billy Synk, director of pollination programs for Project Apis m., and former manager of the Harry H. Laidlaw Honey Bee Facility at UC Davis. Sync speaks from 12 to 12:45.

Expect lots of honey--which has been described as "the soul of a field of flowers." 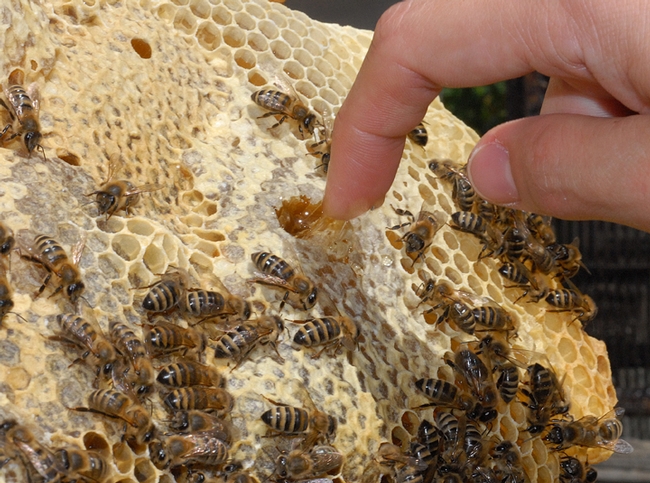 A taste of honey. From the comb to the bottle, that's the route of honey to the California Honey Festival on Saturday, May 6. (Photo by Kath 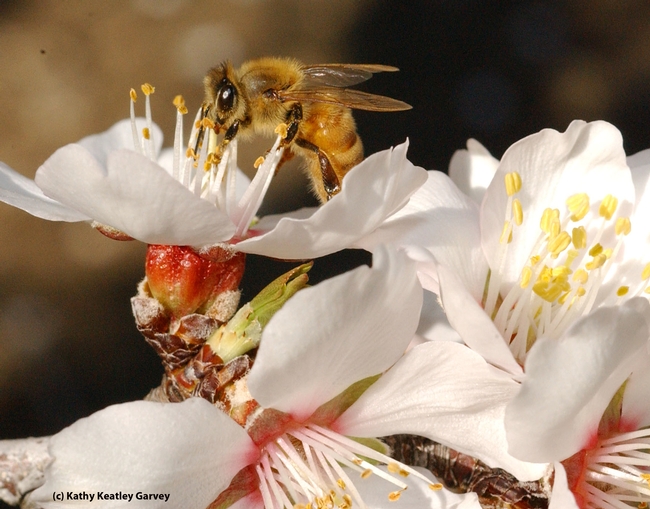