Gently touching the male Valley carpenter bee, Xylocopa varipuncta, aka "the teddy bear" bee.
It was a big butterfly-and-bee day at the Bohart. UC Master Gardener Tece Markel of Newcastle shows a photo of a male Valley carpenter bee to Robbin Thorp, distinguished emeritus professor of entomology, holding a live example. With her are grandchildren Fiona, 5, and Declan McManus, 7, of Rocklin.
The poster, the work of Tabatha Yang (with photos by yours truly), pointed out that monarch caterpillars eat only milkweed (genus Asclepias); gulf fritillary caterpillars eat only passionflower vine (genus Passiflora), and pipevine swallowtail caterpillars dine on the pipevine plant (family Aristolochiaceae).

Jeff Smith kept busy showing visitors the drawers of butterfly specimens, including blue morphos, monarchs and swallowtails. As he opened one drawer, he explained that "this drawer contains several species of South American rainforest butterflies, Preponas, in the genus Archaeoprepona." He described them as "extremely strong and fast fliers, but they love to settle on baits such as fermenting fruit on the ground. We (Bohart team) caught several in the ongoing Belize biodiversity work this past year." Close-up of the family arts and crafts activity--making wiggling caterpillars. These are the hands of Brownie Girl Scouts, from Troop 1585, Oak Grove.
A family craft activity featured "wiggling caterpillars," made with with straw and paper. The youths also held Madagascar hissing cockroaches and walking sticks. A popular attraction was the "monarch starter set"--a zippered, meshed butterfly habitat and a bottle for water and milkweed stems: just add monarch caterpillars.
The Bohart gave away Patrón tequila bottles, donated by TJ's Tavern of Vacaville, for the "monarch starter set," which includes a zippered, meshed butterfly habitat (available for purchase at the Bohart gift shop and elsewhere) and a Patrón bottle.  The bottle is filled with water and milkweed cuttings and "just add monarch caterpillars." The bottles, embedded with a bee logo, are favored because they're sturdy with a broad base (so they won't tip over) and a narrow neck (so caterpillars can't fall in and drown).

The bottle is tucked inside a zipped, meshed butterfly habitat and placed indoors or in a screened patio to prevent tachinid flies and wasps from laying their eggs in the caterpillars or chrysalids. Once the monarchs pupate and eclose, they are released to start another generation. This is a small-scale conservation project. The Bohart Museum's regular hours are from 9 a.m. to noon and 1 to 5 p.m. Mondays through Thursdays. The museum is closed to the public on Fridays, Saturdays and Sundays and on major holidays. Admission is free. Special open houses take place throughout the academic year. The next open house takes place during the annual campuswide Picnic Day on April 22. 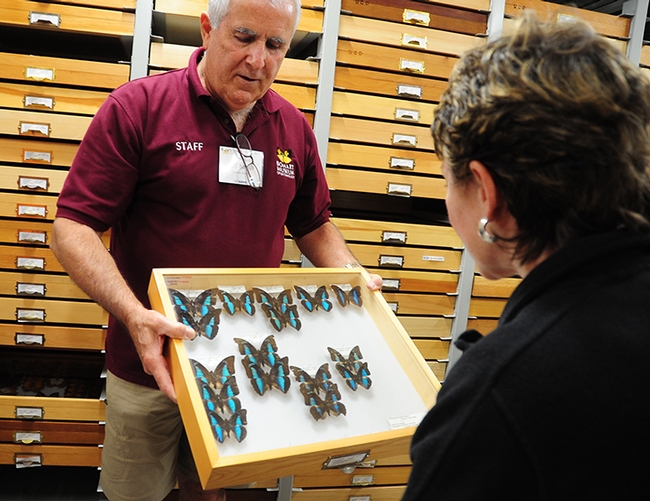 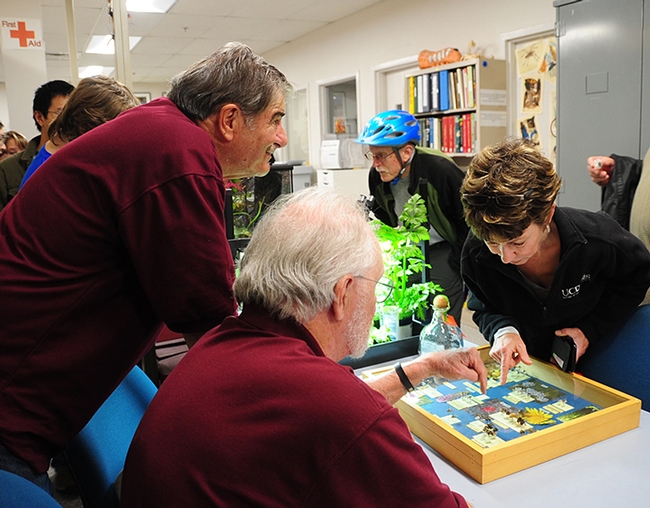 Davis resident Ria deGrassi talks about finding an unusual bee in her yard. At left are Robbin Thorp (foreground), UC Davis distinguished emeritus professor of entomology, and Bohart associate Greg Kareofelas (next to him). 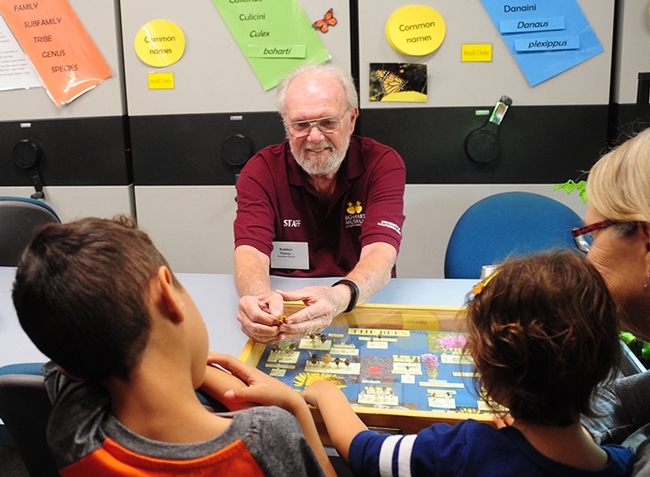 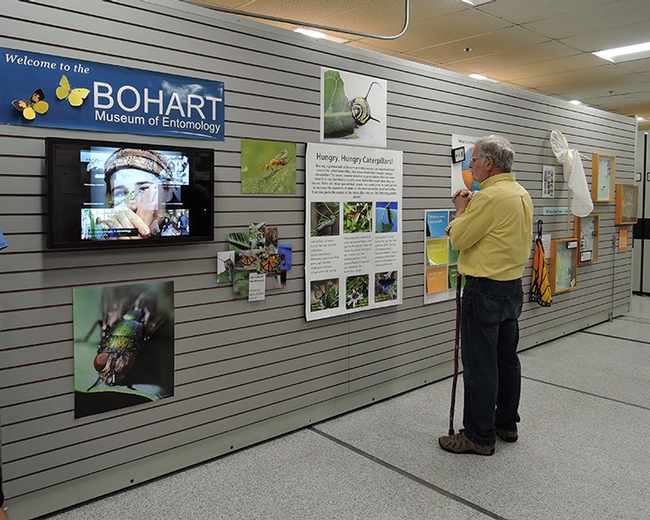 She's only 11 years old, but already she's interested in butterflies.

Selah Deuz of the Sherwood Forest 4-H Club, Vallejo, entered her display on "How to Create a Butterfly Garden" at the recent Solano County 4-H Project Skills Day, where youths share what they've learned in their projects and gain experience in honing their presentation skills.

"Would you like to add some excitement to your garden?" she asked. "How about butterflies? Butterflies are attracted to specific plants."

Who knows? She may turn out to be another butterfly guru like Art Shapiro, distinguished professor of evolution and ecology at UC Davis who has studied butterflies for more than four decades and maintains a website on his research.

Meanwhile, if you're interested in gardening for butterflies, mark your calendar. The Bohart Museum of Entomology at UC Davis has scheduled an open house for Sunday, March 19 on “Eggs to Wings: Backyard Butterfly Gardening.” The event, free and open to the public, will take place from 1 to 4 p.m. in the museum, located in Room 1124 of the Academic Surge Building on Crocker Lane.

We're in the throes of winter, but spring is rapidly approaching: March 20. 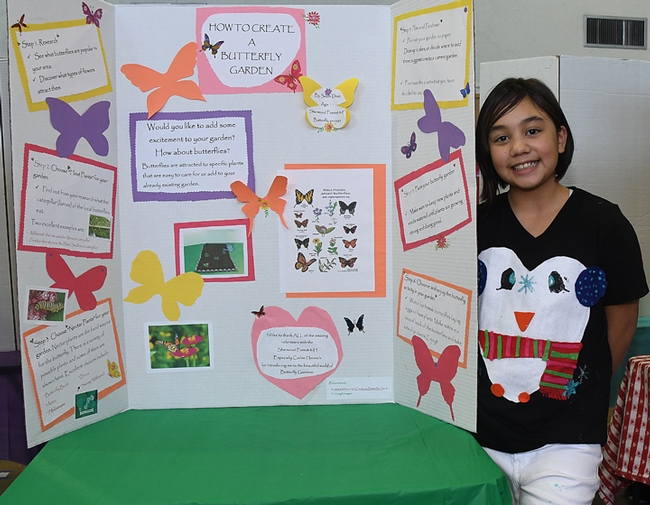 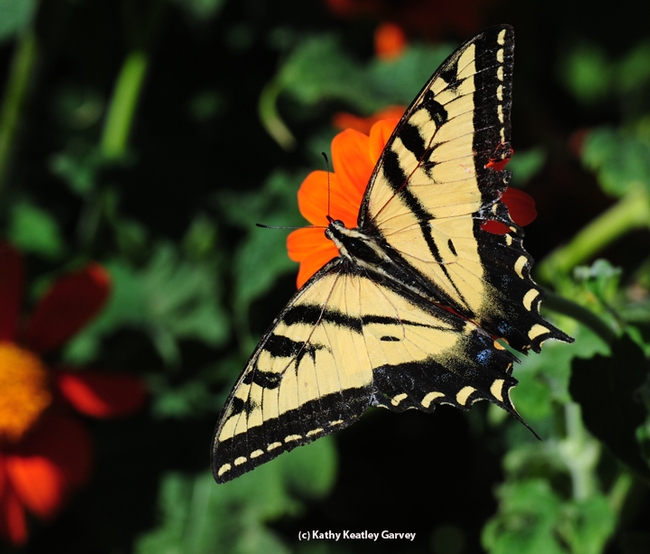 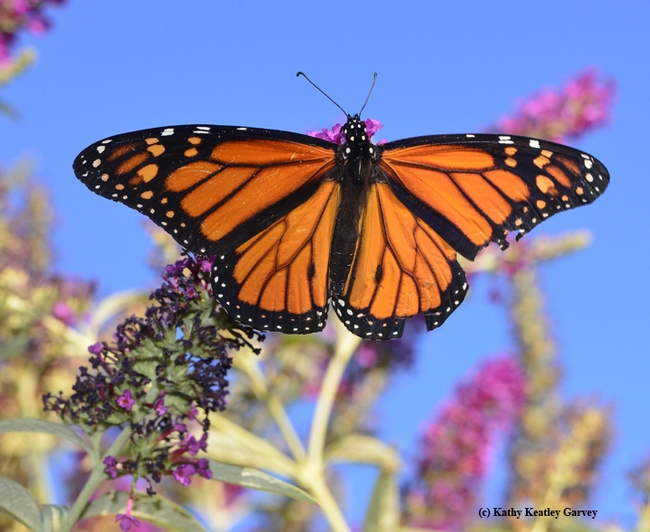 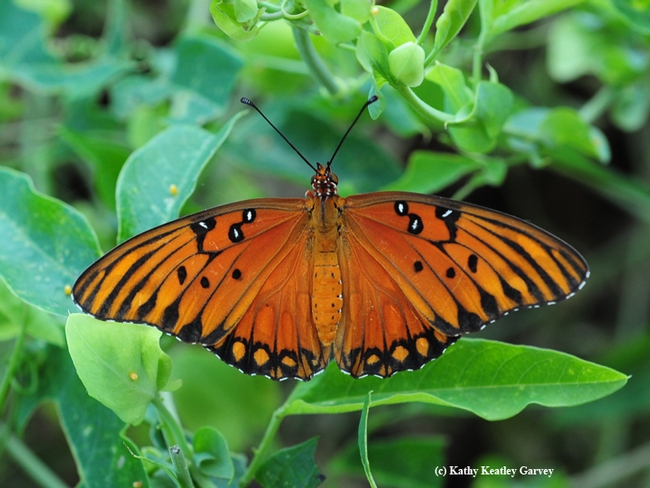