Bug Squad
sitenum=63
Happenings in the insect world
Once Upon a Monarch...

She was eating. That's what monarch caterpillars do best. They eat. A lot.

How could I have missed her? This one was a fifth in-star and almost ready to pupate.

The chubby black, yellow and white monarch caterpillar kept eating. "YOU could have been eaten, little buddy," I told her, glancing at the hungry California scrub jays vocalizing in the cherry laurels. True, milkweed contains a poisonous toxin that protects monarchs from predators, but birds do eat them. "Just not as much," says Louie Yang, associate professor of entomology at the University of California, Davis.

Then there are the other deadly encounters. Tachinid flies and braconid wasps parasitize the caterpillars and chrysalids. And some fall victim to that dreaded disease, Ophryocystis elektroscirrha, caused by an obligate, protozoan parasite.

Give her a chance, just a chance...

So, awed by her unexpected appearance, we prepared the indoor butterfly habitat for its last tenant of the season. Our monarch-rearing kit features a Patron tequila bottle; the narrow neck prevents the 'cats from drowning, and the broad, heavy base assures stability (this is one bottle that doesn't get tipsy!). Just add water, milkweed stems and the caterpillar, and center the bottle in the zippered habitat. Then you wait for the caterpillar to create a silk button and form a J. And then a chrysalis. And then an adult ready to generate more generations.

This November tenant, however, chose the most fragile, overhanging milkweed stem in the bottle to pupate. No mesh ceiling for her!

When the jade-green chrysalis formed on Nov. 4, it looked like a jeweled ornament dangling from a Christmas tree. Or a mid-life chrysalis.

On Day 19, Nov. 22 (the day before Thanksgiving), the chrysalis darkened, revealing the orange, black and white wings in all its transparency. The chrysalis bulged, throbbed and swayed. Out slipped the butterfly, wings flat, wings pumping.  She clung to the pupal case as her wings expanded. A big, strong and healthy girl.

On Thanksgiving Day,  four adults, two dogs and one butterfly celebrated in Casa de la Garvey. At least we think the butterfly celebrated. She dropped to the floor of her habitat and sipped orange juice and a honey/water mixture. Then, sustained, she fluttered up to her perch, and began searching for an opening, an escape.

Hmm...No way would she be able to fly three hours to the overwintering site in Santa Cruz in the cold and rain. And then there are those hungry California scrub jays hanging out in the cherry laurels...Just waiting...

It just so happened that a friend and pollinator advocate, Rita LeRoy, the self-described "farm keeper" at the Vallejo School District's Loma Vista Farm, Vallejo, was heading to Santa Cruz on Friday, the day after Thanksgiving, to show her out-of-town relatives the overwintering migratory butterfly sanctuary at the Natural Bridges State Beach Park.  That's about a 100-mile trip from Vallejo.

Could Ms. Monarch hitch a ride?

She could. And she did.

Rita, who delights in showing area schoolchildren the monarchs that frequent Loma Vista Farm--she's also a Monarch Mom who rears and releases monarchs and is active in the Bay Area Pollinator Posse--unzipped the mesh habitat at the butterfly sanctuary.

Her sister-in-law captured an image of Miss Monarch in freedom's hands.

Wow! Just wow! From a caterpillar to a chrysalis to an adult. And there she was! In Rita's hands. In Santa Cruz. In the migratory butterfly sanctuary. With her buddies. Or soon-to-be buddies.

"She flew so fast that we didn't get a picture of her flying away," Rita lamented. "She was anxious to join her new friends."

"It was a beautiful day," Rita said, adding "Thank you for allowing me the pleasure of setting her free. I was so sad that my last ones (monarchs) didn't survive. It was really nice to have this happy experience."

Once upon a monarch...thanks to Rita, the ending could not have been better... 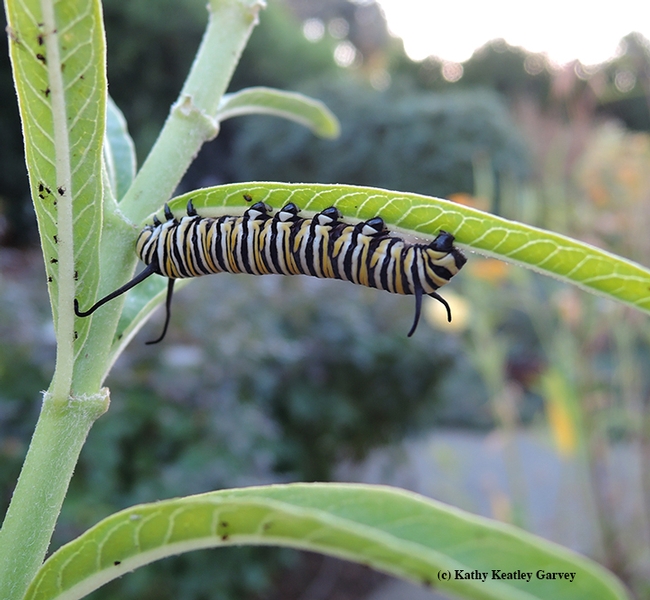 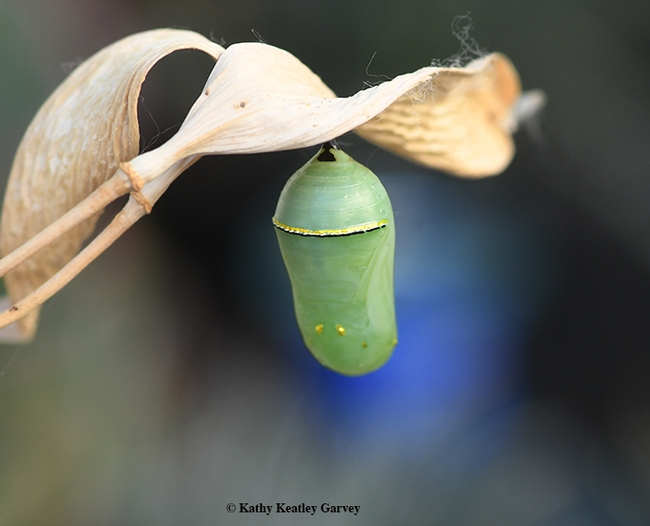 The monarch caterpillar, found Oct. 27 on milkweed in Vacaville, Calif., formed this chrysalis on Nov. 4. (Photo by Kathy Keatley Garvey) 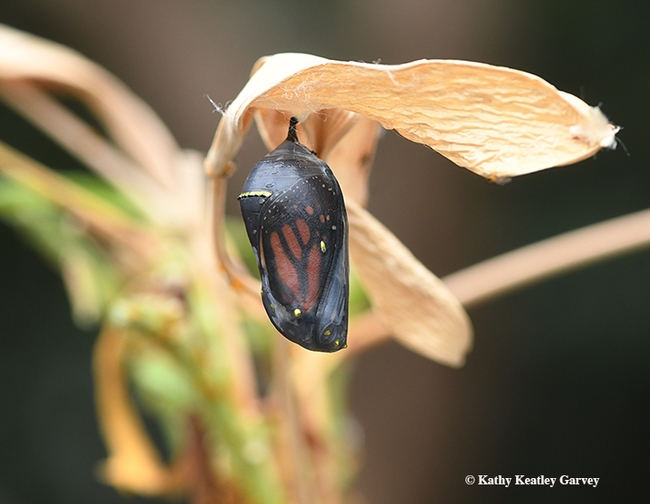 On Nov. 22, the chrysalis darkened, revealing the iconic orange, black and white wings of the monarch in all its transparency. (Photo by Kathy Keatley Garvey) 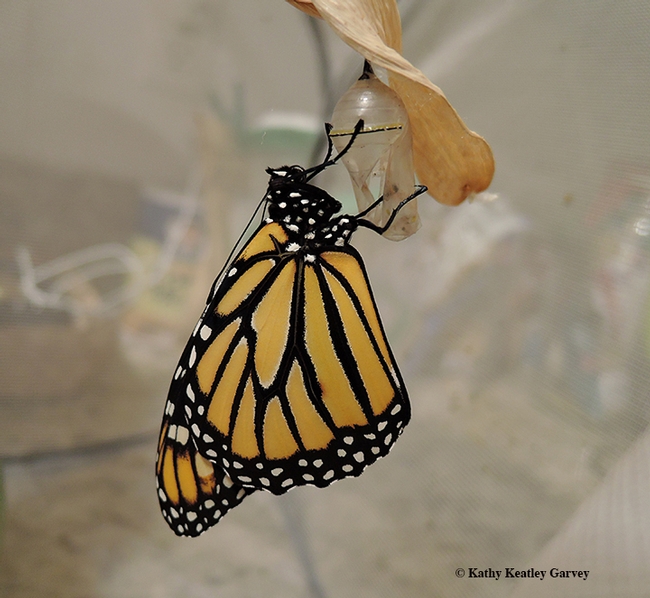 On Nov. 22, the monarch eclosed. It's a girl! Here she clings to her pupal case. (Photo by Kathy Keatley Garvey) 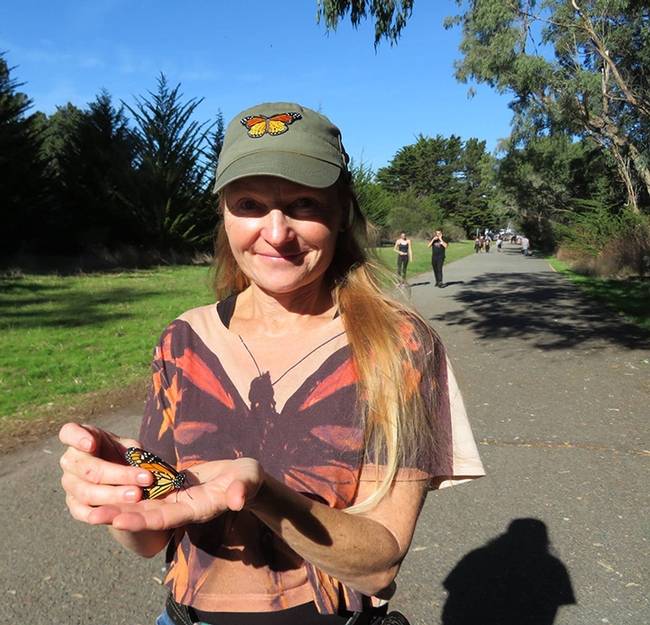 Moment of flight: a butterfly, born and reared in Vacaville, poised to fly in Santa Cruz. (Photo by Kathy Keatley Garvey)
So here we are, planning a long-awaited 113-mile trip from Solano County to Natural Bridges State Park, Santa Cruz, to admire and photograph the overwintering monarch butterflies.

Then it happened. The three monarchs caterpillars that we'd been rearing in our indoor butterfly habitat, pupated, forming those familiar, awe-inspiring jade-green chrysalids. Soon three monarchs--two males and a female--eclosed.

The first monarch, a male, eclosed on Tuesday, Nov. 8, Election Day. What to do? Wait for the other two to eclose and drive them all to Santa Cruz—since we're going there any way on Monday, Nov. 14-- or release him now? Decisions, decisions, decisions.

An inner voice argued with me.

Me: “Release him. Let him be a butterfly.”

Inner Voice: “If we transport him there, he'll have a better chance of survival. It's November and pretty late in the migratory season for him to make that 113-mile journey. He can join the cluster of 800 to 1000 already there, overwintering high and happily in the eucalyptus trees, and then next February, he'll head inland.”

Me: “No. Release him. He's antsy. He wants out. Besides, how do you know if wants to go to Santa Cruz? Maybe that's not on his itinerary!” Inner Voice, listening to a line from Kris Krisofferson's song, Me and Bobby McGee (“Freedom's just another word for nothin' left to lose”): “Okay, agreed. He needs his freedom. He needs to spread his wings and live his life.”

So off went Butterfly No. 1, soaring 80 feet high into the air. He never looked back.

Then a female eclosed on Thursday, Nov. 10 and a male on Friday, Nov. 11, Veterans' Day. The weather report indicated rain within the next few days. Release them or drive them to Santa Cruz?

Me: “Well, since we're going there any way on Nov. 14, and the monarch population is declining, why not take these two to Santa Cruz?”

So off we went, Don, Marilyn, Jim, yours truly and the two monarchs, Danaus plexippus, well fed and roosting comfortably in their mesh butterfly habitat.

We left Fairfield mid-morning on Nov. 14, and after a 90-minute trip, arrived at Natural Bridges around noon. It was a picture-perfect autumn day, a day to treasure, with temperatures at 60 degrees and rising. And, there we were, standing in the monarch sanctuary, in awe of a thousand tiny butterflies silently clustering in the towering eucalyptus trees. From 80 feet below, the drab-graylike clusters looked ever so much like dead leaves. When the clusters broke in the warmth of the sun, the sanctuary took on a life—and color--of its own. The iconic orange, black and white butterflies glided and soared above us in numbers that folks rarely see.

There is strength in numbers. Color, too.

We found a secure place, away from the crowd, to release the Vacaville born-and-reared monarchs. The female went first, fluttering delicately out of Marilyn's hand to join the others. The male lingered several minutes on her finger, and then he, too, departed, soaring high.

Freedom's just another word for nothin' left to lose…

Poet Gertrude Stein once described Oakland as: “There is no there there.”

But in monarch overwintering sites in Santa Cruz, there is. There is a "there" when “they're there.” 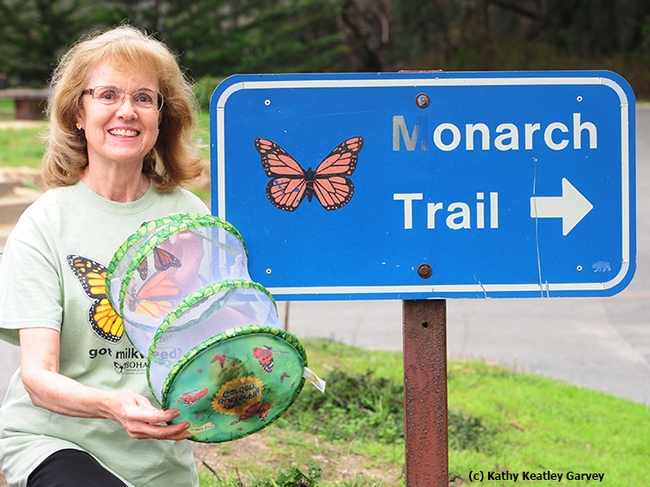 Marilyn, a butterfly enthusiast from Fairfield, ready to release two monarchs at the Natural Bridges State Park's monarch sanctuary. The butterfly mesh habitat is from the Bohart Museum of Entomology, UC Davis. The "Got Milkweed" monarch t-shirt is also from the Bohart. (Photo by Kathy Keatley Garvey) 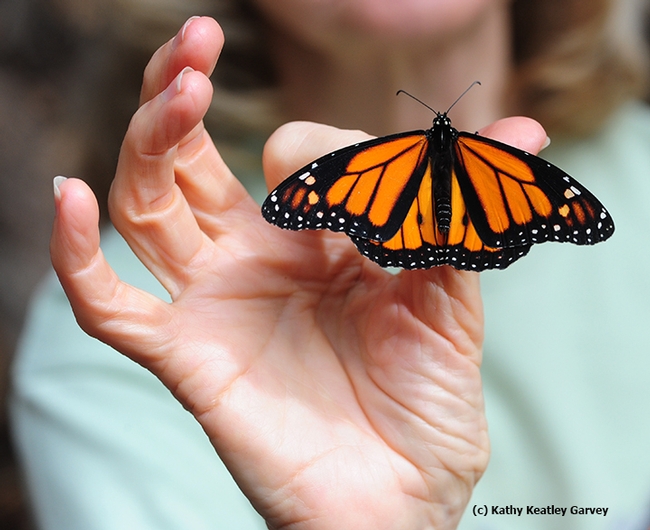 A male monarch, born and bred in Vacaville, lingers before fluttering off to the monarch sanctuary. (Photo by Kathy Keatley Garvey) 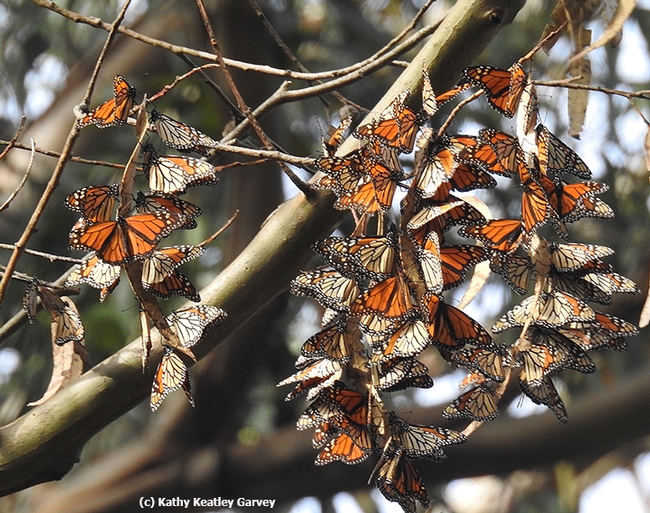