Bug Squad
sitenum=63
Happenings in the insect world
Two Bees: A Close Encounter with a Cousin

So here I am, a male Valley carpenter bee, Xylocopa varipuncta, just enjoying the nectar on this tower of jewels, Echium wildpretii, in Vacaville, Calif.

Some folks call me "The teddy bear bee."

Yes, I like that nickname. The late Robbin Thorp (1913-2019), UC Davis distinguished emeritus professor of entomology, used to call me "the teddy bear bee" and display me at the Bohart Museum of Entomology open houses, because, well, for one, I am "cuddly"; two, I resemble a teddy bear; and three, I don't sting.

They also say I'm handsome, what with my golden blond hair and green eyes. Aww, shucks!

"Mirror, mirror on the wall, who's the fairest of them all?" Me.

But just don't mess with me.

So here I am, as I earlier mentioned, just enjoying my share of nectar on this tower of jewels. Ooh, the nectar is divine. Divine, I say.

Wait! What's that? A honey bee, Apis mellifera, is trying to horn in on my territory.

Whoops, she's moving! She's moving toward me! Oh, dear! She's closing in on me.

Umm...bye, bye, Echium wildpretii...your nectar isn't as good as I thought it would be. Not with that honey bee refusing to keep her social distance! I'm outta here! 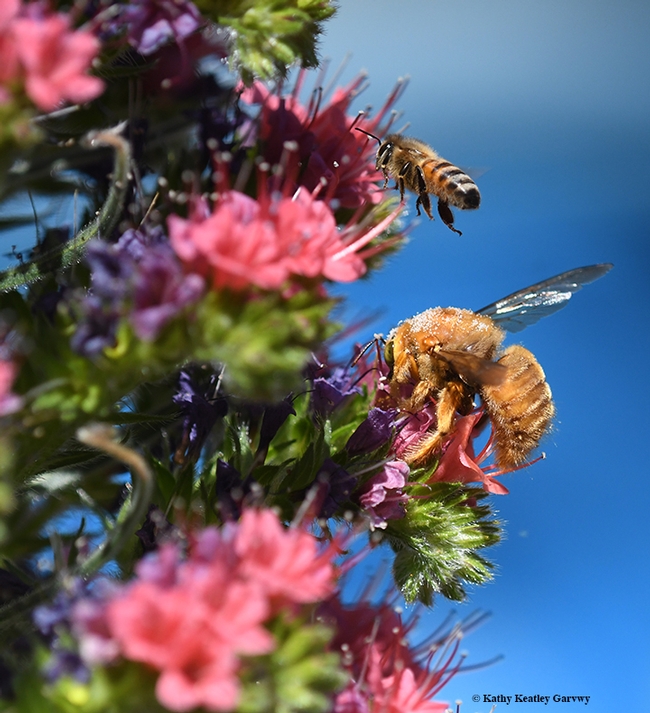 A honey bee, Apis mellifera, buzzes over the head of a male Valley carpenter bee, Xylocopa varipuncta, on a tower of jewels, Echium wildpretii. (Photo by Kathy Keatley Garvey) 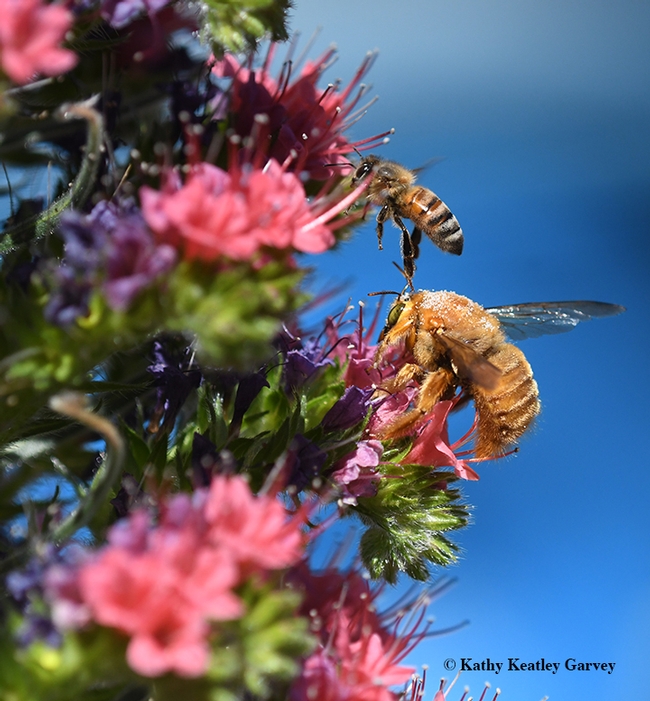 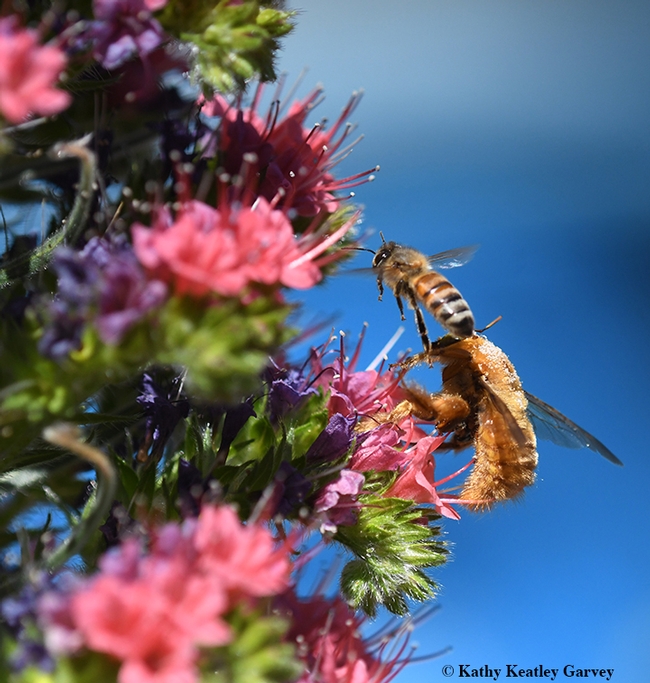 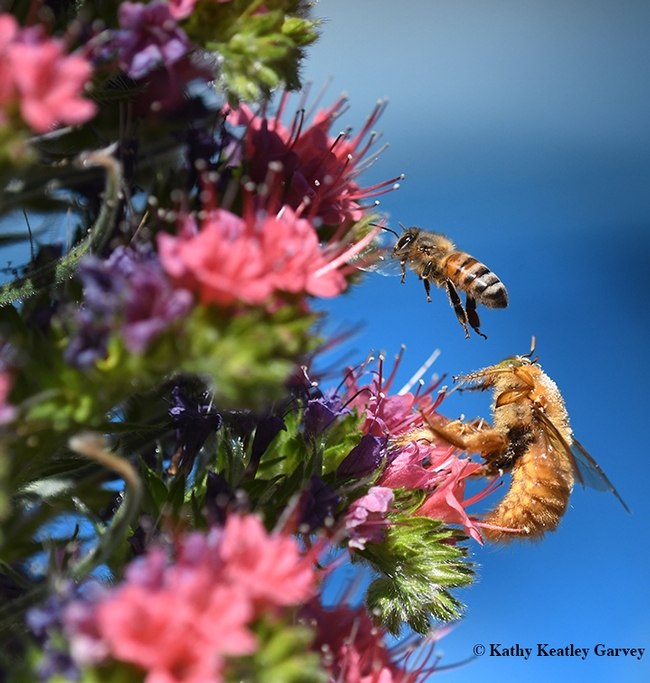 Up, up and away. Off to the next blossom. (Photo by Kathy Keatley Garvey) 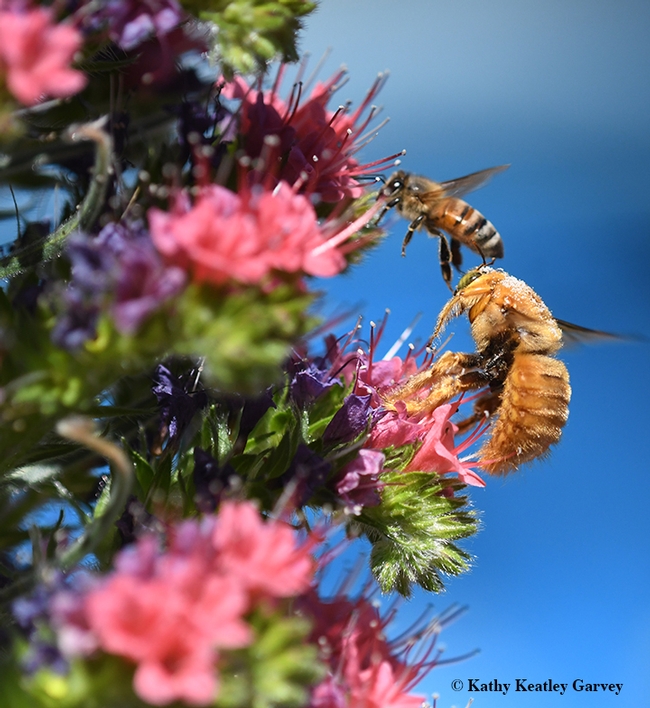 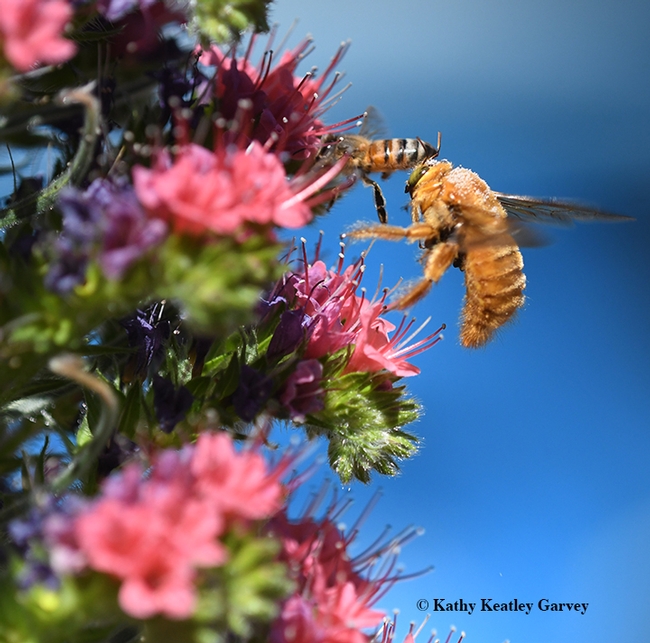 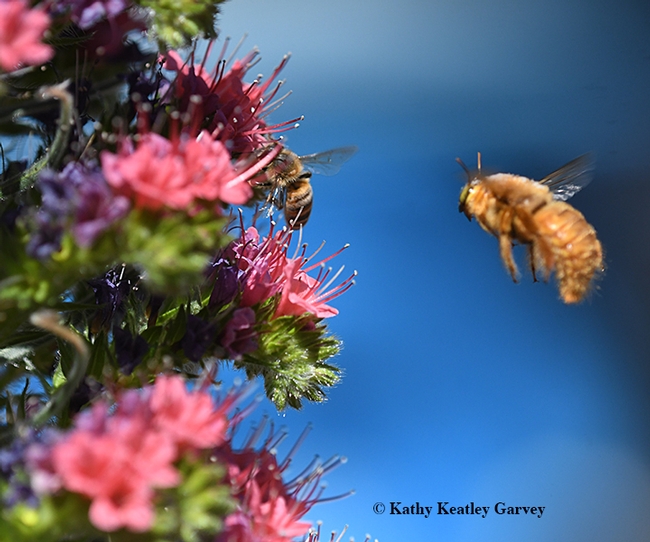 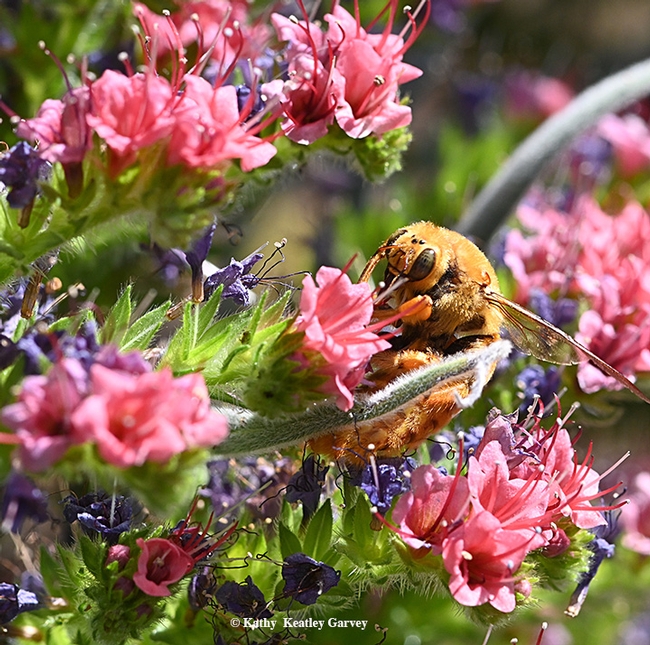 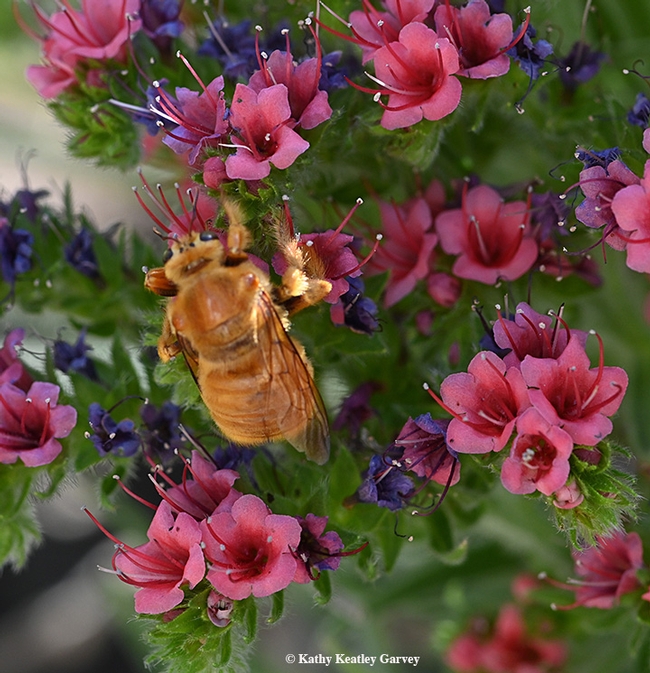 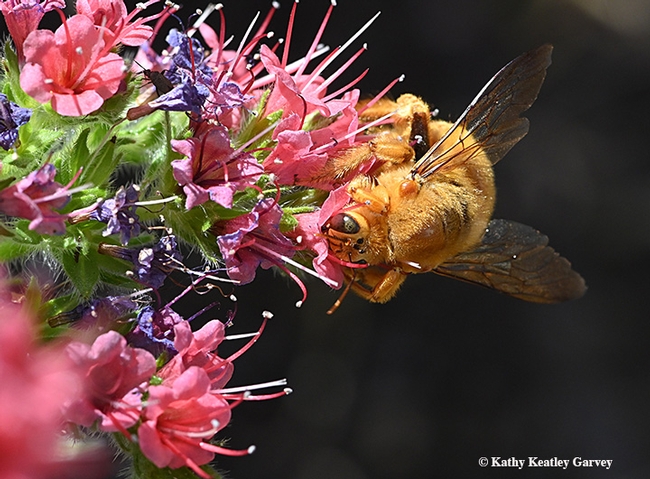 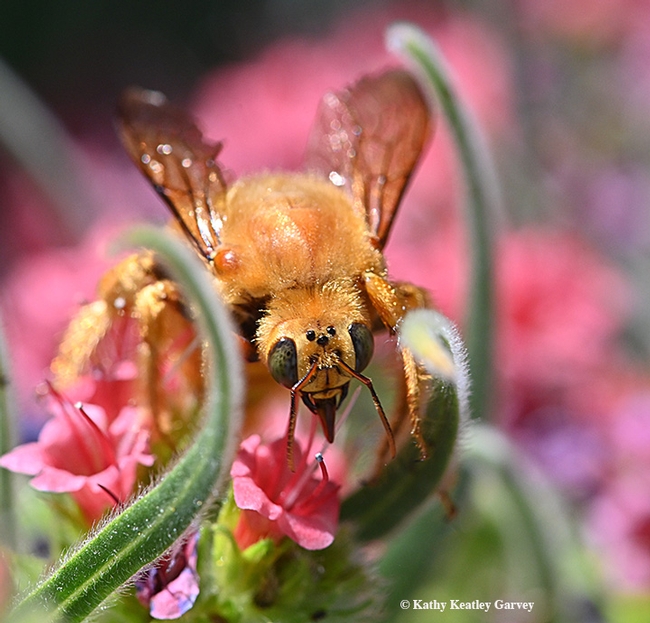 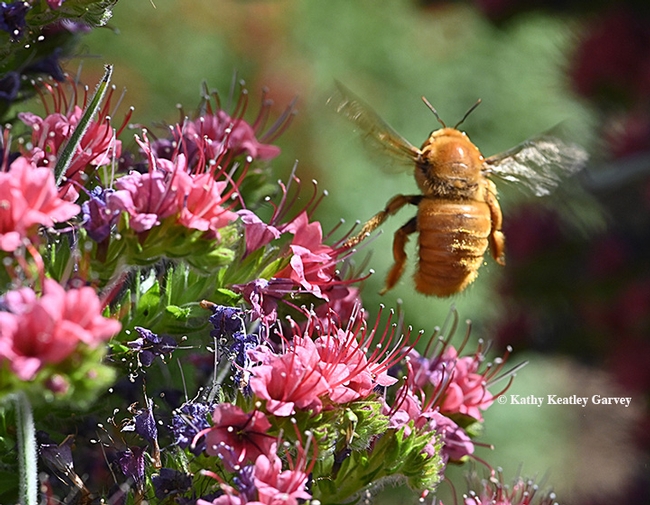 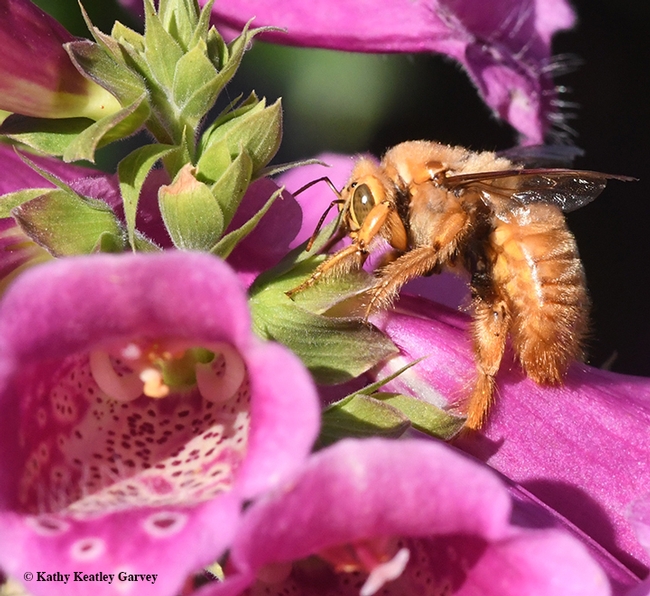 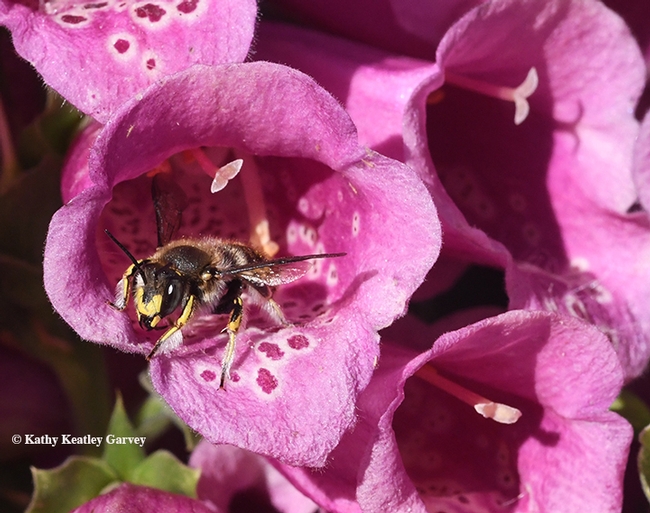 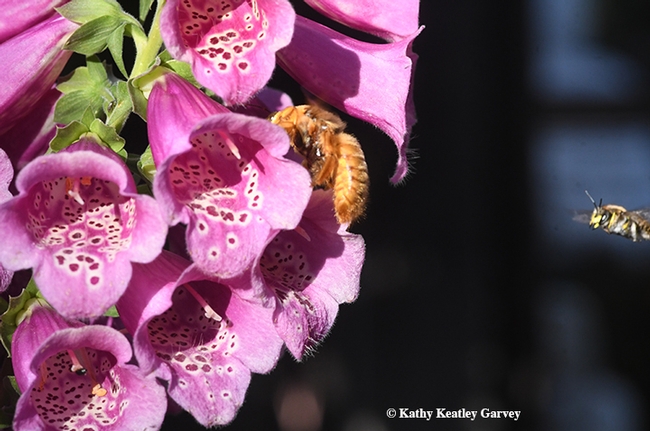 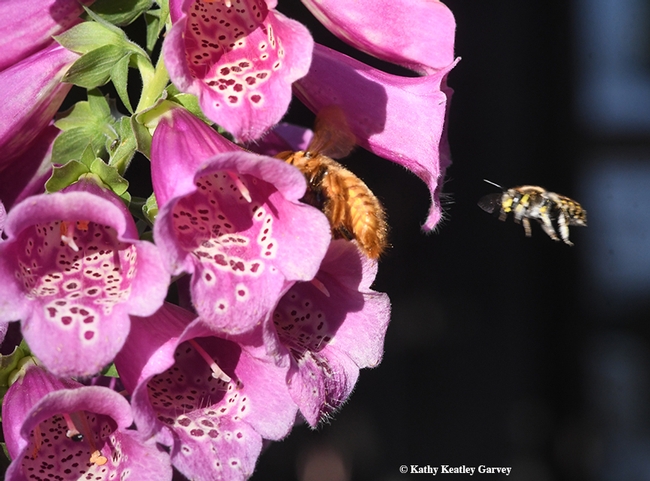 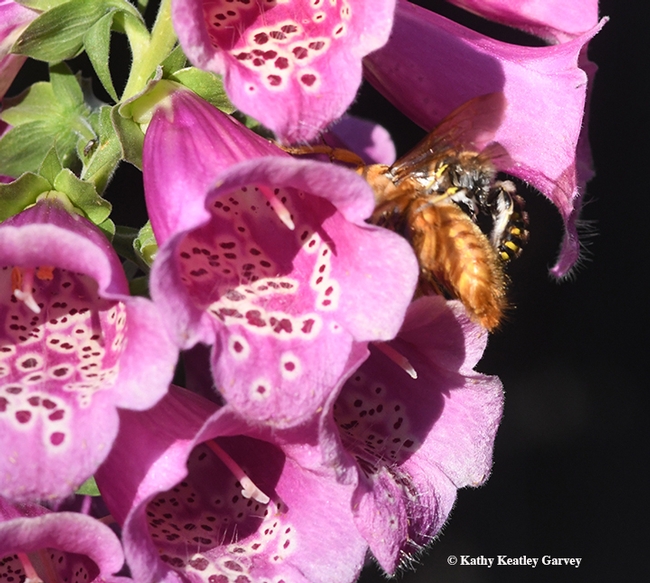 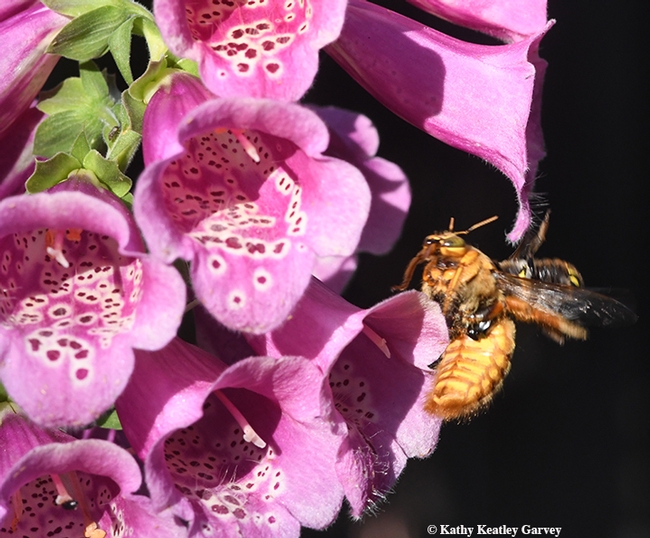 The boys are back in town!

Well, at least one is. We don't know where the girls are. Neither, apparently, does he.

A male Valley carpenter bee, Xylocopa varipuncta, aka "the teddy bear bee," buzzed into our mustard patch Sunday and nectared on the blossoms for about 10 minutes.

Often mistaken for a "new species" of bumble bee--well, it's about the size of a bumble bee--the teddy bear bee is a lavish golden color with sea-green eyes. The female of the species is a solid black metallic color with dark eyes. Sexual dimorphism at its finest...

When apprehensive youngsters see the bee in his hands, he assures them  "Boy bees don't sting."

They don't, but sometimes they posture as if they do... 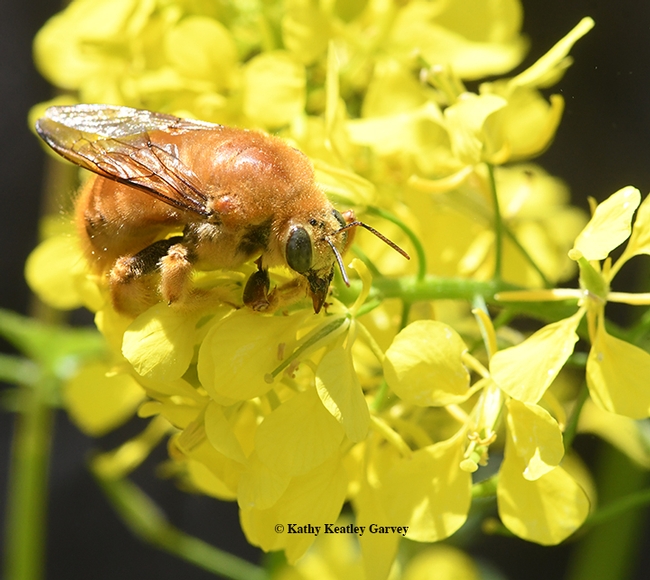 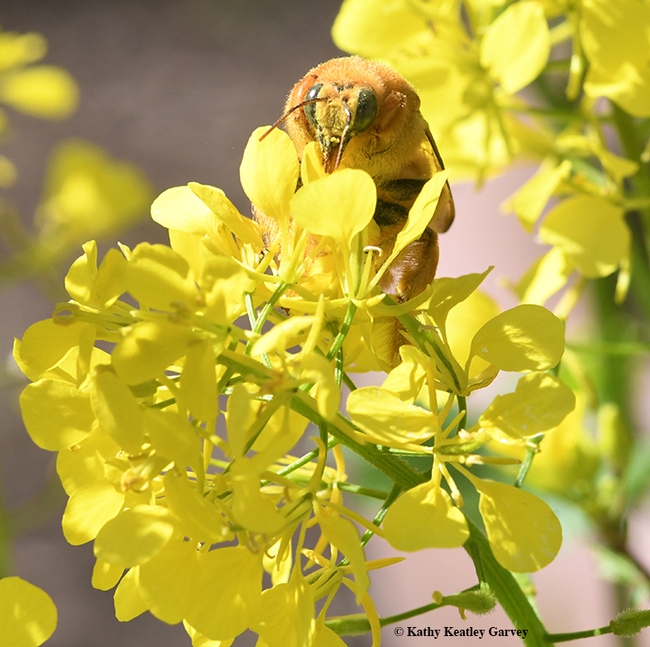 Before: Crystal Homicz gets ready to shine a black light on Wade Spencer's scorpion.
Oh, the bugs! Bigger. Better. Buglier.

And in an amazing moment, a young boy, wearing a bumble bee t-shirt, walked up to see the bees. "My kind of guy!" quipped Thorp when he saw Adne Burruss, 6, of Irvine. Thorp is the co-author of Bumble Bees of North America: an Identification Guide (Princeton University) and California Bees and Blooms: A Guide for Gardeners and Naturalists (Heyday). Adne's mother,  Sigrid Burruss, a geneticist, is a UC Davis alumnus.

The male Valley carpenter bee (Xylocopa varipuncta), a green-eyed blond, is also known as "the teddy bear bee." The female of the species is solid black. Thorp urged visitors to touch the carpenter bee. "Boy bees don't sting," he assured them. He also displayed specimens of bumble bees and other native bees.

Bohart Museum associate Wade Spencer, an undergraduate majoring in entomology, brought along his pet scorpions. Assisting him was Crystal Homicz, an animal biology major. She periodically pointed a black light on his scorpion to show the fluorescence. (Visitors were not allowed to touch the scorpions, which are known for their venomous sting.)

Julianna Amaya, 10, of Martinez, was fascinated with the Australia walking sticks. She and sister, Jasmine, 14, and their mother, Rocio, watched it crawl up their hands. "Julianna is really into bugs," mom said.

The Bohart Museum, founded in 1946 and named for prominent entomologist Richard M.Bohart, is located in Room 1124 of the Academic Surge Building on Crocker Lane. Directed by Lynn Kimsey, professor of entomology at UC Davis, it is the home of nearly eight million insect specimens; a live petting zoo (including Madagascar hissing cockroaches, walking sticks and tarantulas); and a year-around gift shop stocked with T-shirts, sweatshirts, books, jewelry, posters, insect-collecting equipment and insect-themed candy. Future entomologist? Julianna Amaya, 10, of Martinez is fascinated by an Australian walking stick.