Spotted-wing drosophila on raspberry. (Photo by Kathy Keatley Garvey)
It's an invader that has long attracted attention--and alarm--in California agriculture.

Gress will discuss "Host Selection and Resistance Evolution in Drosophila Suzukii" at a UC Davis Department of Entomology and Nematology seminar at 4:10 p.m., Wednesday, Jan. 9 in 122 Briggs Hall.

He will be introduced by his advisor, integrated pest management specialist Frank Zalom, distinguished professor of entomology, UC Davis Department of Entomology and Nematology, and a past president of the Entomological Society of America.

"The female D. suzukii possess a unique serrated ovipositor that allows them to cut into ripening fruit, causing major economic losses for berry and cherry producers across the globe," Gress writes in his abstract. "Growers rely heavily on the use of insecticides to control this pest, and spinosad is among the most important materials currently available for protecting susceptible host crops."

Recent reports, however, "have raised concerns that the efficacy of this insecticide is declining in fields near Watsonville, Calif., a major hub of commercial berry production in the United States," Gress says. "In this seminar, I will present a series of studies aimed at assessing the degree of resistance in the population, the evolutionary potential for resistance to increase, and novel strategies for managing resistance in the field."

The spotted-wing drosophila, a major agricultural pest, damages fruit in many California counties, according to the UC Statewide Integrated Pest Program (UC IPM). "The males have a black spot toward the top of each wing. The females have not spots. They have "a very prominent, sawlike ovipositor for laying eggs in fruit." Gress joined the Zalom lab in January 2017. He lists his research aims as

At Syracuse, Gress received the 2016 Alexander Gourevitch Memorial Award, in recognition of research excellence; and the 2016 College of Arts and Sciences Outstanding Dissertation Award. In 2015 he was awarded a National Science Foundation Doctoral Dissertation Improvement Grant of $19,050. 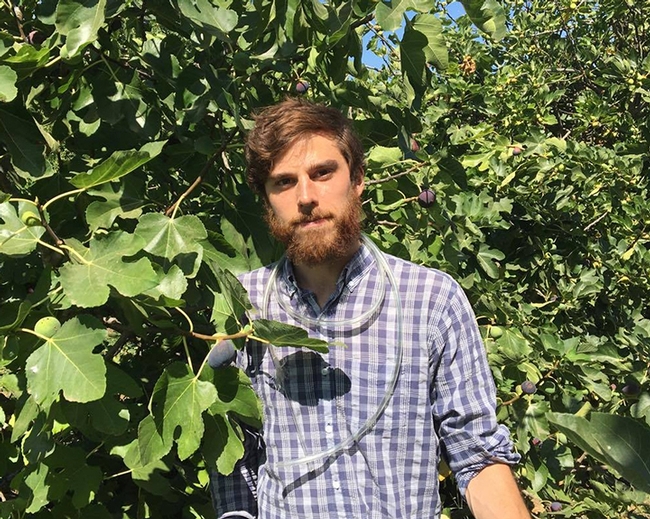