Bug Squad
sitenum=63
Happenings in the insect world
Boys' Night Out: Let's Have a Slumber Party! Close-up image of a male Melissodes agilis as it greets a new day. (Photo by Kathy Keatley Garvey)
Let's have a slumber party!

Don't bring a pillow, a night-cap or an attitude—it's Boys' Night Out and we're sleeping outside on the flowers.

That's what the male longhorned bees, Melissodes agilis, do while the females return to their underground nests at night.

This native species is among California's 1600 species of undomesticated bees.

Ever seen a Boys' Night Out? It's fascinating. The boys curl into a comma, or doze with their heads down and striped abdomens up.

Over the last two weeks, we've been monitoring the number of males sleeping on a single Mexican sunflower, Tithonia rotundifola, in our Vacaville pollinator garden. On the first night, two. Then three, then four. The slumber party grew to five last night. They sleep on a 10-foot-high blossom (talk about height advantage and a bird's eye view)!  Every night, they return to the very same blossom.

A few years ago we saw the males sleeping on our lavender stems and then they moved to Gaura stems, probably due to the proximity of three praying mantids.

Folks ask if they sting. No. Boy bees don't sting. They can't.

The late Robbin Thorp, distinguished emeritus professor of entomology and co-author of California Blooms and Bees: an Identification Guide for Gardeners and Naturalists, fielded scores of questions on these slumbering bees. “They (males) lack a stinger which is a modified ovipositor in their wasp ancestors. Boy sleeping aggregations are based on a suitable perch and not related to where females are nesting, but probably no more than 100 yards from the nearest female nest. Females nest in the ground and have rather distinctive round holes about the diameter of a pencil or slightly smaller, sometimes with small piles of dirt around them looking like mini-volcanos.  The holes may be widely separated or clustered together depending on the species, but each female digs her own burrow."

Of course, not all slumbering bees in this area are Melissodes agilis, as Thorp pointed out. Some may be other species of the genus Melissodes and some may belong to the closely related Svastra obliqua.

The boy bees start arriving for their nightly sleepover around 5 p.m. or when the light fades. Sometimes they appear to be kicking each other before settling down for the night. Said Thorp: "Each establishes his own spot, so there may be some jostling for position initially."

When it's morning, they rise, warm their flight muscles, sip a little nectar, and begin dive-bombing the honey bees, carpenter bees, bumble bees, butterflies, syrphid flies and assorted other insects on "their" flowers.  M. agilis are very territorial. They're trying to save the food source for the females of their own species—so they can mate with them, as Thorp related.

When their day ends, they cluster for another Boys' Night Out. It's "Nighty Night, Sleep Tight." Time to curl up on a cushion of petals beneath a blanket of stars. 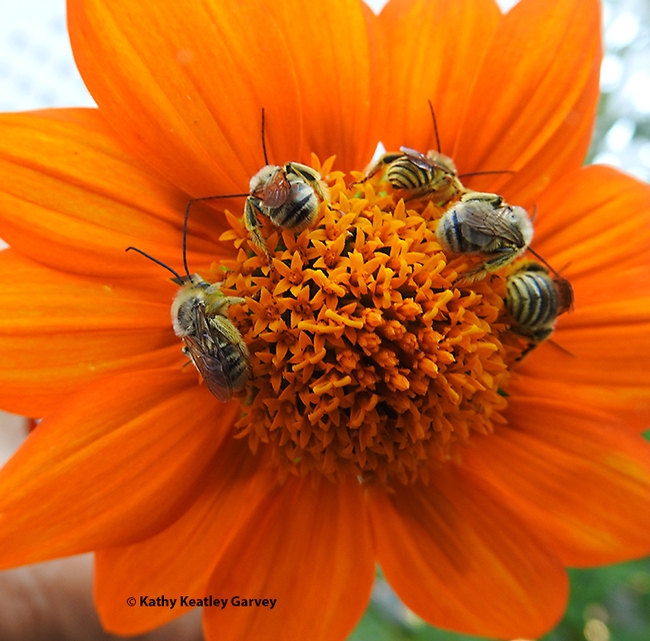 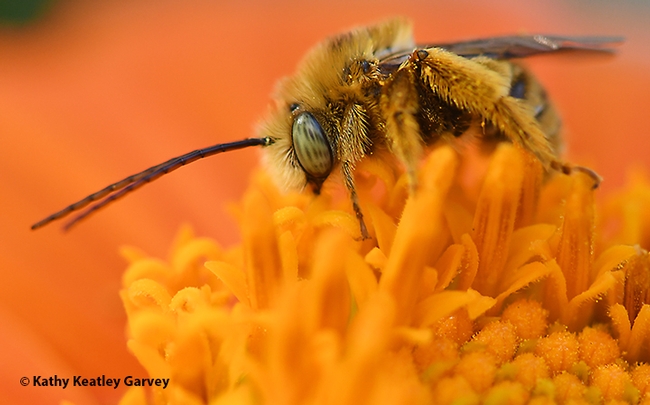 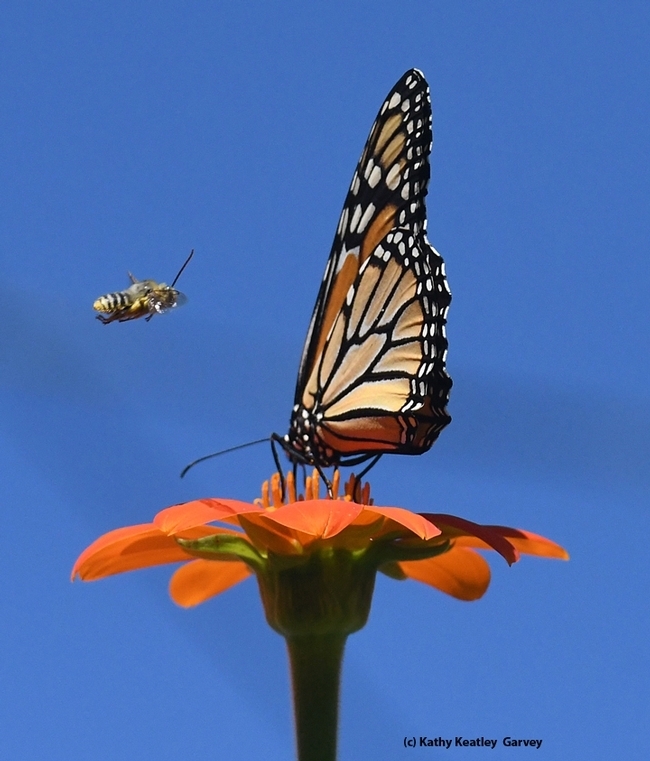 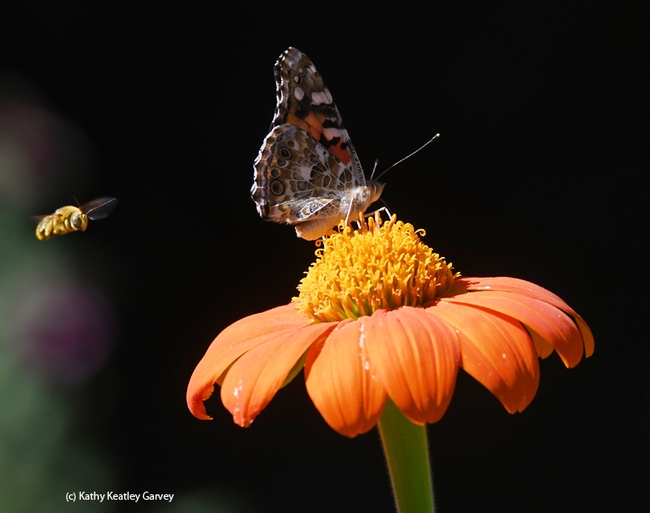 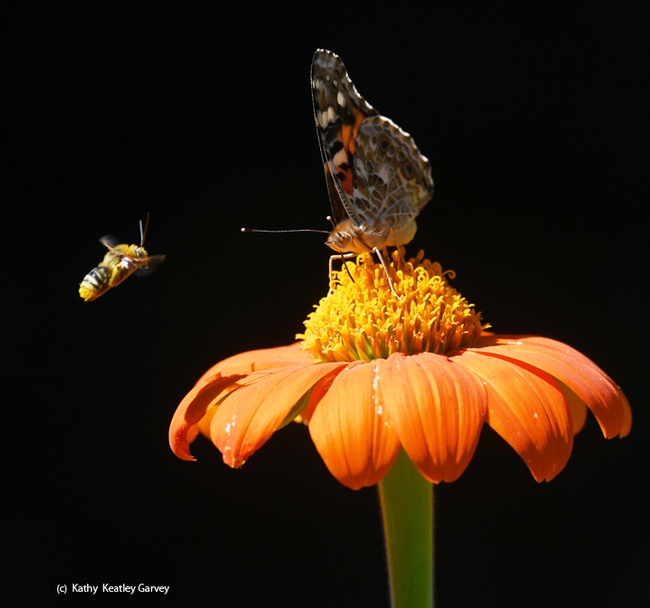 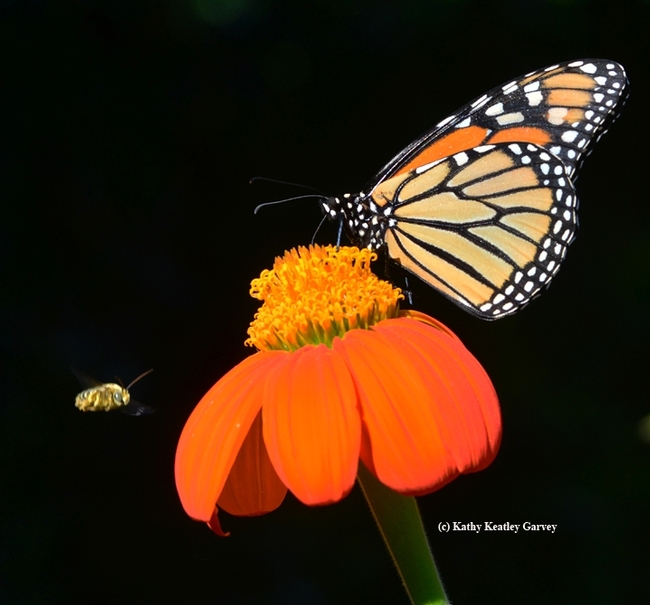