Visit to Decanso Gardens
Published on: March 1, 2020
Descanso Gardens is a 150-acre botanical garden located in La Cañada Flintridge, Los Angeles County, California. Descanso was originally the home of E. Manchester Boddy, who donated it to the County of Los Angeles.

The garden is best known for its camellia, Japanese, and California native gardens.  If you have children (or grandchildren) in tow, there is even a train ride to enjoy! Native bee house
When we visited in early February, the camellias were beginning to bloom.  While the garden is peaceful, it has its origins in wartime. With the United States' entrance into World War II, Boddy purchased a large portion of the camellias from two Japanese-owned nurseries when the families (the Uyemastus and Yoshimuras) were forcibly removed from the West Coast.

The tranquil Japanese garden is nestled among the camellias and has some beautiful koi ponds to enjoy.  An interesting aspect of this garden is that it is located in a transition zone between urban and native habitats — hillsides dotted with oaks and California natives.  I would recommend saving a visit to the California native garden for the spring or early summer, when the plants are in bloom. Bee Hive Art
Saving the best for the last, there is actually an art gallery at the top of a hill in the garden: the Sturt Haaga Gallery. This gallery contains revolving exhibits, but at the time we were visiting, there were several displays of particular interest to the gardener.  (Several are shown on this page.)

The themes of the art on display were fruit and bees, tomatoes as fine art, and beehives — complete with bee sounds from deep inside the hive! Grafted apple tree on display.
The art gallery included a display of photographs documenting the work of top U.S. apple breeder Dr. Susan Brown.  Since apple trees are heterozygous (you don't know what you are going to get when you plant a seed), the only way to reproduce an apple tree is by cloning (grafting small buds or scions onto rootstock).

In another apple-themed display, a set of pictures by Los Angeles artist Jessica Rath documents her visit to Kazakhstan, the site of the original, wild apple forests from which all our domesticated apples originated. There is an ongoing effort to preserve the original forests, which are collocated with apple orchards in the area.

Less crowded than many other gardens in southern California, this garden can be well worth the effort to visit.  Be sure to pop into the Dream House next to the gallery to see a well-stocked garden library as well. 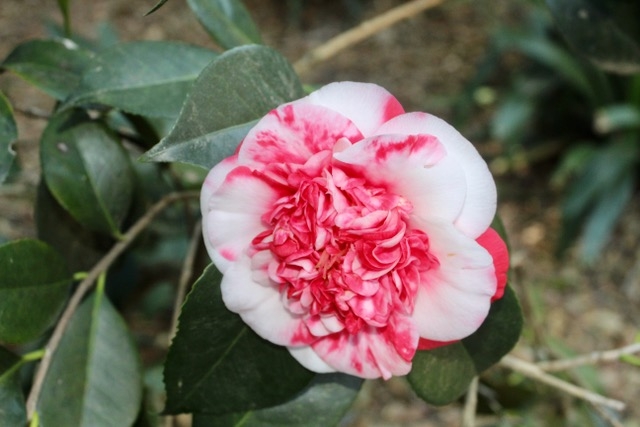 The Inyo-Mono County Master Gardener Executive Board is excited to announce a new project, which will hopefully become an annual part of Member activities. We are going to partner with the Manzanar Historic Site to work on specific areas identified by Manzanar, leading to educational material, and ultimately a roster of Master Gardener docents on Manzanar's schedule, leading orchard and garden tours.

Manzanar was once the site of a town in Inyo County, where citizens started large pear and apple orchards. During World War II, the US Army turned the town site into an internment camp that confined over 10,000 Japanese Americans and Japanese immigrants. Among the internees were many talented gardeners, who set to work to build beautiful gardens for the enjoyment of internees. In addition, the internees worked on the historic orchards to grow fresh food for the internees.

The camp was closed on November 21, 1945, but through the efforts of activists who wanted to be sure that this episode of American history would not be forgotten, in 1992 the Manzanar National Historic Site was created. Since that time, site archeologists and arborists have worked to reconstruct some of the gardens built by internees during the war, and orchards that dated back to the days before Manzanar became an internment camp. This work is ongoing.

The Inyo-Mono Master Gardeners will initially do work in four areas. They will do research, prepare docent materials, and lead and train others to lead guided tours and become part of a pool of docents for garden and orchard tours.

(1)   Guayule: These volunteers will research and develop expertise in the care and cultivation of guayule (a native type of rubber-producing plant) and become familiar with the existing guayule at Manzanar, and its role in the history of Manzanar. The Merrit Garden. One of the largest of the Community Gardens A reconstructed barracks garden with pond

(4)   The Manzanar Barracks Gardens: These volunteers will study photographs and oral histories, and conduct research into the Manzanar barracks gardens. They will propose and develop plans for the creation of historically accurate replicas of some of the barracks gardens.