She is staffing one of five interactive learning stations assembled in the UC Davis Department of Entomology and Nematology's bee garden, the Häagen-Dazs Honey Bee Haven, to teach third-graders from Amador County the importance of bees and other pollinators.

Brutscher discusses the residents of the hive: the queen, worker bees (females) and drones (males). The third-graders, sitting, standing or kneeling in the garden, listen to her wide-eyed.

“Who knows what the job of a drone is?” Brutscher asks.

A hand shoots up. “The drones protect the queen!” a boy declares.

“The drone's only purpose is to mate with the queen,” Brutscher tells him. “The worker bees or females guard the hive.”

The students learn that the honey bee colony is a matriarchal society. The females do all the work, performing specific tasks with job titles such as nurse maids, nannies, royal attendants, builders, architects, foragers, dancers, honey tenders, pollen packers, propolis or "glue" specialists, air conditioning and heating technicians, guards, and undertakers. The queen can lay up to 2000 eggs a day during peak season.

The third graders then suit up, donning assorted beekeeper protective gear. They pose gleefully in oversized suits while adults on the tour--teachers, parents and mentors--photograph them.

Overall, it was a honey of a day at the haven, a half-acre public garden installed in 2009 on Bee Biology Road, west of the central campus. Divided into small groups, the students excitedly buzzed from one learning activity to another, not unlike bees buzzing from one flower to another.

Statewide Extension apiculturist Elina Lastro Niño of the UC Davis Department of Entomology and Nematology faculty and director of the California Master Beekeeper Program, explained  pollination and how honey bees differ from such generalists as bumble bees and such specialists as squash bees. She invited the students to build their own bee, using pipe cleaners of various lengths to mimic how they are able to pollinate flowers. The youngsters also tasted apples, blueberries and almonds. Honey bees, she told them, pollinate one third of the food we eat.

Charley Nye, beekeeper and manager of the Harry H. Laidlaw Jr. Honey Bee Research Facility, zeroed in on the products of the hive. “When we see bees flying around, what are they doing there?” he asked.

“They're out gathering nectar and pollen,” responded one youngster. A honey bee forages on a honeycomb. (Photo by Kathy Keatley Garvey)
“That's right,” Nye said. He then introduced them to five varietals of honey: almond, coffee, cotton, blackberry, meadowfoam.

The students and adults liked the meadowfoam the best. “It tastes like cotton candy!” one girl said, slowly savoring the flavor she found reminiscent of a county fair.  Most considered the almond honey "a little bitter and acidic," Nye said, but a few favored it because "it's not so sweet."

Wendy Mather, California Master Beekeeper Program manager, showed the youngsters a bee vacuum device and how to catch and release bees. “They gently collected, viewed and released the bee specimens,”  Mather related. The other half of her group crafted seed cookies, decorated pots, and planted seeds for pollinators. They also viewed the bee and syrphid (hover) fly specimens loaned by pollination ecologist Neal Williams, UC Davis professor of entomology.  The hover fly, sometimes called a flower fly, is a major pollinator.

Another station focused on solitary bees: leafcutter bees and blue orchard bees. The students painted nest boxes and learned how the native bees differ from honey bees. Honey bees are not natives of America; European colonists brought them to Jamestown, Virginia,  in 1622. Honey bees did not arrive in California until 1853, the year a beekeeper installed colonies near San Jose.

Marcel Ramos, lab assistant in the Elina Niño lab, opened a hive inside a netted enclosure and showed the students the queen bee, workers and drones and pulled out frames of honey.

The event received financial support from the UC Davis College of Agricultural and Environmental Sciences Programmatic Initiative Grant, the Scott and Liberty Munson Family, and matching funds from Microsoft.

“This program was developed to ensure that our young scientists and future voters are aware of the importance of pollinators to our food production and ecosystems," Niño said. "We are also very excited to partner with programs across the university to recruit and support UC Davis students in becoming interns and mentors for the program. This program has already generated so much excitement with the kids and we want to provide this opportunity to as many schools as possible.”

“The program presented by Elina and the Häagen-Dazs Honey Bee Haven team was an incredible experience for all involved: students, parents, teachers and mentors from Farms of Amador and Amador County Master Gardeners," Antone said.  “I could not have imagined a more successful trip."

Neither could the students. It was all that it was cracked up to "bee"--and much more. 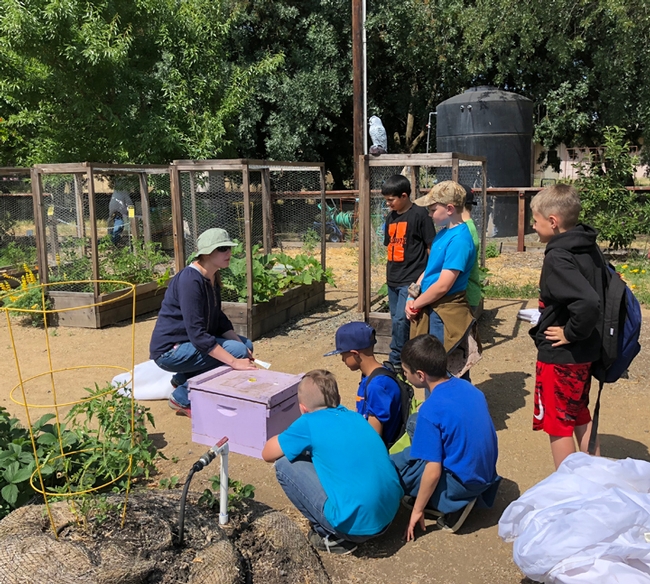 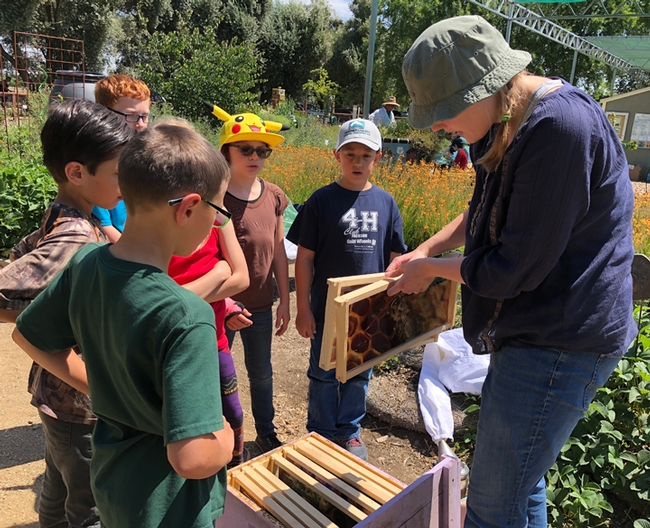 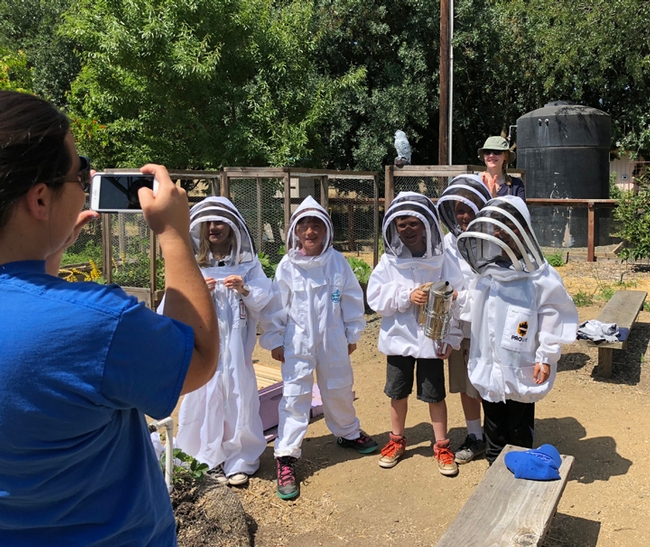 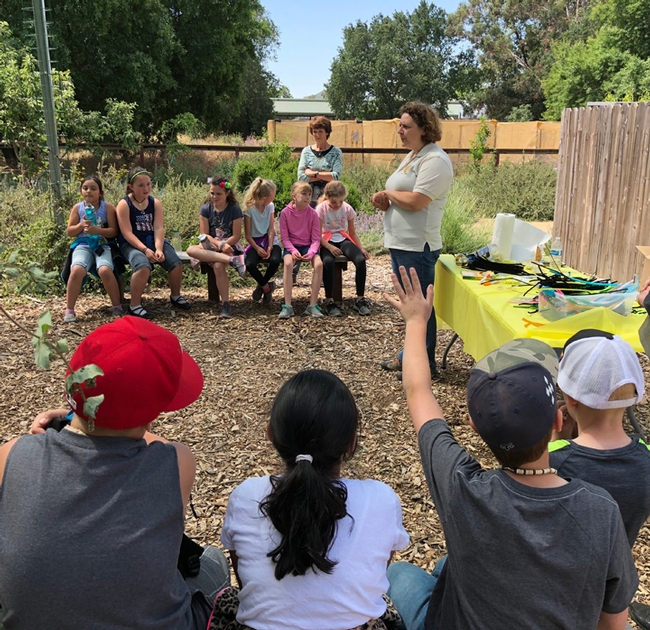 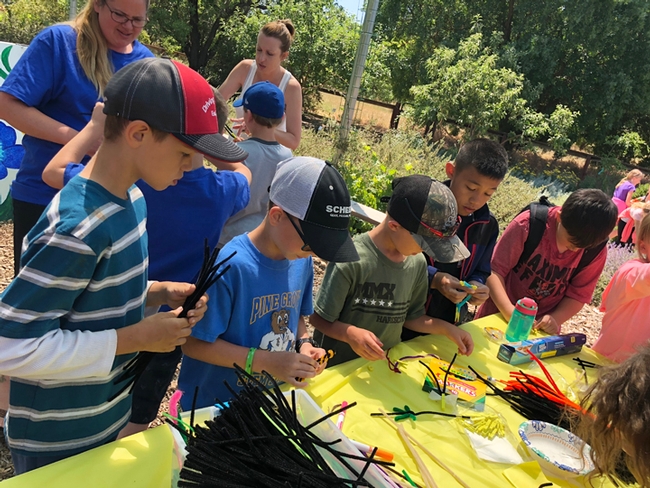 Students try their hand at "making a bee." They learned about generalist and specialist bees. (Photo by Kathy Keatley Garvey) 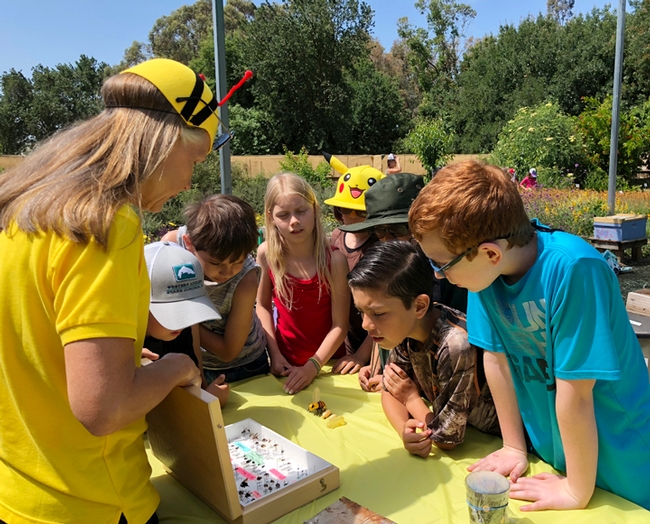 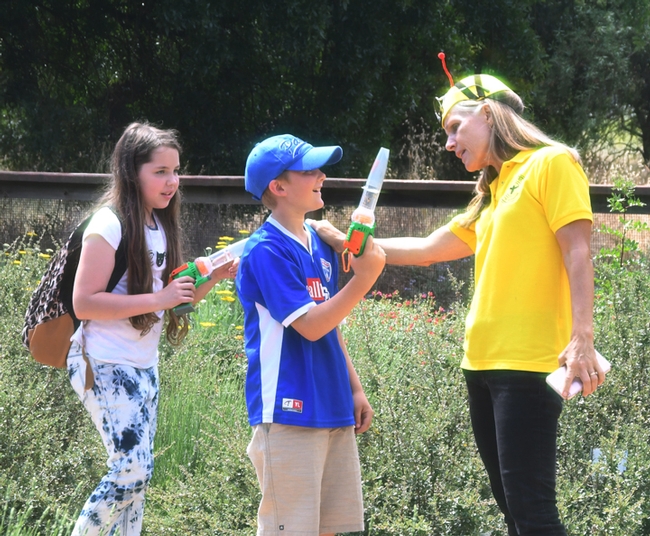 Wendy Mather, manager of the California Master Beekeeper Program, tells students how to use a bee vacuum device for "catch and release." (Photo by Kathy Keatley Garvey) 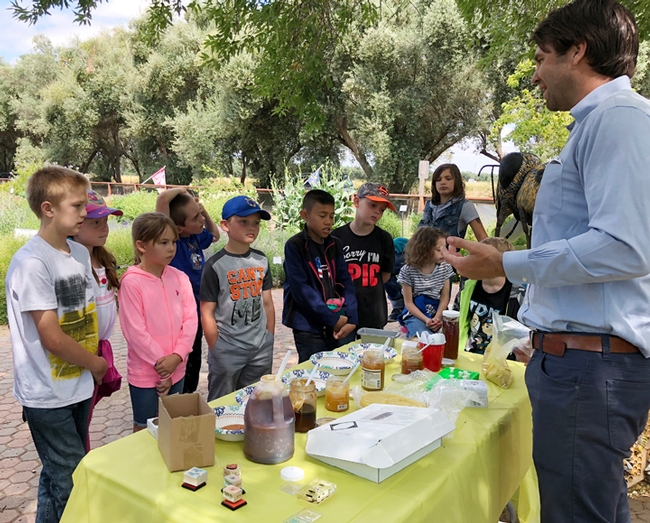 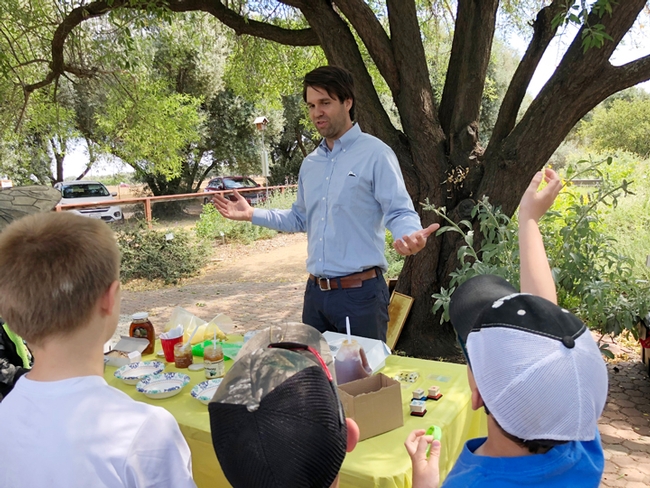 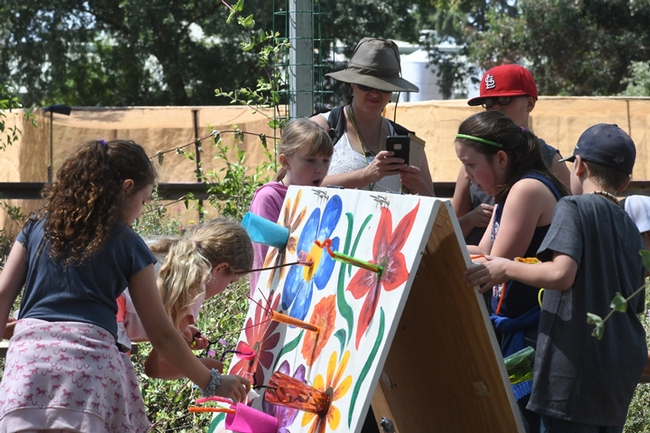 This was the scene at the "Pollinator Power" station staffed by Extension apiculturist Elina Lastro Niño. (Photo by Kathy Keatley Garvey) 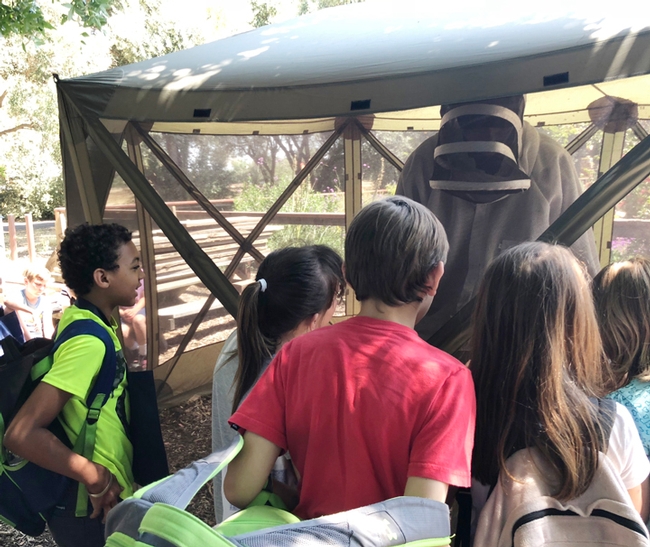 Students crowd around as Marcel Ramos, assistant manager of the Niño lab, opens a hive behind a netted enclosure. (Photo by Kathy Keatley Garvey) 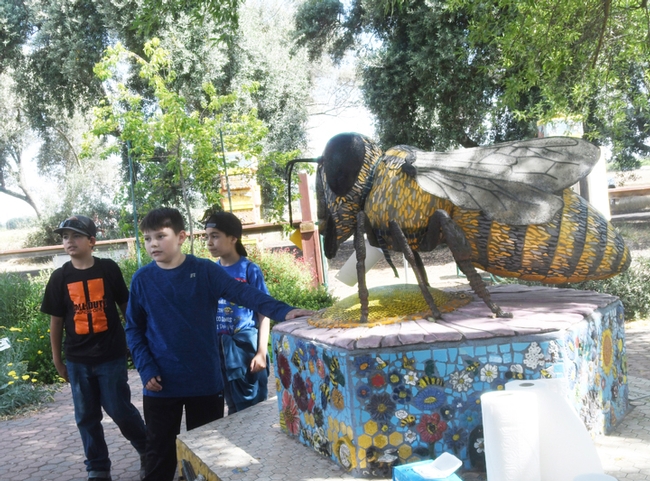 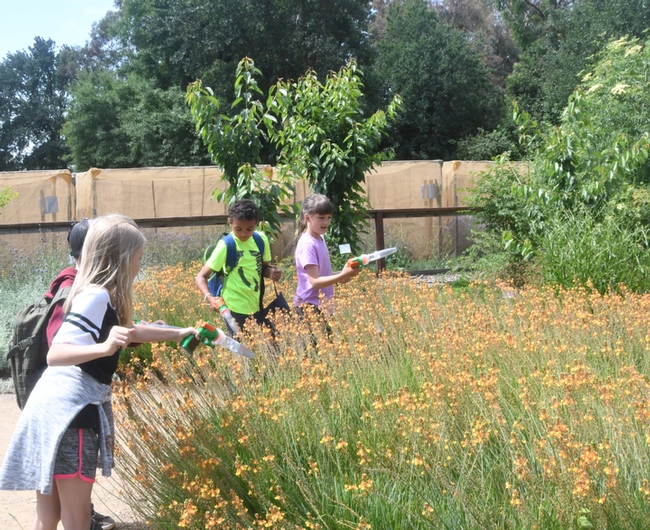 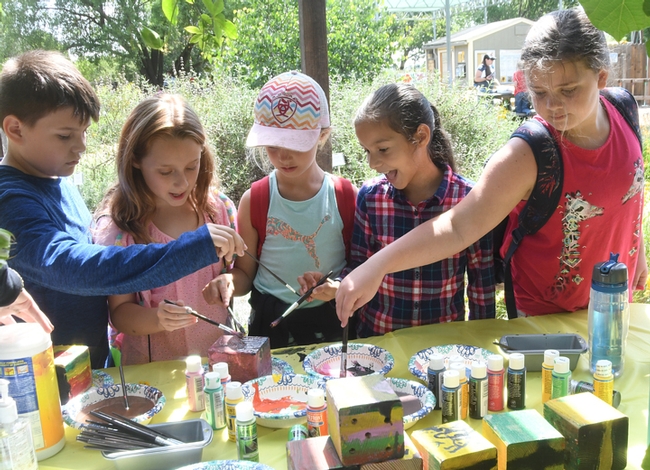