Keynote speaker Christina Grozinger of Pennsylvania State University
A capacity crowd of 250 will attend the fourth   International Pollinator Conference, to be hosted by the University of California, Davis from Wednesday, July 17 through Saturday, July 20 in the ARC Ballroom.

A welcoming reception will take place from 6:30 to 8 p.m. Wednesday in the Good Life Garden at the Robert Mondavi Institute, 392 Old Davis Road.

Themed “Multidimensional Solutions to Current and Future Threats to Pollinator Health,” the event will cover a wide range of topics in pollinator research: from genomics to ecology and their application to land use and management; to breeding of managed bees; and to monitoring of global pollinator populations.

Keynote speakers are Lynn Dicks, Natural Environment Research Council (NERC) Research Fellow, School of Biological Sciences, University of East Anglia, England, and Christina Grozinger, distinguished professor of entomology and director of the Center for Pollinator Research, Pennsylvania State University. Grozinger and Rufus Isaacs of Michigan State University launched the conference in 2012. They are held every third year; this year is the fourth conference.

Dicks will speak at 9 a.m., Thursday, July 18 on "The Importance of People in Pollinator Conservation" while Grozinger will address the crowd at 9 a.m., Friday, July 19 on "Bee Nutritional Ecology: From Genes to Landscapes."

Among the speakers is Rachel Vannette, assistant professor, UC Davis Department of Entomology and Nematology, who will discuss her hummingbird research.

1:45 Session 4: Causes and Consequences of Pesticide Use: From Use Patterns to Pollination Services

(There are no plans to video record the conference) 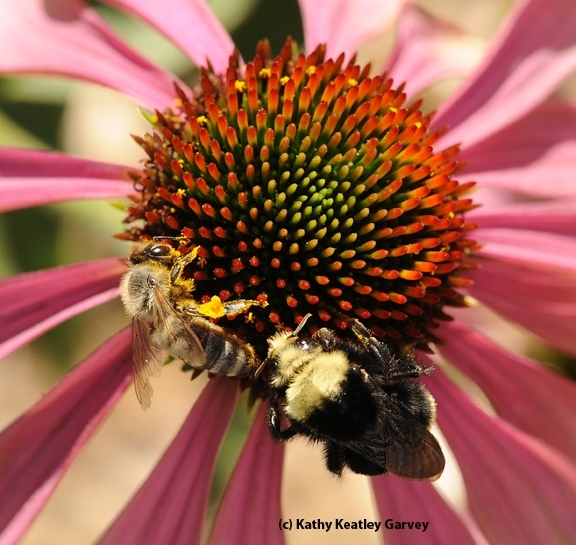 Christina Grozinger
DAVIS--Christina Grozinger, professor of entomology at Pennsylvania State University and director of the Center for Pollinator Research, will present a special seminar “Bee Health: from Genes to Landscapes” at 1 p.m., Friday, March 6, in 122 Briggs, off Kleiber Hall Drive.

Grozinger will be hosted by her former graduate student, Extension apiculturist Elina Niño, UC Davis Department of Entomology and Nematology, who received her doctorate from Penn State.

"Populations of honey bees and other pollinators are in decline globally due to the effects of multiple biotic and abiotic stressors," Grozinger says in her abstract. "We have examined the impacts of several of these stressors (pathogens, parasites, and pesticides) on honey bee workers at the genomic level to determine if they perturb common or distinct pathways, and if these pathways are related to particular physiological functions or social behaviors. Parasitization with Nosema and chronic sublethal pesticide exposure both modulate expression of metabolic and nutrition-related pathways, suggesting that nutritional parameters can mitigate the impact of these stressors.  Additional testing demonstrated that diet can significantly influence individual bees' sensitivity to pesticides.  Furthermore, we have demonstrated that the nutritional quality of floral resources is influenced by environmental conditions, and, in turn, influences foraging preferences of bees.  Overall, our results demonstrate that the nutritional quality of floral resources is modulated by multiple factors, bees use nutritional cues while foraging, and high quality nutrition improves bees' resistance to stressors."

Grozinger's areas of expertise include

See her website for more about her lab research. Elina Niño
Honey bee scientist Elina Lastro Niño of Pennsylvania State University (PSU), University Park, known for her expertise on honey bee queen biology, chemical ecology, and genomics, is the newly hired Extension apiculturist at the University of California, Davis. She will join the UC Davis Department of Entomology and Nematology faculty in September, replacing Eric Mussen, who is retiring June 30 after 38 years in the position.

“We are excited about Elina joining the Bee Biology program at UC Davis,” said Michael Parrella, professor and chair of the UC Davis Department of Entomology and Nematology. “We have been in a rebuilding mode for the past few years and Elina joins the team of Dr. Neal Williams, pollination ecology and bee biology with emphasis on foraging behavior; and Dr. Brian Johnson, genetics, behavior, evolution, and health of honey bees. Dr. Niño will conduct problem-solving research focused on honey bees and those crops in need of pollination services.”

“In addition, with the establishment of the Häagen-Dazs Honey Bee Haven, adjacent to our bee biology facility, Dr. Niño will be able to effectively provide outreach to backyard beekeepers that represent a growing enterprise in California," Parrella said. "In addition to current bee biology faculty, Elina will be supported by Dr. Robbin Thorp, emeritus professor of entomology who studies bumble bee behavior and systematics, and, of course, Dr. Eric Mussen whom she is replacing. We are pleased that Dr. Mussen has agreed to remain active in an emeritus capacity and will be advising Dr. Niño on both her extension program and research activities.”

Said Grozinger: “Dr. Niño is internationally recognized for her work on queen biology, and has collaborated broadly with several key honey bee researchers in the United States, including David Tarpy, Peter Teal, and Jerry Hayes, as well as researchers in Israel, Europe and Australia.”

Niño said she is very excited to start working closely with the California beekeepers and growers to develop sustainable approaches to bee management. "The UC Davis bee lab has such a long, outstanding contribute to this great program,” she said.

“Elina is a very accomplished scientist,” said Mussen. “Her research involves the reproductive processes involved in queen bee mating, including the impacts of oviduct manipulation, insemination volume and insemination substances. The induced changes include measurable behavioral, physiological and molecular alterations that occur, including differences in behavioral interactions between queens and worker bees.” Niño said considering her interests in honey bee queen health she anticipates fruitful collaborations with the California queen breeders. Honey bee heading toward almond blossom. (Photo by Kathy Keatley Garvey)
As the Extension apiculturist, Niño will remain involved in basic honey bee biology studies, moving the applied research forward. She will devote 70 percent of her appointment to conducting practical, problem-solving research projects and interact with the beekeepers and industry concerns.

Niño received her bachelor's degree in animal science from Cornell University in 2003; her master's degree in entomology at North Carolina State University and her doctorate at PSU in Niño has a varied entomology background. While working on her bachelor's degree at Cornell, she was involved in studies on darkling beetle control in poultry houses, pan-trapped horse flies, and surveyed mosquitoes in New York state. While working toward her master's degree at North Carolina State University, she studied dung beetle nutrient cycling and its effect on grass growth, effects of methoprene (insect grown regular) on dung beetles in field and laboratory settings, and assisted in a workshop on forensic entomology.

As a USDA/NIFA postdoctoral fellow, Niño is contributing to honey bee stock improvement programs through her research on proteins in honey bee semen. She also is cooperatively reviewing the effects of Israeli Acute Bee Paralysis Virus, Deformed Wing Virus and Nosema on honey bees on a molecular level.

A member of the Entomological Society of America (ESA), Niño received a number of high honors as an entomology graduate student. She won the coveted John Henry Comstock Graduate Student Award from the Eastern Branch of ESA in 2013; first place in a poster student competition for the President's Prize at the ESA Indianapolis meeting in 2006, and also a first-place poster award at the North Carolina Entomological Society's Raleigh meeting in 2006.

Niño placed first in a student paper presentation at the 2008 American Bee Research Conference in Sacramento, and received a 2007 scholarship from the Foundation for the Preservation of Honey Bees, Sacramento. The North Carolina Entomological Society named her the 2006 Outstanding MS Student of the Year. 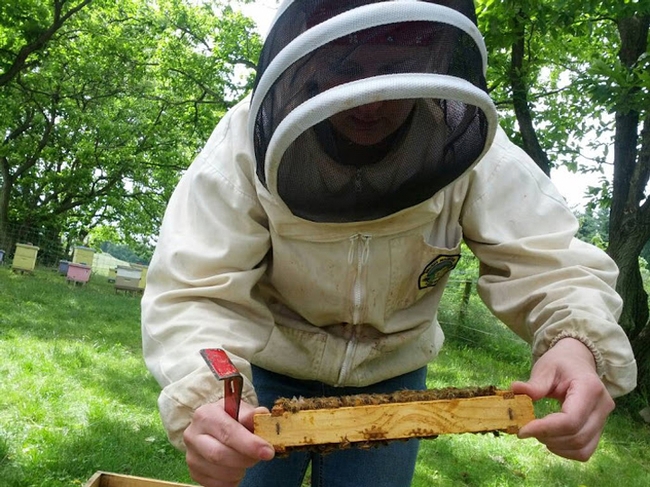