Les Ehler
DAVIS--Noted entomologist Lester E. “Les” Ehler, who for four decades championed the use of natural enemies to control agricultural pests and warned of the dangers of pesticides, has traded his insect net for a fishing net.

Known as the “quintessential biological control researcher,” Ehler joined the UC Davis Department of Entomology in 1973 as the first biological control specialist on campus. He retired Jan. 3 as an emeritus professor. During his 34.5-year career at UC Davis, he developed innovative and environmentally friendly ways to manage pests. In his retirement, he will seek innovative ways to manage what's on the end of his fishing pole.

“Les began teaching biocontrol classes for our department in 1974, drawing hundreds of students,” said Walter Leal, professor and chair of the UC Davis Department of Entomology. “He was trained in the 1960s by the founders of integrated pest management (IPM) and he advocated biological control methods as an important IPM pest control strategy. His work led to a better understanding of how predators and parasites can control pests without pesticides.”

At UC Davis, Ehler battled pests such as obscure scale and aphids on oaks, stink bugs on tomato, aphids on sugar beet and white fir, and beet armyworm on alfalfa and sugar beet. His expertise ranges from the theory and practice of biological control to the ecology and management of insects and mites in natural, agricultural and urban environments.

“When biocontrol is successful, it's permanent,” Ehler said. “Pesticides are no longer needed. You can get complete success with biological control, but it must be very specific to the pest to eliminate unwanted environmental effects."

In the late 1990s, Ehler discovered that pill bugs, also known as roly-poly bugs, prey on the eggs of stink bugs. Up to then, most entomologists classified pill bugs as strictly vegetarians. Stink bugs, major agricultural pests, suck the juices from legume and brassica seeds and fruit of other crops.

In the early 1980's, Ehler led the Davis team that documented the environmental impact of malathion-bait sprays used to eradicate the Mediterranean fruit fly. The organophosphate was credited with killing the medfly, but also beneficial insects such as honey bees, and natural enemies of various insect pests.

In one study, Ehler assessed the non-target effects of malathion in the Bay Area. His studies in Woodside, a San Mateo County community on the San Francisco Peninsula, revealed that populations of a native gall midge exploded 90 times the normal level. Ehler compared the gall midge population in Woodside -- where planes sprayed up to 24 malathion applications -- to the untouched Jasper Ridge Biological Preserve near Stanford University. The gall midge is a gnatlike insect pest that lays its eggs in plants; the burrowing larvae form galls.

“For many years, Les maintained his own USDA-certified quarantine laboratory which allowed him to work with biological control agents from all over the world,” Parrella said. “He was a meticulous researcher who maintained a ‘hands-on' approach with all the projects done in his laboratory and he trained many students who are now leaders in the field of biological control around the world.”

“The stink bugs were overwintering in his backyard and in the spring, emerging to dine on mustard and then tomatoes,” Ehler said. “Stink bugs don't seem to prefer tomatoes — they like mustard and wild radish — but when these hosts were plowed under and no longer available, the bugs went for the tomatoes.” Solution: Don't cut the mustard. Plow it under only when the stink bugs aren't a threat to the tomatoes — that is, before they develop wings and disperse.

“Les was most helpful,” said Ramming, who began Pacific Star Gardens 15 years ago and grows tomatoes, melons, strawberries, blackberries, apricots and other produce on his 40-acre farm. “Les determined what stink bugs prefer, their habitat and where they were overwintering,” he said. “We planted a five-foot strip of ‘trap' or ‘bribe' crops (mustard and wild radish) around the tomato fields and got rid of 90 percent of the stink bugs.”

“I greatly admire Les for his contributions to IPM that have helped us better understand the biology of some of our major agricultural pests and how to manage them,” she said. “Les is one of those extraordinary field researchers with a broad knowledge of entomology that make him a great resource for information. In collaborating with Les on various projects I have a much better understanding on how landscapes impact IPM in cropping systems which I believe will help conservation efforts and improve pest control in our agricultural systems.”

Ehler, born in Lubbock County, Texas and reared on a family farm near the small town of Idalou, received his bachelor's degree in entomology from Texas Tech University, and his doctorate in entomology from UC Berkeley. He joined UC Davis in 1973 as an assistant professor, advancing in 1985 to professor of entomology and entomologist in the UC Davis Experiment Station.

Ehler's retirement plans include helping with a stink bug project directed by researchers at UC Berkeley. And fishing with fellow entomologists Larry Godfrey and Harry Kaya, farm advisors Gene Miyao and Mario Moratorio, and weed scientist Tom Lanini. An avid fisherman, Ehler plies the waters of the Sacramento-San Joaquin River Delta and Lake Berryessa in his 18-foot boat. His catches include a 44-pound salmon in the Sacramento River.

One net for another. 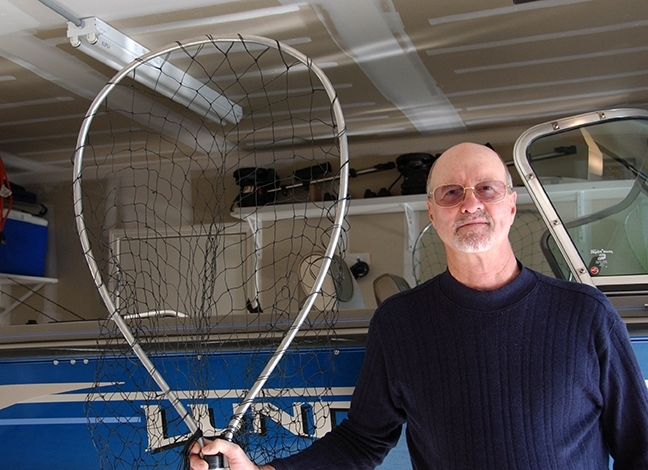