Investment in training new farmers is paying off
Published on: October 24, 2017

Training people to farm is successfully preparing them for careers, according to a new report from the National Sustainable Agriculture Coalition. Their report, “Cultivating the Next Generation,” evaluates the U.S. Department of Agriculture's (USDA) Beginning Farmer and Rancher Development Program, which was funded in the 2008 Farm Bill.

Since 2008, USDA has invested roughly $150 million in more than 250 new farmer training projects across the country.

According to a national survey, Beginning Farmer and Rancher Development Program-funded project leaders estimated that over half of their participants are now engaged in a farming career, and that nearly...

The 100 miles between the agricultural fields that surround Davis, Sacramento and the Sierra Foothhills and the culinarily rich city of San Francisco can seem vast to farmers who lack the connections needed to market their produce to Bay Area buyers.

That gap was bridged last week for a group of 25 small, beginning and ethnic farmers when the Agricultural Sustainability Institute (ASI) at UC Davis and the Sacramento County UC Cooperative Extension hosted a day-long bus tour that began in Sacramento early Tuesday morning. Farmers boarded a bus bound for the Bay Area, where they met wholesale food buyers.

“Many buyers are eager to meet small-scale farmers who can supply the rapidly expanding market for... 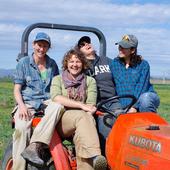 Tomatoes grow fine in my Sacramento backyard. I can usually count on plenty of basil, more zucchini than the neighbors will take, some snow peas, chard and kale, a few small peppers and eggplants and whatever salad greens survive the slugs (in other words, lots of arugula). We have oranges and grapefruit, but I wouldn't even try to grow peaches or apricots. It takes a farmer to grow peaches. It takes a good farmer to grow good peaches. It takes a good farmer and good weather to grow Blenheim apricots.

Instead of planting a peach tree, I joined a fruit community supported agriculture (CSA) program, promising to pay $15 a week for a...