This partnership will provide $1.1 million to hire 10 UC Cooperative Extension community education specialists who will be deployed to 10 counties statewide to assist and encourage farmers to participate in CDFA programs aimed at increasing adoption of smart farming and ranching practices. 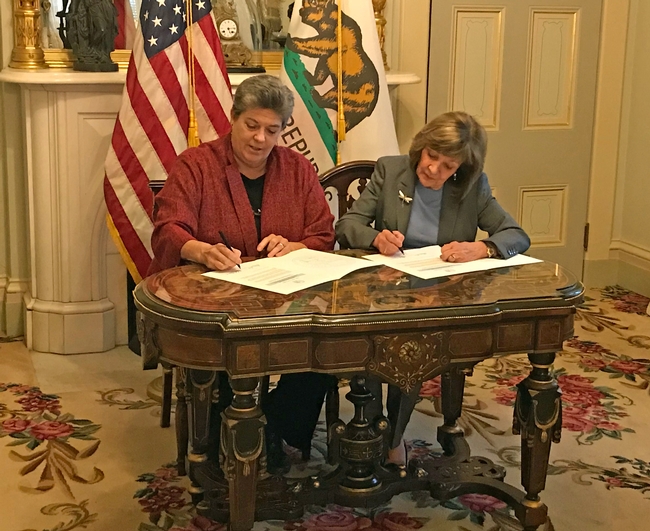 “Agriculture is an important part of the climate solution,” Ross said. “This funding enables CDFA and UC ANR to partner with farmers to scale-up climate smart agricultural practices.”

The new program is funded by California Climate Investments dollars through the Strategic Growth Council (SGC),

“Farmers and ranchers are key to carbon sequestration and a sustainable California,” said SGC chair Ken Alex.  “The Strategic Growth Council is pleased to fund this partnership for smart agricultural practices.”

The CDFA programs involved are: 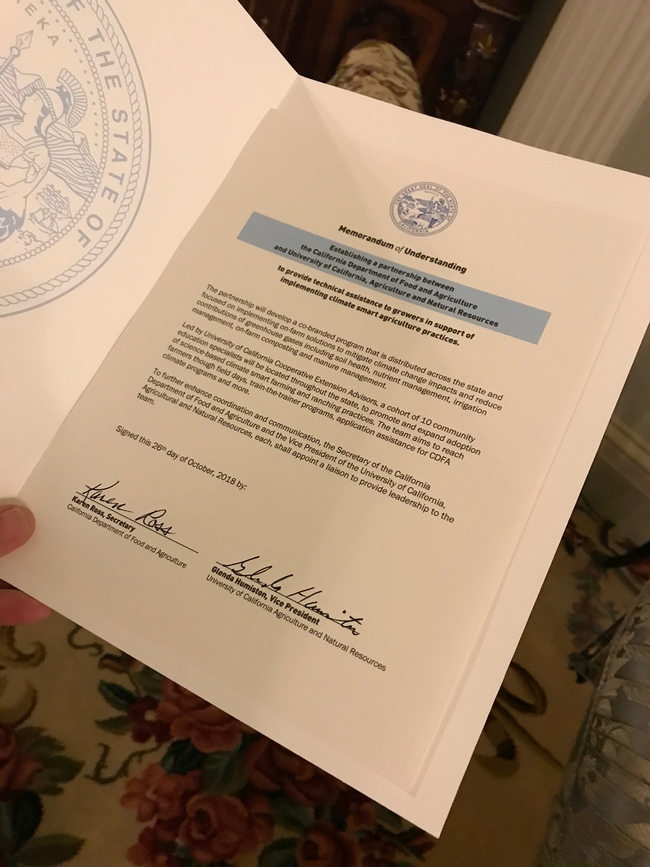 “This new joint effort reflects our commitment to extending research-supported solutions to our farming community so they have the information and tools they need to make climate-smart decisions,” Humiston said. “It also demonstrates our shared goal of promoting new practices that are grounded in science.”

In addition to working with the new educators, the UCCE advisors conduct research on farming and ranching practices that boost efficiency and protect the climate, therefore serving as a conduit between discovery and implementation.

“This is a great opportunity to really support growers find the right balance between food production and effective management of natural resources,” Ahiablame said. “With the 10 community education specialists we will be one step closer to the producers across the state. I look forward to the opportunity to mentor these specialists, who in turn will be making direct impacts on the community.”

Karle said she was interested in participating in the program as a way to encourage dairy operators to try practices they are interested in but consider too costly.

“I've worked here locally with dairy producers who wanted to implement practices but need financial assistance in order to make it feasible,” Karle said. “They need assistance in the grant application process and technical support to make changes on their farms.”

Doug Parker, director of the UC California Institute for Water Resources, is the UC ANR point of contact and liaison with CDFA. To contact Parker, email doug.parker@ucop.edu. 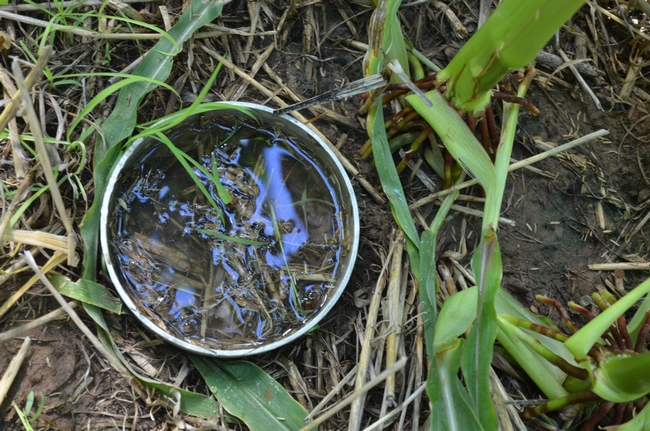 The rapidity of water infiltration into the soil is a measure of soil health. Building soil health is one of the areas in which the UC ANR-CDFA partnership will help farmers implement climate-smart farming.
Focus Area: 4-H
Focus Area Tags: 4-H
Tags: agriculture (6), climate change (33), Doug Parker (2), Glenda Humiston (1)
Comments: 0
Is This El Niño Really Set to Bring Epic Precipitation? Be Careful What You Wish For…
Published on: November 30, 2015

With perhaps one of the most intense El Niño ever recorded simmering like a massive coddled egg off the coast, Californians are bracing for precipitation on an epic scale. More than that: They're hoping for it. There is a general sense that even the rampaging floods that can result from a full-blown El Niño-driven winter would be tolerable as long as our reservoirs fill and aquifers recharge and we can get back to long showers and adequately watered hydrangeas.

This is a good place to insert a couple of caveats. First, choose your wishes carefully. Recall, if you were in California at the time, the great El Niño of 1997-98, and the vivid images it provided of nature running amok: Highway 70 disappearing into the vast, churning inland sea that was once the Yuba River, with dead cows, outbuildings and giant hissing propane tanks bobbing downstream. That was the year the dikes failed on the Feather River, and thousands of Yuba City residents fled the rising waters.  After it was all over, one staffer with the U.S. Army Corps of Engineers chatted off the record, and said there had been very real fears that Folsom reservoir could have overtopped its dam. If that had happened, much of Sacramento would have flooded. People would have died. Four years of drought may have made people forget that California can be blighted by too much water as well as too little.

Second, observes Doug Parker, the director of UC's California Institute for Water Resources, the rain and snow may fizzle. A robust El Niño is no guarantee of record rainfall and snowpack.

“In fact, the research indicates a wet year for Southern California, but there's less confidence about a lot of precipitation for the north state, particularly in terms of snow,” says Parker.

And we need snow more than we need rain. Parker notes that intense rainfall can produce too much water too fast at the lower elevations and melt snow at the higher elevations. In such cases, the state's dams and reservoirs have to function as flood control structures; much or most of the water is shunted rapidly to the sea, not stored.

One wet winter could put a lot of water in our reservoirs and maybe help replenish some aquifers, but it will do nothing to address demand.

Further, cautions Parker, even an optimal El Niño that dumps heaps of snow in the Sierra without swamping the lowlands with Pineapple Express deluges may not get us back to “normal.” That's because surface water is only part of the issue. Brimming reservoirs alone cannot slake the state's thirst.  According to theCalifornia Department of Water Resources, groundwater constitutes between 30 to 46 percent of the state's total water supply. Despite recent legislation to monitor and control groundwater withdrawals, pumping remains largely unregulated, and many of the state's aquifers are in “overdraft,” with more water being sucked up and out than trickling back underground. The results of this excessive pumping are particularly evident in the San Joaquin Valley, where massive ground subsidence—a sudden sinking or gradual sinking of the Earth's surface— is occurring as groundwater is withdrawn.

These effects are not temporary. Ground subsidence can destroy aquifer structure, reducing long-term storage capacity. And while heavy rains and deep snowpack are essential for recharging aquifers, the process isn't necessarily a rapid one.

“There are some areas where recharge happens fairly quickly, particularly if combined with decreased pumping,” Parker says. “But other areas may require decades or centuries to replenish. Also, you have to consider what you mean when you say ‘recharge.' In the Tulare Basin, the water table has fallen by hundreds of feet, it keeps dropping, and the pumping continues. So what does ‘recharge' mean? Getting water back up to 300 feet from 400 feet? What's your baseline? When water is that deep, it's unlikely you could get any significant or long-term replenishment from one year, especially considering the ongoing demand.”

And that may well be the ultimate rub: Demand. The problem with a state that has so many people and so much intensive agriculture is that water demand is by no means static. It's constantly moving, but it only moves one way: upward. No matter how much water we get, there will always be someone clamoring for it. Water rights claims exceed the amount of the state's developed water—the water controlled and distributed by government agencies—by 5.5 times. Even during the last four years of devastating drought, thousands of acres of new almond orchards have been planted in the Sacramento and San Joaquin Valleys, and almonds are a water-intensive crop, each tree requiring heavy irrigation for its entire productive span.

“One wet winter could put a lot of water in our reservoirs and maybe help replenish some aquifers, but it will do nothing to address demand,” says Parker, “so ‘getting back to normal' doesn't really speak to the biggest issues. People will always have a use for any water that's available. If we want a truly sustainable water policy, we can't be reactionary. We can't look at this from the perspective of one year, or a few years. We have to take a long-term view.”