Reducing wildfire risk includes building communities to coexist with fire
Published on: May 11, 2020 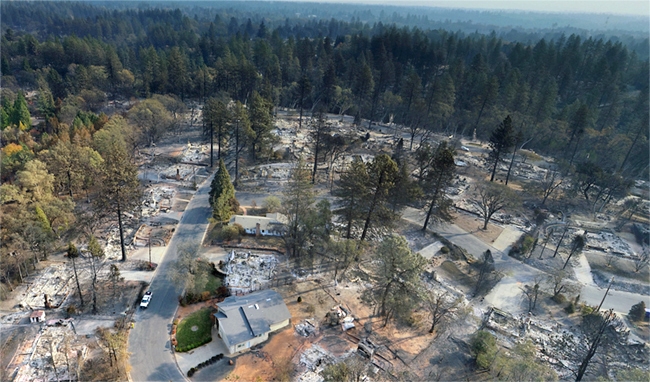 Drone imagery of a Paradise neighborhood after the 2018 Camp Fire.

The Camp Fire that destroyed the town of Paradise and other wildfires that have devastated communities in recent years have convinced wildfire experts that Californians need to take more than one approach to coexist with fire.

To better protect new houses against wildfire, California has building codes, but where residential communities are built on the landscape and how they are designed are also very important to limit wildfire-related losses, according to University of California Cooperative Extension specialists Max Moritz and Van Butsic.

“Defensible space and vegetation management is important, but in the long term, where and how we build new developments will be equally important for keeping Californians safe,” said Butsic, who studies land use.

To develop their recommendations for reducing wildfire risk for future community development, Moritz, who specializes in wildfire, and Butsic reviewed fire studies and consulted firefighters and community planners. 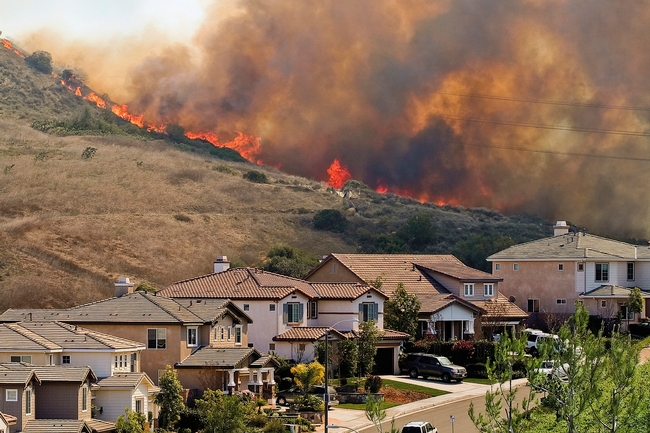 To build on fire-prone landscapes, we need better guidance on where and how to safely build our communities.

Their new publication, “Building to Coexist with Fire: Risk Reduction Measures for New Development,” is designed for city planners, fire districts and communities to incorporate community-scale risk reduction measures when building or rebuilding in fire-prone areas.

“There is currently little codified guidance for where and how to build our communities in California, aside from building codes for individual structures and a few requirements for road access and water supplies,” said Moritz, who is based at UC Santa Barbara.

Wildfire consultant and architect David Shew, who retired as a CAL FIRE chief after 31 years, said, “I can state without hesitation that the land use planning principles and design recommendations identified in this study are necessary steps to help increase wildfire resiliency to existing and future communities.  Being a first-hand witness to the increasingly destructive nature of wildfires, I can attest to the value and necessity for these improvements to be integrated into our built environment.  This should become a much-used reference for every planning and fire official who face wildfire impacts.”

Clustering homes is safer because the agricultural land (shown as striped rows) provides a protective buffer. This pattern of development also is easier to defend from fire and requires fewer fire suppression resources. Source: Fire Mitigation in the Wildland Urban Interface

To reduce fire vulnerability of communities, Moritz and coauthor Butsic, who is based at UC Berkeley, recommend including fire professionals and biological resource experts early in the community planning process. They also recommend considering the placement of communities on the landscape, such as near bodies of water and agricultural land, and how they are laid out to minimize exposure to wildfire. Key considerations include defensibility, risk of ignition and ease of evacuating residents.

“This report provides both a robust justification for integrating resilience practices into land use planning and community design, and a toolbox for doing so,” Sarah G.Newkirk, director of disaster resilience with The Nature Conservancy in California. “The risk reduction measures described can be put to use immediately – ideally in combination with each other – both in ongoing wildfire recovery planning, and in local hazard mitigation planning. Furthermore, the report should be a wake-up call to FEMA to think broadly about how best to support wildfire mitigation in California.”

To more efficiently reduce fuel in new communities, Moritz and Butsic write, “The design, maintenance and use of defensible space for fire protection is easier when neighborhoods are developed more densely and are built to stringent fire-resistant building codes.”

Development near slopes should be set back far enough from the slope’s edge to provide safety from flames moving up the slope or lapping over the edge. The safety area depends on the height of buildings and potential flame lengths of burning vegetation on the slope.

In the 31-page publication, they present risk reduction measures for four design contexts:

They provide examples for each risk reduction measure, along with some discussion of challenges associated with each measure.

“Our hope is that this guidance will be helpful for agency personnel involved in evaluating and approving future development in California,” Moritz said. “Because there is a pressing need for additional housing in California, communities must be built with design principles that make them safer to inhabit and less vulnerable to inevitable wildfires.”

The publication “Building to Coexist with Fire: Risk Reduction Measures for New Development” can be downloaded for free at https://anrcatalog.ucanr.edu/Details.aspx?itemNo=8680.

Google Earth Image of a cannabis grow site. The resolution of Google Earth images allowed the researchers to detect marijuana plants that were previously missed with other remote sensing techniques.

As policy liberalization rapidly transforms the multi-billion-dollar cannabis agriculture industry in the United States, the need for regulation and assessment of environmental impacts becomes increasingly apparent.

Published this spring in Environmental Research Letters, the study focused on the “emerald-triangle” in northern California's Humboldt, Mendocino, and Trinity counties, which many believe is the top cannabis-producing region in the United States.

The UC Berkeley-based Butsic and his co-author Jacob Brenner used Google Earth imagery to locate and map grow sites (both greenhouses and outdoor plots) in 60 watersheds. Most cannabis grow sites are very small, and have gone undetected when researchers used automated remote sensing techniques, which are commonly used to detect larger changes such as deforestation.

“We chose to use fine-grained imagery available in Google Earth and to systematically digitize grows by hand, identifying individual plants. Most plants stand out as neat, clear, little circles,” said Brenner, who is on the faculty of the Department of  Environmental Studies and Science at Ithaca College. “The method was laborious — it took over 700 hours — but it proved to be highly accurate.”

Butsic and Brenner paired their image analysis with data on the spatial characteristics of the sites (slope, distance to rivers, distance to roads) and information on steelhead trout and Chinook salmon, both of which are listed as threatened species under the federal Endangered Species Act. These and other species are vulnerable to the low water flows, soil erosion, and chemical contamination that can result from nearby agriculture.

Results of the study show 4,428 grow sites, most of which were located on steep slopes far from developed roads. Because these sites will potentially use significant amounts of water and are near the habitat for threatened species, Butsic and Brenner conclude that there is a high risk of negative ecological consequences.

“The overall footprint of the grows is actually quite small [~2 square kiliometers], and the water use is only equivalent to about 100 acres of almonds,” says Butsic, who is in the Department of Environmental Science, Policy, and Management at Berkeley. According to Butsic, California currently has more than one million irrigated acres of almonds.

He stresses that the issue lies in the placement of the sites: “Close to streams, far from roads, and on steep slopes — cannabis may be a case of the right plant being in the wrong place.”

Last year, California legislature passed laws designed to regulate medical marijuana production, and state voters will weigh in on whether to legalize recreational marijuana this coming fall. Given these changes as well as the profitability of cannabis production, Butsic expects that marijuana cultivation will expand into other sites with suitable growing conditions throughout the region. He and Brenner assert that ecological monitoring of these hotspots should be a top priority.

Bills recently signed into law by Governor Jerry Brown have made some advances in this direction — requiring municipalities to develop land use ordinances for cannabis production, forcing growers to obtain permits for water diversions, and requiring a system to track cannabis from when it is first planted until it reaches consumers.

But the researchers say that regulation will likely be a constant challenge because it will rely on monitoring procedures that are just now emerging, as well as voluntary registration from producers and budget allocation from the state for oversight and enforcement.

“Some of the same fundamental challenges that face researchers face regulators as well, primarily that cannabis agriculture remains a semi-clandestine activity,” says Brenner. “It has a legacy of lurking in the shadows. We just don't know — and can't know — where every grow exists or whether every grower is complying with new regulations.” Beyond climate change, humans contribute another set of factors that influence wildfires, including where structures are built, and the frequency and location of ignitions from a variety of sources—everything from cigarettes on the highway, to electrical poles that get blown down in Santa Ana winds.
A new study examining wildfires in California found that human activity explains as much about their frequency and location as climate influences. The researchers systematically looked at human (anthropogenic) behaviors and climate change together, which is unique and rarely attempted on an area of land this large.

The findings suggest many models of wildfire predictions do not accurately account for anthropogenic factors and may therefore be misleading when identifying the main causes/drivers of wildfires. The newest model proportionately accounts for climate change and human behavioral threats and allows experts to more accurately predict how much land is at risk of burning in California through 2050, which is estimated at more than 7 million acres in the next 25 years.

Climate change affects the severity of the fire season and the amount and type of vegetation on the land, which are major variables in predicting wildfires. However, humans contribute another set of factors that influence wildfires, including where structures are built, and the frequency and location of ignitions from a variety of sources—everything from cigarettes on the highway, to electrical poles that get blown down in Santa Ana winds. As a result of the near-saturation of the landscape, humans are currently responsible for igniting more than 90 percent of the wildfires in California.

“Individuals don't have much control over how climate change will effect wildfires in the future. However, we do have the ability to influence the other half of the equation, those variables that control our impact on the landscape,” said Michal Mann, assistant professor of geography at George Washington University and lead author of the study. “We can reduce our risks by disincentivizing housing development in fire-prone areas, better managing public land, and rethinking the effectiveness of our current firefighting approach.”

The researchers found that by omitting the human influence on California wildfires, they were overstating the influence of climate change. The authors recommend considering climate change and human variables at the same time for future models.

“There is widespread agreement about the importance of climate on wildfire at relatively broad scales. At more local scales, however, you can get the story quite wrong if you don't include human development patterns,” said co-author Max Moritz, UC Cooperative Extension fire ecology specialist whose lab is at the University of California, Berkeley. “This is an important finding about how we model climate change effects, and it also confirms that getting a handle on where and how we build our communities is essential to limiting future losses.”

Between 1999 and 2011, California reported an average of $160 million in annual wildfire-related damages, with nearly 13,000 homes and other structures destroyed in so-called state responsibility areas - fire jurisdictions maintained by California, according to Mann. During this same period, California and the U.S. Forest Service spent more than $5 billion on wildfire suppression.

In a model from 2014 that examined California wildfires' destruction over the last 60 years, Dr. Mann estimated that fire damage will more than triple by mid-century, increasing to nearly half a billion dollars annually. “This information is critical to policymakers, planners, and fire managers, to determine wildfire risks,” he said.

The paper, “Incorporating Anthropogenic Influences into Fire Probability Models: Effects of Human Activity and Climate Change on Fire Activity in California,” published Thursday in PLOS ONE.