Giants round third base with a little help from their fungus friends
Published on: December 19, 2012

The vast majority of trees have roots that interact with below-ground fungi, together forming a 2-species complex known as mycorrhizae. In our study, which was recently published in the journal, Mycologia, we looked at the way roots of giant sequoia seedlings formed mychorrhizae relationships and how that influenced the growth of giant sequoia seedlings. Learning about how giant sequoia seedlings grow is particularly important since seedling establishment in giant sequoia has been below what is needed for long-term sustainability. We found that when we planted giant sequoia seedlings, beneficial fungi would attach on to the seedling’s roots mainly when the seedlings were planted in open sunny conditions. While it was hypothesized that the fungi would not be as common on roots in areas that had been burned, there was no difference between burned and unburned locations. Also interestingly, the beneficial fungi actually seemed to outcompete harmful fungi, thus possibly helping seedlings to avoid other diseases. This mycorrizal interaction between tree and fungus is a potentially important requirement for giant sequoia to grow fast as a seedling, and may be a key ingredient in how it eventually becomes the world’s largest organism. The triple crown of resources: Light, water, and nutrients

Nature is dominated by individualistic, chaotic, and brutal selfishness. Organisms are hard wired to have a primary goal- to reproduce. Often, plants achieve this goal at the expense of other organisms via a fierce competition for the triple-crown of resources: light, water, and nutrients (it’s a baseball theme today). But sometimes it is in an organism’s best interest to be of assistance to another. Such is the case with mycorrhizae, which is a combination of plant roots and fungi attached to each other (“myco” = fungi; “rhizae” = roots).

Giant sequoia is an interesting species because it is so different than any other in so many ways. The most obvious difference that people know about is its tremendous size- larger than any other tree on earth. But the way that it reaches this size, and in fact its entire “life history strategy” is somewhat of an outlier when you compare it to other tree species. All trees form mychorrhizae, but the way in giant sequoia forms this relationship with fungi also appears to be an outlier. It forms what are known as “arbuscular mycorrizae,” which is uncommon in conifer trees. Beyond that, not much is known about this plant-fungus interaction in giant sequoia, but this study offers some insight. The primary relevance to landowners and stakeholders might be that this research reminds us that planting a tree and getting it to survive and grow is a complex, ecological process. It is important to understand how planted seedlings survive and grow because planting is something we might be doing a lot more of in forests, as climate change and wildfires become forces that hinder natural regeneration across larger and larger areas. Successfully planting a tree, where the measure of success is getting the tree to complete its life cycle (i.e. to reproduce), involves much more than planting a tree and walking away. It involves understanding the resource requirements for that species, and how that particular tree will be able to make its way up into the canopy to become mature. For giant sequoia, and most other trees, the mutualistic interaction that seedlings will have with root colonizing fungi is key information. This study suggests that planted giant sequoia seedlings have the best chance of success when they are placed in distinct canopy openings in sunny conditions, in part because this is where the mutualistic relationship with fungi can benefit giant sequoia most by helping it to grow quickly into the tall canopy above.

By the way, I think most green campaigns that ask you to pay a little extra so that you can sponsor the planting of tree seedings are scams. I would not advise believing or certainly not paying for such “plant-a-tree campaigns” unless you know the species that is being planted, the location, and the method to be used for tracking survival. Imagine that giant sequoia is a base runner, where rounding third means going home, which in terms of a tree is equivalent to reaching the canopy and reproducing (and for a person on a date, this is of course equivalent to something similar).

The fungus that forms the mycorrhizae is the third-base coach, hoping to be of some assistance to the base runner but hoping to get something in return (a job).

Get it? Giant sequoia seedlings are happy to have this relationship with fungi, but only when things are already going well. Mycorrhizae were more common on seedlings when they were planted in the open, so there was plenty of carbon for the seedling to spare. It is carbon that is the currency paid by the tree, in return for nutrients like Phosphorous from the fungus. And fungus can also keep the plant out of trouble by fighting off pathogenic fungi, kind of how a third base coach can tell the runner to get back when the pitcher tries to pick them off.

Implications? If you plant giant sequoia, do so in distinct canopy openings and pay attention to how the nursery either sterilized or inoculated the soil. In this case, the nursery had sterilized the soil so the mycorrhizae developed on roots after the seedlings were planted in the field. When you plant far away from a mature forest edge, don’t worry about it taking a long time for fungus to colonize the area- they are probably already there because of lateral roots from surrounding trees. 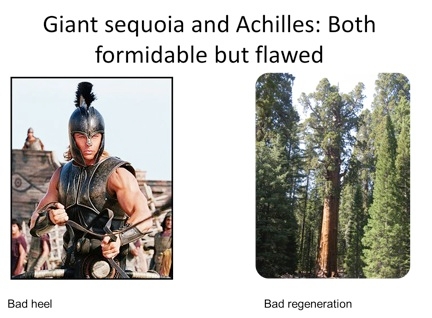