One of our talented Master Gardeners, Judi Gerber, is also a historian who has recently published the book Farming in Torrance and the South Bay from the Arcadia Press “Images of America” Series.

The book is loaded with photos of Torrance and surrounding communities from the days, not so long ago, when LA County’s South Bay was home to major agriculture, including flower farms, hay and bean production, dairies and much more. Judi shares great information: for example, I never knew that Gardena was once known as the “Berry Capital of Southern California” and that Lomita once billed itself as the “Celery Capital of the World”.
An image Judi shares in the book is that of flower stalls all along Pacific Coast Highway, selling the snapdragons, carnations and marigolds produced in the flower fields of Redondo and Hermosa Beach during the first half of the 20th Century. Contrast this early, pastoral Pacific Coast Highway with today’s strip-mall lined, traffic-jammed PCH. It is a vivid example of how much Los Angeles has changed in a few short decades.
I asked Judi how she became interested in local agricultural history. She was born in the South Bay, grew up in Torrance, and remembers visiting a local dairy as a child. As an adult, she became involved with the Torrance Farmer’s Market, and saw a need to let people know about the remaining local farming community and how to preserve it. Along with a busy career in public administration, she began a study of local farming history. Older residents of the area were very helpful, offering stories and photos, eager to share this part of their past.
As her history project evolved, she somehow managed to squeeze in volunteer work with our Master Gardener Program. As a UC Master Gardener, she leads a gardening program for senior citizens at Bartlett Senior Center in Torrance.
She also blogs as “LA Farm Girl” at http://www.lafarmgirl.blogspot.com/ and has published a variety of articles about farming in California. “My goal is to get people to support small farmers and become more aware of city farming”, said Judi. “California still produces more than half of our nation’s fruits and vegetables. As urban dwellers we often forget that. It’s a story that needs to be told.” 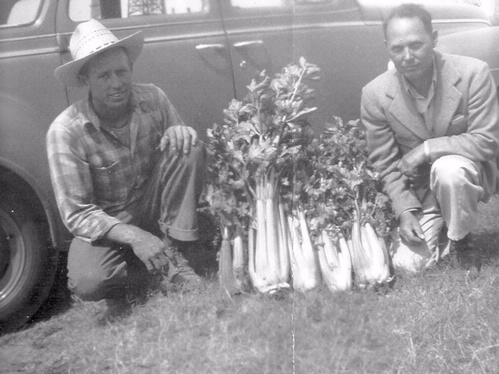 Cooperative Extension has a wonderful resource that I’d like people to be more aware of: our amazing Master Gardener Volunteers.  We have more than 200 MG volunteers, as we call them.

The Master Gardener Program officially began in 1978.  We maintained the program on and off over the years, depending on staffing and interest.  By the early 1990s, however, our program in Los Angeles County was inactive.  That is, until Yvonne Savio, coordinator extraordinaire joined our staff in 1995 and immediately restarted the program.  It’s been going strong ever since.

Master Gardeners participate in extensive training then volunteer with us in a variety of ways, mostly focused on improving food access in low-income communities.  Last year our Master Gardeners reached more than 87,000 people in Los Angeles County, working with community gardens, school gardens and answering calls on our Master Gardener Helpline.

The Helpline is a free service for Los Angeles County residents.  Anyone can call or email the Helpline with their home gardening questions.  The Master Gardener Helpline is available by phone at (323) 260-3238 or email at mglosangeleshelpline@ucdavis.edu.

Yvonne and the Master Gardeners have been featured in the media twice in the past week.  The Los Angeles Times ran a story on Victory Gardens on January 10th, and included a mention of how our Master Gardeners have helped to promote food gardening around Los Angeles. The Times article discussed how interest in gardening is cyclical, and that when economic times are difficult, more people garden.  For example, the article mentions that a major seed company experienced a 40% increase in its sale of vegetable and herb seeds in 2007.   You can view the story at www.latimes.com/features/home/la-hm-victory10-2009jan10,0,7167635.story

Our Master Gardener program was also featured on Evan Kleiman’s “Good Food” Show on KCRW on January 10th.  You can listen to the interview with Yvonne at www.kcrw.com/etc/programs/gf/gf090110australian_olive_oil